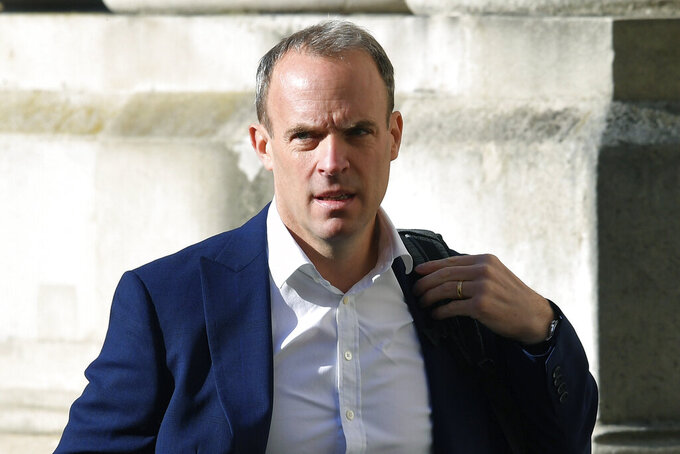 Toby Melville, ASSOCIATED PRESS
FILE - In this Thursday, Sept. 1, 2020, file photo, Britain's Foreign Secretary Dominic Raab arrives to attend a cabinet meeting of senior government ministers at the Foreign and Commonwealth Office FCO in London. Raab is heading to Southeast Asia Monday, June 21, 2021, on start a three-nation trip as London looks to promote closer ties and trade with the region following its exit from the European Union. (Toby Melville/Pool via AP, File)

BANGKOK (AP) — Britain's top diplomat arrived in Southeast Asia late Monday on a three-nation visit as his country looks to promote closer ties and trade with the region following the U.K.'s exit from the European Union.

Foreign Secretary Dominic Raab's trip to Vietnam, Cambodia and Singapore comes the week after Britain announced the broad outlines of a free trade deal with Australia, the first the country has negotiated from scratch since it left the EU.

That deal was expected to boost trade between the two nations, and the British government said it hoped it would also help it join a regional trade agreement that would open the door to increased trade throughout the Asia-Pacific region.

A recent British government review of defense and foreign policy recommended that the U.K. “tilt” its focus toward the Indo-Pacific region in response to China’s growing influence on the world stage.

Tweeting after his arrival in Hanoi, Raab said he would use the visit to discuss the new policy direction.

Raab has said the shift includes a greater emphasis on common strategic interests in the region, which goes beyond trade to also include issues such as maritime security and climate change.

As part of the initiative, Britain earlier this year dispatched a strike group led by the Royal Navy’s flagship aircraft carrier the HMS Queen Elizabeth on a 28-week deployment to Asia that Prime Minister Boris Johnson insisted was not meant to be confrontational toward China.

“One of the things we’ll be doing clearly is showing to our friends in China that we believe in the international law of the sea and, in a confident but not a confrontational way, we will be vindicating that point,” Johnson said in May before the carrier group sailed from Portsmouth.

Raab is to hold talks with Vietnamese officials Tuesday and speak at an event held by the 10-country Association of Southeast Asian Nations, or ASEAN.

A meeting with Cambodian Prime Minister Hun Sen scheduled for Wednesday was canceled after Hun Sen announced he had been indirectly exposed to COVID-19 and was quarantining as a precaution.

Raab is to meet with his Cambodian counterpart, however, along with other officials in a visit that the Cambodian Foreign Ministry said it hoped would strengthen bilateral ties, as well as help “multilateral cooperation within the ASEAN framework.”

Raab's trip wraps up Thursday in Singapore, where he is to meet with the prime minister and other officials, as well as business leaders.