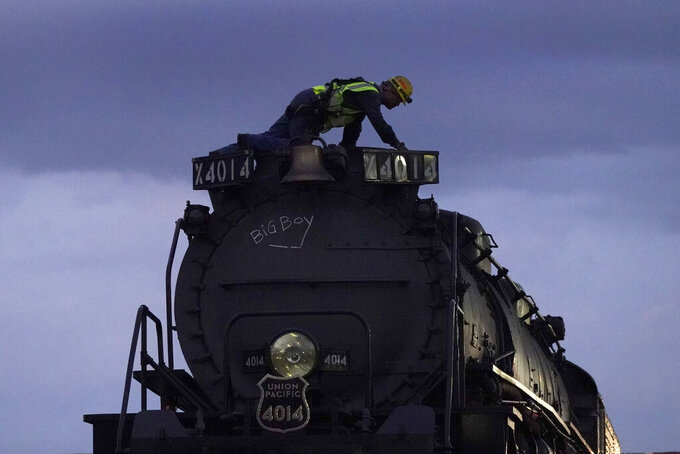 Charlie Riedel, ASSOCIATED PRESS
FILE - In this Aug. 31, 2021, file photo, a worker tends to the world's largest operating steam locomotive, Union Pacific's Big Boy No. 4014, during an overnight stop in Kansas City, Mo. Cheyenne-based Big Boy No. 4014 returns home Tuesday, Sept. 7, 2021, from a month long tour of the nation. Led by Ed Dickens, the Union Pacific Heritage Steam program's showpiece is the massive locomotive that concluded its restoration in 2019 with a tour that marked the 150th anniversary of the completion of the Transcontinental Railroad, which became known as the "overland route" which linked the nation. (AP Photo/Charlie Riedel, File)

Led by Ed Dickens, the Union Pacific Heritage Steam program’s showpiece is the massive locomotive that concluded its restoration in 2019 with a tour that marked the 150th anniversary of the completion of the Transcontinental Railroad, which became known as the “overland route” which linked the nation.

The steam locomotive, along with 15 support and vintage railcars, is expected to arrive at the Steam Shop in Cheyenne at about 1:45 p.m. Tuesday. It should be visible on track on the east end of town starting at about 1 p.m, arriving from Greeley, Colorado, its last official stop before arriving home in Cheyenne.

Right now, Big Boy is making its way across Kansas, and is expected to arrive at Union Station in Denver on Monday, The Cheyenne Post reports.

Dickens runs the Steam Shop and the UP’s Heritage program, and he is usually found in the engineer’s seat on Big Boy while it is under way. Ed provided exclusive comments to The Post about the 2021 tour:

Speaking about the 2021 tour in general, Dickens said, “It’s been excellent. Our collaboration with our colleagues across the Union Pacific has ensured that we’re consistently running on time, much to the delight of the huge crowds that have greeted us everywhere we’ve been.”

The completely rebuilt vintage steam engine has been running great during this tour. Dickens said, “Number 4014 has performed outstandingly throughout the trip. All of the long hours we put into its restoration and continuing maintenance are paying off. It’s running great, but we’re always looking for ways to make it run more efficiently and flexible from a logistics perspective.”

Dickens and his team converted the Big Boy from coal fuel to oil fuel, which helps make the engine run cleaner and more efficiently. This is the first major tour since that conversion to cleaner burning oil fuel. Due to the restoration, No. 4014 is likely in better condition now then when it was new. It’s also been upgraded with all modern railroad electronics, including Positive Train Control (PTC), Cab Signaling, communications, and more.

The world knows that Cheyenne is home to Big Boy – and Dickens said that it “absolutely does” help increase awareness of Cheyenne as a railfan and tourist destination. “ In every city and town we visit, we introduce the Big Boy to new railfans who can’t get enough of it.”

Ed Dickens said that when the tour concludes in Cheyenne next Tuesday, the UP steam crew will have put 3,800 miles of track behind them. And they are anxious to get home. He said, “It’s time to reconnect with our families after spending the last few weeks 100% dedicated to our steam program.”

Twenty-five Big Boys were built exclusively for Union Pacific Railroad, the first of which was delivered in 1941. The locomotives were 132 feet long and weighed 1.2 million pounds. Because of their great length, the frames of the Big Boys were “hinged,” or articulated, to allow them to negotiate curves. They had a 4-8-8-4 wheel arrangement, which meant they had four wheels on the leading set of “pilot” wheels which guided the engine, eight drivers, another set of eight drivers, and four wheels following which supported the rear of the locomotive.

The massive engines normally operated between Ogden, Utah, and Cheyenne. There are seven Big Boys on public display in various cities around the country. They can be found in St. Louis, Missouri; Dallas, Texas; Omaha, Nebraska; Denver, Colorado; Scranton, Pennsylvania; Green Bay, Wisconsin; and Cheyenne.

Big Boy No. 4014 was delivered to Union Pacific in December 1941. The locomotive was retired in December 1961, having traveled 1,031,205 miles in its 20 years in service. Union Pacific reacquired No. 4014 from the RailGiants Museum in Pomona, California, in 2013, and relocated it back to Cheyenne to begin a multi-year restoration process. It returned to service in May 2019.