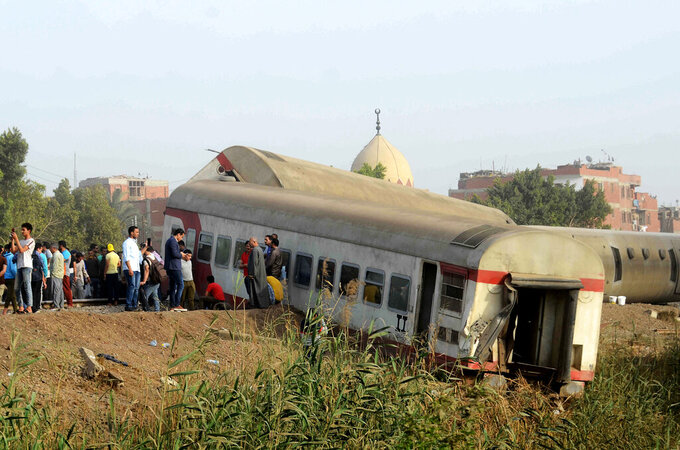 Tarek Wagih, ASSOCIATED PRESS
FILE - In this Sunday, April 18, 2021 file photo, people gather at the site where a passenger train derailed killing at least 11 people and injuring at least 98 others, near Banha, Qalyubia province, Egypt. Egypt’s transportation minister on Tuesday said he sacked the country’s top railway official, following three train accidents in less than a month that left at least 29 people dead and over 300 injured. (AP Photo/Tarek Wagih, File)

CAIRO (AP) — Egypt’s transportation minister on Tuesday said he sacked the country’s top railway official, following three train accidents in less than a month that left more than 40 people dead and over 350 injured.

The firing of Ashraf Raslan was part of an attempt to overhaul the rundown railway system’s leadership amid public outcry over repeated train crashes.

Raslan, who headed the railway authority since July 2018, was replaced by Mustafa Abuel-Makarm, Transportation Minister Kamal el-Wazir said in a statement.

The personnel changes included the main departments of the railway authority that manages train traffic in the Arab world’s most populous country. The goal is to “inject a number of competent professionals” as part of efforts to upgrade the poorly maintained network, the statement said.

The firing of Raslan came after a passenger train derailed Sunday north of Cairo. The country's top prosecutor said Tuesday that the casualty toll had risen to 23 dead and 139 wounded, up from the previously announced 11 dead and 98 wounded.

General Prosecutor Hamada el-Sawy ordered the detention of 23 railway employees, including the train driver and his assistant, pending an investigation into the crash.

He also summoned Raslan and Abuel-Makarm for questioning. Prosecutors have not concluded their investigation, the statement said.

After Sunday’s crash, President Abdel Fattah el-Sissi announced the establishment of an official commission to investigate its causes. Prosecutors also launched their own probe.

Last week, a train derailed in the Nile Delta province of Sharqia, injuring 15 people. On March 25, two passenger trains collided in the southern province of Sohag, killing at least 18 people and injuring 200 others, including children. Prosecutors blamed gross negligence by railway employees for that crash.

The country’s railway system has a history of badly maintained equipment and poor management.

The government says it has launched a broad renovation and modernization initiative, buying train cars and other equipment from European and U.S. manufacturers to automate the system and develop a domestic rail car industry.

El-Sissi said in March 2018 that the government needs about 250 billion Egyptian pounds, or $14.1 billion, to overhaul the rail system.

Hundreds of train accidents are reported every year. In February 2019 an unmanned locomotive slammed into a barrier inside Cairo’s main Ramses railway station, causing a huge explosion and a fire that killed at least 25 people. That crash prompted the then-transportation minister to resign.

Egypt’s deadliest train crash was in 2002, when over 300 people were killed after a fire broke out in an overnight train traveling from Cairo to southern Egypt.