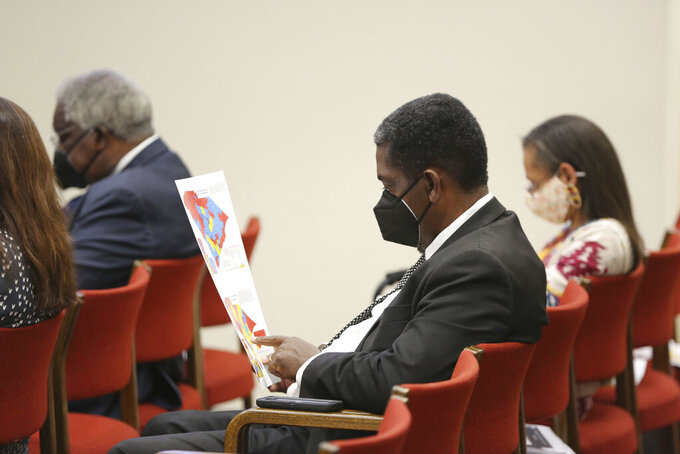 A trial to determine whether South Carolina’s congressional maps are legal closes Tuesday with arguments over whether the state Legislature diluted Black voting power by remaking the boundaries of the only U.S. House district Democrats have flipped in more than 30 years.

The trial also marks the first time the South Carolina maps have been legally scrutinized since the U.S. Supreme Court removed part of a 1965 law that required the state to get federal approval to protect against discriminatory redistricting proposals.

A panel of three federal judges on Tuesday heard closing arguments in the case in Charleston. A ruling is expected later and any appeal will be made directly to the U.S. Supreme Court.

The Republican-dominated General Assembly redrew the maps early this year based on the 2020 U.S. census, and they were used in this month's midterm elections.

According to a lawsuit filed by the NAACP, the new boundaries unconstitutionally split Black voters in the state’s 1st, 2nd and 5th Districts and packed them all into the 6th District, which already had a majority of African American voters.

The civil rights group has asserted during months of arguments that the General Assembly's actions not only diluted Black voting strength, but also strengthened the 6-to-1 advantage Republicans have in the state's U.S. House delegation. The last time a Democrat flipped a U.S. House seat was in 2018. Before that Democrats hadn't won a seat from Republican control since 1986.

The new congressional districts "render Black voters unable to meaningfully influence congressional elections in those districts,” the NAACP lawyers allege in the lawsuit.

Attorneys for state lawmakers said the 1st District had to have changes because much of South Carolina's more than 10% population growth from 2010 to 2020 happened along the coast.

The Legislature also insisted it followed guidance the U.S. Supreme Court laid out in 2013 when it overturned a provision of the 1965 Voting Rights Act requiring South Carolina and eight other mostly Southern states to get federal approval when they redrew district maps. The new maps are similar to the 2010 districts approved by federal officials.

The crux of the NAACP argument is that the Legislature ignored “communities of interest” in several regions of the state: places where voters share economic, social, historic or political bonds or are located within the same geographic or government boundaries.

They cited several plans lawmakers did not adopt that would have kept Charleston and surrounding areas entirely in the 1st District instead of breaking off some areas with significant African American populations and putting them into the 6th District.

NAACP lawyers pointed out that 80% of Black Charleston County voters are now in the 6th District. In the 2010 maps, African American voters from the county were nearly evenly split between the 6th and the 1st Districts,

U.S. District Judge Richard Gergel said during the arguments that to him it appeared that racial sorting was by design, perhaps making the newly drawn 1st District an illegal racial gerrymander, The State newspaper reported.

"If you see a turtle on top of a fencepost, you know someone put it there,” Gergel said. “This is not a coincidence.”

If the U.S. House maps are ruled illegal, the judges could order lawmakers to redraw all or parts of the congressional maps, setting a deadline and guidelines for the work.

The NAACP said it would ask that special elections be held in any districts the judges rule are unconstitutional.

James Pollard is a corps member for the Associated Press/Report for America Statehouse News Initiative. Report for America is a nonprofit national service program that places journalists in local newsrooms to report on undercovered issues.