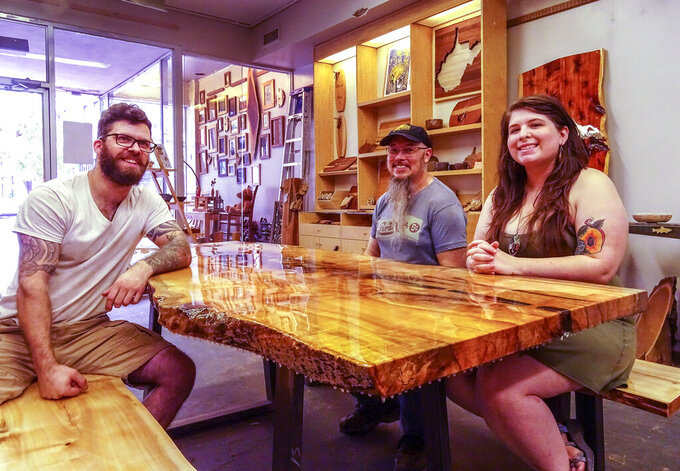 CHARLESTON, W.Va. (AP) — Part of a finger is not a terrible thing to waste, at least not to Casi Pourfarhadi.

The 32-year-old woodworker once sliced off a good chunk of his middle digit while plying his craft. Deep into making two large walnut desks, Pourfarhadi attempted to adjust a piece of the machine with the bit spinning at 12,000 revolutions per minute. Three fingers got in the bit and, well...

A decent-sized tip of his middle finger ceased to be, as did a smaller segment of his index digit. Not to worry, though. “Everything was in the vicinity,” the bearded, tattooed man said, referring to his detached, and semi-detached, finger bits.

Pourfarhadi, a calm, reasonable sort, this time went into shock. Which proved to be good, because shock meant little relative pain as he gathered up what finger fragments he could, put them on ice and called the ambulance. This all happened in March 2018 and planted the seed of a promising but oddly located business, Black Locust Woodshop, at 818 Lee St., in Charleston.

Surgeons had to give up on the middle finger, but were able to reattach the index. It still bears telltale signs of trauma, however, its top knuckle hooved up. Surgeons fixed the ring finger to its natural state.

“Those were the most beautiful desks I had ever worked on,” Pourfarhadi said. “I sacrificed my finger for it, so I’ll have to think it’s worth it. Helped us get this shop.”

When he healed, he jumped right back into the desks, sold them at a handsome price and took the profits to help pay for the space he shares with business partner Daniel Riffle, 53, of St. Albans. The two are custom woodworkers, generating most business from their website, www.blacklocustwoodshop.com.

“Creating our wares in the woodshop to the music of The Company Stores or an audio book, you will find a number of skilled artists, woodworkers and four-legged friends,” their website says. “We believe that infusing craftsmanship in the home or office is to elevate your environment with artistic brilliance and beautifully designed functionality.”

A dog named Brailey holds down the front part of the store with Kaitlin Dingess, 27, of Charleston. Dingess curates the shop front with a mix of the woodworkers’ creations and those from a host of other artisans around town. She is amused by the pair, which she attempts to harness into the land of social media marketing and other modern constructions.

“I have a window where I can see them in the back,” she said. “Sometimes, they’re dancing. They’re like lab rats I can observe.”

Riffle is married, quick with a bright smile, generally more expressive and possessing a modified “Duck Dynasty” beard. His creations often follow the principles of “modern, flowing and minimal,” while the often deep-in-thought Pourfarhadi likes to throw metal and an industrial feel into his ideas. McCartney and Lennon on Lee Street.

“At different times in my life, I’ve wanted to make woodworking a job,” Riffle said. “I did the craft shows, lugging stuff from state to state. It’s rough. So this was a great idea he had.”

Pourfarhadi’s “studio” used to be equipment set up in his dining and living rooms. “It didn’t do much for my dating scene,” he said.

This is not a tale of two longtime best buddies. The two shared space at the FestivALL Street Fair a couple of times, and did some contracting jobs together. When they weren’t working on wood, Pourfarhadi did a stint in the U.S. Marines and labored at Taylor Books. Riffle worked for a time at the South Charleston Public Library.

Still, Pourfarhadi thought he could work with his casual acquaintance. He called and put forth the proposition. It’s been two years this month. Their name came from a black locust tree planted in the sidewalk across at Hale and Lee, in view from their window.

It’s a good thing the place isn’t heavily dependent on foot traffic. There are not nearly as many feet on the street as in the past, even in the heart of Capitol Street. Black Locust’s location makes it seem as if the brain trust is trying to go undetected.

On one side is the decrepit Stone and Thomas building, complete with a tree growing out of the roof. On the other is the AT&T building, that endless fortress of bricks that houses who knows what, except workers who matriculate in and out. It’s even a fair piece to the other side of Lee Street, the Triangle complex serving as a partial island between the shop and the rest of the world.

“It doesn’t bother me that much, because we can make as much noise as we want and nobody cares,” Pourfarhadi said.

Right now, the two are busy with a big order from the Charlottesville, Virginia, area. A client ordered eight 18-inch round windows; six rectangular tables, 7 feet long by 6 feet wide; and two large interior doors. It ought to keep them busy through most of this month.

They don’t claim to be making a lot of money, only getting established. One aspect that helps is that people don’t know where to turn to for custom jobs. A respectable, knowledge-based website helps, plus a slew of five-star online reviews. Black Locust possesses both.

Custom orders come in from California, New York, sometimes overseas. They team with house staples, such as coffee and dining room tables. Custom mugs and shaving kits also are big sellers. Prices aren’t cheap, for someone on a budget. Like most quality woodworkers, much time and effort goes into each job, as opposed to pieces mass produced.

So the two will go on sawing. Hopefully, they keep their fingers out of the way.