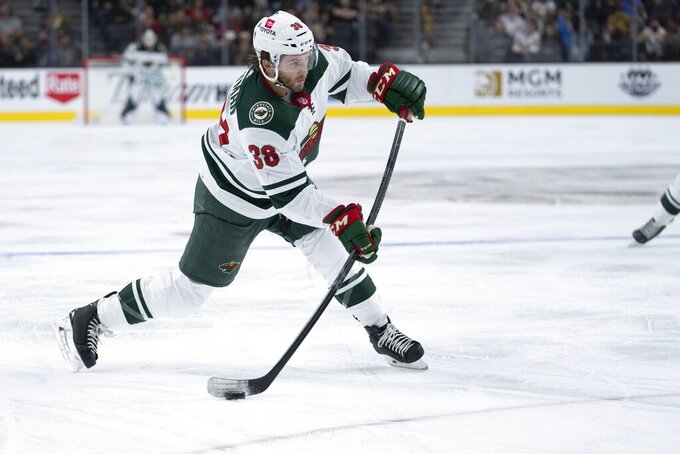 The Golden Knights improved to 7-2-0 since Oct. 26 after opening the season 1-4-0. The seven wins and 14 points in that span are tied for first in the NHL with the Los Angeles Kings.

Jonathan Marchessault also scored for the Golden Knights, and Laurent Brossoit made 24 saves.

Vegas was also 6 for 6 with its penalty kill.

Minnesota, playing the second of back-to-back nights, had its four-game win streak snapped. The Wild are tied for the Central Division lead with the St. Louis Blues, making Vegas’ win a bit more of a statement as it continues to play without three of its top forwards, Mark Stone, Max Pacioretty and Jack Eichel.

“Some of our older guys have really done a fantastic job of leading the way,” Vegas coach Peter DeBoer said. “These young kids have come in and contributed and followed and done their thing, and helped instead of hurt us, which is what we needed. But this bus has been driven by our goaltenders and our leadership.”

Minnesota had scored five goals in each of the previous four games and was held to its lowest tally since a 4-1 loss in Denver on Oct. 30.

“We didn’t have a great start, looked a little sluggish,” Wild forward Marcus Foligno said. “Just didn’t get to our game early.”

Cotter, taken in the fourth round of the 2018 draft, got things going when he took a pass in the neutral zone, zipped by Dmitry Kulikov and gave Vegas a 1-0 lead 6:08 into the game.

“I don’t think it gets much better than that,” said Cotter, who made his NHL debut on Tuesday. “I think that’s my default move, I’ve done that a few times in my career so I was comfortable in doing that. So special.”

Rondbjerg got his first roughly 10 minutes later after fending off Alex Goligoski near the Minnesota bench, breaking free and then beating Talbot with a snap shot from the slot. Rondbjerg became the 13th Danish-born NHL player to score a goal.

“I didn’t know that, but yeah, that’s cool,” said Rondbjerg, playing in just his seventh game. “Super excited to get one in. It is special. Now that I’ve been to other rinks, I really see how loud T-Mobile is. It’s an amazing atmosphere and such a fun arena to play in.”

The Wild had their best chance to tie the game with back-to-back 5-on-3 power-play opportunities in the second period.

After Vegas’ Shea Theodore was called for hooking, Nic Hague joined him in the penalty box after being whistled for delay of game, giving the Wild a two-man advantage. Then, 21 seconds after Theodore’s penalty expired, it was Alex Pietrangelo sitting next to Hague in the box for the same infraction.

Between a stellar defensive effort by veteran blueliner Brayden McNabb, negating several passing lanes, and Brossoit making a handful of saves — including one on Joel Eriksson Ek from point-blank range — the Golden Knights got what might have been the loudest roar of approval from an announced crowd of 18,267 that they’ve gotten all season.

“We’ve been fortunate enough to have a lot of comebacks here,” Spurgeon said. “The belief was there. But if you have a 5-on-3 for that long and you don’t capitalize, that hurts the team.”

Marchessault put an exclamation point on the second period when he took Reilly Smith’s slick pass through Jonas Brodin’s legs and beat Talbot with a laser of a wrist shot with seven seconds left to give Vegas a three-goal advantage.

“We worked and competed and made it tough defensively, killed some big penalties, got some timely goals from depth guys,” DeBoer said. “So it was a gutsy, gutsy effort.”

NOTES: Vegas D Alec Martinez took a skate blade to the face, left the game with 11:32 left in the first period and did not return. DeBoer said it was an “ugly, ugly cut” and didn’t have an exact stitch count but said he heard it was “over 50 stitches.” ... Marchessault, who has a point in five straight games, is one goal shy of 100 as a Golden Knight. ... The Wild dropped to 5-3-0 on the road this season, but are tied for first in the NHL in road wins. ... Former Golden Knight Jon Merrill, who assisted on Hartman’s goal, received a tribute video in his first regular-season return to T-Mobile Arena.