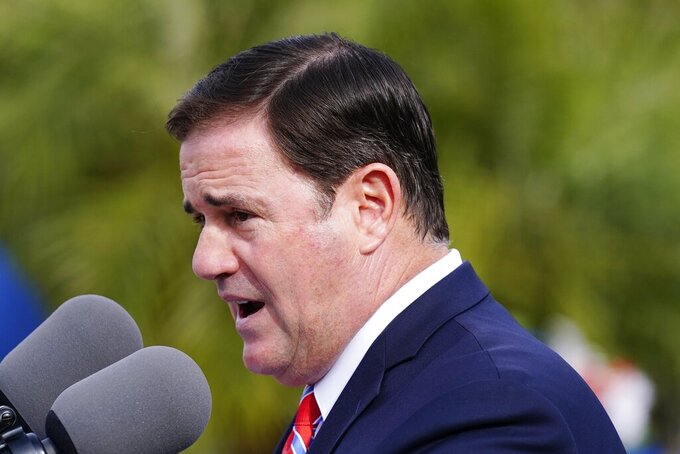 Ross D. Franklin, ASSOCIATED PRESS
FILE - Arizona Republican Gov. Doug Ducey speaks at a ceremony on Dec. 7, 2021, in Phoenix. Two more bills restricting responses to the coronavirus pandemic are heading to Ducey's desk, including one that would impact the ability of future state leaders to respond to another airborne-spreading disease and a second blocking the state from ever requiring schoolchildren to get a COVID-19 vaccine. (AP Photo/Ross D. Franklin, File)

PHOENIX (AP) — Arizona Gov. Doug Ducey is in Israel for five days of talks with political and business leaders of the Middle Eastern country.

Ducey arrived in Israel on Sunday morning, accompanied by the heads of the Arizona Commerce Authority and the Arizona Chamber of Commerce and Industry.

Ducey spokesperson C.J. Karamargin said the Republican governor's meetings will focus on trade, water and border security. Ducey has worked over his seven years in office to boost economic ties with Israel, which has a similar arid climate and water and security issues.

Ducey will pay a Memorial Day visit to Israel's 9/11 memorial in Jerusalem, meet with the city's mayor and visit some historic sites.

It is Ducey's third trip to Israel since he took office in 2015. He was the first Arizona governor to go there when he led an 8-day official trade mission during his first year as governor. He attended an international conference on water technology and met with business and government officials.

In 2019, he and his family traveled there for a combined business trip and family holiday vacation. He toured a commerce authority trade office that opened in Tel Aviv earlier that year.

Ducey has touted Israel’s water desalination technology as a way to augment Arizona’s supplies, which are endangered by long-term drought and climate change. He wants the state Legislature to approve a $1 billion investment for boosting the state's water supply this year. Key to that plan is a desalination plant that could cost more than five times that amount.

Ducey has not provided any details of plans for the plant, which would likely be located in Mexico and draw water from the Gulf of California.

Commerce authority president and CEO Sandra Watson and Danny Seiden, a former Ducey staffer who now leads the statewide Chamber of Commerce business group, are traveling with the governor.