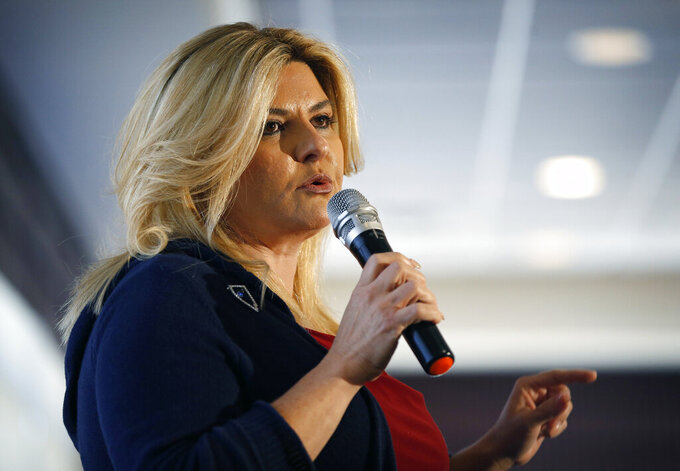 John Locher, ASSOCIATED PRESS
FILE - In this April 26, 2016, file photo, Michele Fiore participates in a Republican debate in Henderson, Nev. Fiore, a Las Vegas City Councilwoman who rose to national prominence for her support of self-styled anti-government militiamen who clashed with federal law enforcement in multiple armed standoffs last decade, is running for governor of Nevada. She announced her plans to run at a news conference in Las Vegas on Tuesday, Oct. 19, 2021. (AP Photo/John Locher, File)

CARSON CITY, Nev. (AP) — A Las Vegas city councilwoman who gained national attention for her support of militiamen who clashed with federal law officers during armed standoffs last decade said Tuesday she is running for governor of Nevada.

Republican Michele Fiore announced her plan to run at a news conference at the Italian-American club in Las Vegas, where she talked about her political battles and said she'd bring the same fervor to fighting vaccine mandates, terrorist organizations and election fraud.

Fiore, a New York City native, served in Nevada's Assembly from 2012 to 2016, during which she opposed tax increases, supported gun rights and spearheaded a controversial proposal that would have dramatically curbed federal power to manage public lands and waters in Nevada.

Her ties to rancher Cliven Bundy and his family put her in a media spotlight during armed standoffs between self-described citizen militia members and federal law enforcement in Bunkerville, Nevada, in 2014 and Malheur, Oregon, in 2016.

She gained additional attention during a 2016 run for Congress for sending a Christmas card showing her and her family with a variety of firearms. She was elected to the City Council in 2017.

The video shows Fiore walking through the desert in a red dress with a handgun strapped to her waist that she unholsters to fire at bottles labeled “vaccine mandates,” “critical race theory” and “voter fraud.”

Fiore's entrance adds her to a list of Republican gubernatorial candidates in Nevada and other purple states who are assailing state-level executive actions that Democratic incumbents running for reelection have enacted. In Nevada, candidates trying to unseat Democratic Gov. Steve Sisolak have blamed the state's sluggish economic recovery on mandates and restrictions he put in place.

“Michele Fiore’s entrance will only make this primary more expensive, bruising, and as far-right as it can get. Whoever makes it out alive will spend the general election trying to redefine themselves and refill their bank account," said Mallory Payne, a spokesperson for Nevada Democratic Victory, a group working to reelect Sisolak.

Fiore’s announcement comes amid reports of an FBI probe into Fiore’s campaign finance records and tales of physical confrontations with a former political ally at City Hall. The Las Vegas Review-Journal has reported that agents have subpoenaed records and searched Fiore’s home in northwest Las Vegas.

She will likely draw support from conservative Republicans who see her as a champion for gun rights and an advocate for former President Donald Trump. Her entrance may shift debates to the right in a race in which former U.S. Sen. Dean Heller, once known as a moderate, has refused to explicitly say Joe Biden won the 2020 presidential election.

On Tuesday, Fiore, who was elected Nevada's Republican National committeewoman in 2020, said she supported efforts to audit the state's 2020 election result. Gilbert, who was outside the U.S. Capitol when it was violently stormed on Jan. 6 has also called for additional election review.

Fiore said she planned approach the campaign similar to her previous political battles and wouldn’t work with Democrats if it meant compromising her positions.

"That isn’t me. You’ll never hear me do that. If you want that, then vote for one of my primary opponents,” Fiore said.

This version corrects the spelling of Fiore's first name.