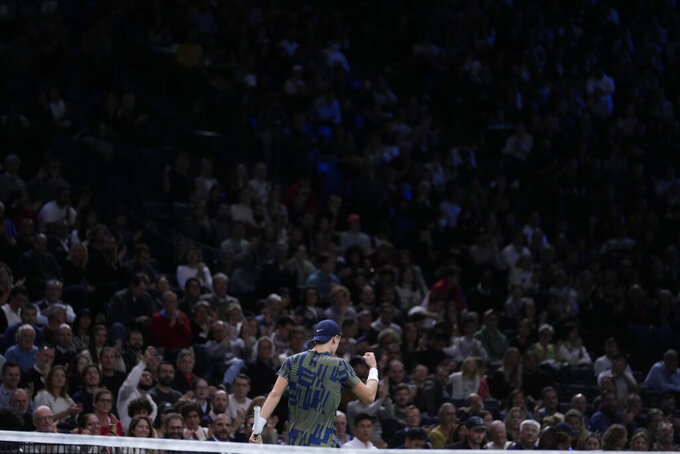 PARIS (AP) — Unseeded Danish teenager Holger Rune staged a stunning comeback to secure the biggest victory of his career by beating Novak Djokovic 3-6, 6-3, 7-5 in the final of the Paris Masters on Sunday.

The 19-year-old Rune, who is a friend and former junior doubles partner of top-ranked Carlos Alcaraz, saved six break points when serving for the match.

Djokovic saved one match point when Rune double-faulted. But the audacious Dane took his chance on the next, whipping a forehand into Djokovic's feet that he could only volley back into the net.

“It means everything to me, a perfect way to finish the week,” Rune said. “It’s a privilege to share the court with Novak.”

Rune, who is the same age as U.S. Open champion Alcaraz, slid on his back in disbelief after winning his first Masters title. He got back up and looked close to tears as he sank his head in his hands, then raised both fists in the air to celebrate a remarkable week where he beat five top 10-ranked opponents in a row. That run only came about after he saved three match points in the first round against three-time major winner Stan Wawrinka.

Djokovic, who missed out on a record-extending seventh Paris Masters title, hugged him warmly at the net.

“I feel exhausted. It was an incredible tournament,” Rune said. “I have so much respect for what (Djokovic) has done,” Rune said. “I'm so proud of myself, it hasn't sunk in yet. The last game was one of the most stressful of my tennis life.”

His achievement is even

Those victories followed a thrilling first-round win in which he saved three match points against Stan Wawrinka,

Djokovic looked set to cruise to a 91st career title.

The sixth-seeded Serb wrapped up the first set with a love hold on serve, then had Rune 0-40 down in the opening service game of the second set.

Rune saved three break points and waved his arms to get the crowd going. They responded with chants of “Holger, Holger.”

Djokovic offered his first break point at 30-40 in the next game and was broken when he hit a loose forehand wide. Rune took control and won the second set with a love hold of his own.

But Rune found himself 0-40 down once again, this time in the fourth game of the decider. He saved one break point with an ace but double-faulted on his next serve as Djokovic broke for a 3-1 lead, again looking in command.

The match then turned when Djokovic missed a routine smash at the net on game point for a 4-1 lead, with Rune showing incredible reflexes to volley it back for a winner.

This let Rune back in the contest and he broke back with a fine cross-court forehand. Djokovic then had some massage treatment on his left thigh at the changeover and began to get agitated, remonstrating with his team.

A tired-looking Djokovic chopped a backhand long in the 11th game to trail 30-40, and Rune broke him again to serve for the match at 6-5.

It wasn't over. Rarely is with Djokovic.

He drew on his experience as a 21-time Grand Slam singles champion to pressure Rune in a 12th game lasting nearly 20 minutes, but Rune held his nerve for his third title of the year and of his blossoming career.

Rune will enter the top 10 on Monday, where he joins Alcaraz who is the youngest man to lead the ATP computerized rankings since they began in 1973.