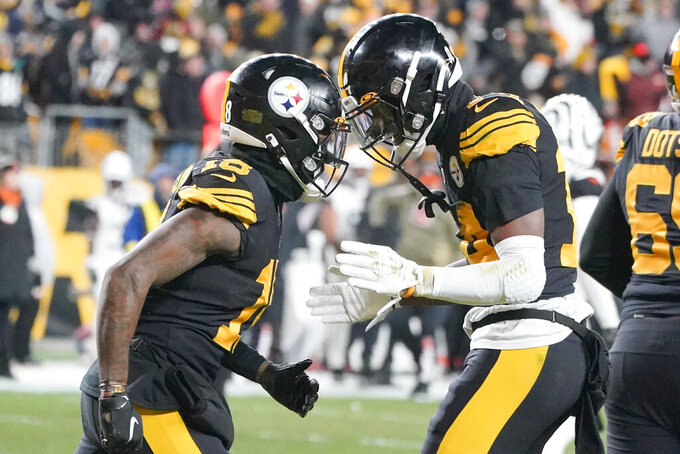 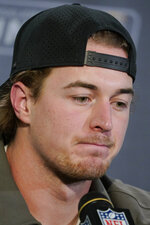 PITTSBURGH (AP) — Kenny Pickett and the Pittsburgh Steelers' offense found the production they needed for one half against the Cincinnati Bengals.

Then came the second half.

Inconsistency and ineffectiveness plagued Pittsburgh and Joe Burrow and the Bengals rallied from an early deficit and pulled away for a 37-30 victory Sunday.

Pittsburgh (3-7) has the second-lowest scoring offense in the NFL. But Pickett and the Steelers found life following a home win against New Orleans last week and the offense carried that momentum into the first half against the Bengals on Sunday.

The Steelers were looking to beat the Bengals a second time this season after Pittsburgh pulled off a 23-20 season-opening overtime win in Cincinnati. But the Steelers sputtered offensively in the second half and lost for the seventh time in nine games.

“I’m extremely competitive and I hate to lose,” Pickett said. “It doesn’t feel good sitting up here after a loss, that’s for sure. We have to get things cleaned up and get back on track this next week.”

Pickett didn’t throw an interception for the second straight game as the 20th overall pick of the draft in April passed for 265 yards and a touchdown. But the offense managed just 67 yards and two first downs in the second half until a late touchdown drive. A failed onside kick in the final minute sealed the Steelers’ loss.

“We just weren’t able to get into the type of rhythm that we needed in an effort to control the game in the manner in which we did in the first half,” Steelers coach Mike Tomlin said.

Pittsburgh scored at least 23 points in regulation — and more than 14 points in a half — for the first time this season, as the Steelers scored on four of five first-half possessions.

Before Sunday, the Steelers didn’t have a touchdown longer than 8 yards. But running back Najee Harris had a 19-yard run and wide receiver George Pickens a 24-yard reception Sunday as Pittsburgh held a 23-20 halftime lead.

“There’s a lot of good stuff we put on film,” Harris said. “Obviously, we scored points, so we’re building. There’s good, but it’s not good enough.”

The Steelers offense opened the second half with three straight three-and-outs — and Burrow and the Bengals capitalized by taking a 24-20 lead.

The offense had a significant opportunity and started at the Bengals 21-yard line following T.J. Watt’s highlight-reel interception of Burrow at the line of scrimmage. But the Steelers settled for Matthew Wright’s 34-yard field goal to cut the deficit to one point.

Evan McPherson’s 54-yarder made it 27-23 as Pittsburgh remained within striking distance. Pickett and the offense moved to the Bengals 39 following a 33-yard pass to Pickens. But a failed flea flicker, a negative run and a sack forced a punt.

On the ensuing drive, still trailing 27-23, the Steelers started at midfield and advanced to the Bengals 34, but back-to-back penalties pushed Pittsburgh back to midfield and eventually drew another punt.

“I thought the significant component of the game was the field positioning in the second half,” Tomlin said. “We had a short field on offense and weren’t able to get points. When you’re in a battle like that and you have the short field, you have to get points.”

The Bengals had a long field after the punt. Burrow and the Bengals were able to put the game out of reach about five minutes later with an eight-play, 93-yard drive, while Pickett and the Steelers were left to regroup after coming up short in the second half.

“The penalties and not taking advantage of the shorter field are things that stick out immediately,” Pickett said. “Our defense gave us a chance to win the game and we didn’t come through in the second half.

“We have to get it fixed and have two strong halves in order to beat a team like that.”