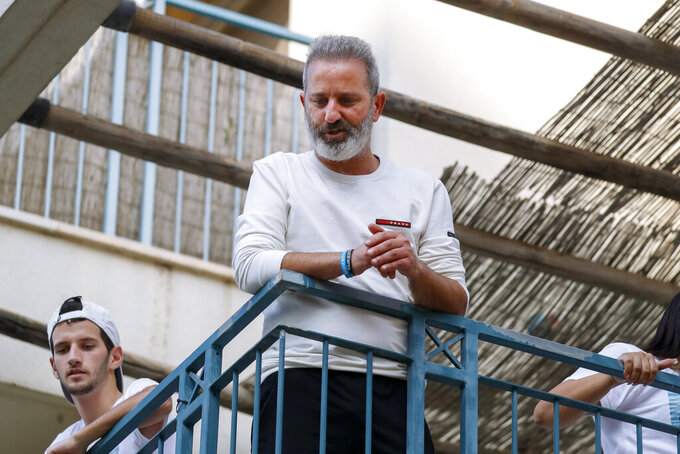 Ariel Schalit, ASSOCIATED PRESS
Israeli national Mordi Oknin stands at the balcony hours after he and his wife Natalie arrive to their home in Modiin, Israel, Thursday, Nov. 18, 2021. The couple has been released by Turkey after being arrested for espionage last week for taking photographs of the Turkish president's residence in Istanbul. (AP Photo/Ariel Schalit)

MODIIN, Israel (AP) — An Israeli couple held by Turkey on suspicion of espionage returned home on Thursday after they were released from a weeklong detention.

Mordi and Natalie Oknin arrived in central Israel where they were greeted by family and a crowd of reporters. From her apartment's balcony, Natalie thanked all those involved in securing their release.

There was no official statement from Turkish officials on the release. Turkey’s private DHA news agency reported that a Turkish citizen who was arrested along with the couple was also released.

A flurry of high-level phone calls followed, a rare connection between the leaders with relations between their countries at a low in recent years. Israeli Prime Minister Naftali Bennett said in a statement that he thanked Turkish President Recep Tayyip Erdogan “for his personal involvement” in the matter.

Earlier, Erdogan and Israeli President Isaac Herzog spoke and according to both of their offices, Erdogan emphasized the importance of ties between the countries. They both highlighted the need to focus on regional peace. The leaders agreed to remain in touch, Herzog's office said.

Once robust regional allies, relations between Israel and Turkey have been at a nadir throughout Erdogan’s rule, during which the Turkish leader has been an outspoken critic of Israel’s policies toward the Palestinians. The couple’s arrest threatened to further weaken the relationship, but Israeli officials said the incident showed that the countries’ diplomatic channels remained intact.

The Oknins were arrested for espionage last week after taking photographs of Erdogan's residence in Istanbul, Turkey’s official news agency reported at the time. Anadolu Agency said a Turkish national was also arrested. Police detained the three after a tip-off from an employee working in a radio and television tower on the Asian side of Istanbul.

The employee claimed the couple had been taking photographs of Erdogan’s nearby home from the tower’s restaurant. They were awaiting trial for “political and military espionage” by an Istanbul court.

Israeli Foreign Minister Yair Lapid denied after their detention that the couple worked for an Israeli agency.