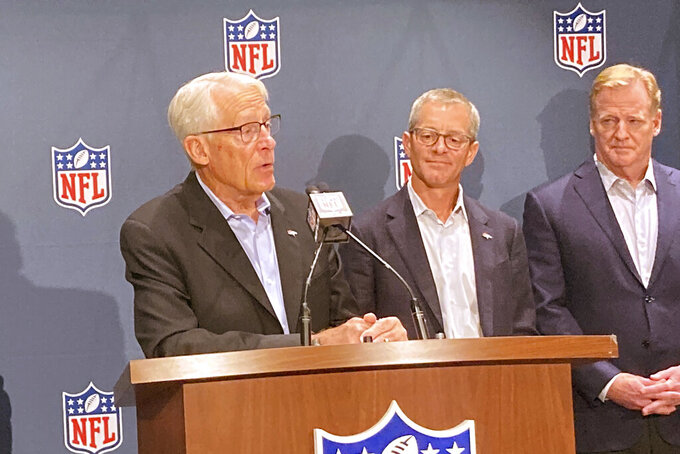 Dave Campbell, ASSOCIATED PRESS
Rob Walton speaks at the NFL owners meeting in Bloomington, Minn., Tuesday, Aug. 9, 2022, as son-in-law Greg Penner, center, and NFL commissioner Roger Goodell look on, Tuesday, Aug. 9, 2022. The record $4.65 billion sale of the Denver Broncos to Walmart heir Rob Walton and his daughter and son-in-law was unanimously approved Tuesday by NFL owners, the expected final step in the transfer from the family of the late Pat Bowlen.

BLOOMINGTON, Minn. (AP) — The record $4.65 billion sale of the Denver Broncos to Walmart heir Rob Walton and his daughter and son-in-law was unanimously approved Tuesday by NFL owners, the expected final step in the transfer from the family of the late Pat Bowlen.

The vote was taken at a league meeting at a hotel in Minnesota, where Walton, his daughter, Carrie Walton Penner, and her husband, Greg Penner, were introduced by NFL Commissioner Roger Goodell. With an estimated worth of $60 billion, the 77-year-old Walton — the eldest son of Walmart founder Sam Walton — becomes the wealthiest owner in the league. Rob Walton served as chairman of the retail giant from 1992-2015.

“I’m appreciative to see such a good group coming to own the Broncos. I think it speaks to the direction that the organization is going in,” right tackle Calvin Anderson said after practice in Englewood, Colorado. “Just like the Avs winning the Stanley Cup, it’s a challenge to us to rise to the occasion."

The Walton-Penner group paid the highest price in history for a sports franchise anywhere in the world. The three limited partners are Formula One world champion Lewis Hamilton, Starbucks board chair Mellody Hobson and former U.S. Secretary of State Condoleezza Rice.

All three investors are Black, satisfying a goal to bring more racial diversity into ownership groups, front offices and coaching staffs. With more than one-third of the ownership share belonging to either women or minorities, the Broncos will have by far the most diverse group in the NFL.

The Pat Bowlen Trust ran the franchise after Bowlen stepped back from day-to-day duties in 2014 because of Alzheimer’s disease. He died in 2019, one month before his induction into the Pro Football Hall of Fame. Penner said informal discussions with Bowlen regarding a sale took place as far back as about 10 years ago, right before his health began to decline. This was the only sports franchise, Walton said, the family would have considered buying.

Bowlen wanted one of his children to take over the team and Brittany Bowlen, now 32, was the trustees' selected successor. Not all of her siblings supported that choice, so the club was put up for sale. Brittany Bowlen stepped down as the team’s vice president of strategy after the Walton-Penner group was awarded the franchise with their winning bid.

Only one other NFL club has been sold in the past 10 years: the Carolina Panthers from Jerry Richardson to David Tepper for what was then a record $2.2 billion.

The Broncos are now the first team since the 2008 Miami Dolphins to change primary owners, head coaches and starting quarterbacks in one offseason.

"When it comes to the ownership, I am so excited to get to know them, to meet them, and move forward. I know there has been an amazing history here, and you can learn a lot from history — the good, the bad, and everything,” new coach Nathaniel Hackett said. “Right now, it is just about putting ourselves in a position to win some football games.”

The Broncos also have a general manager, George Paton, with one year under his belt.

“George came up with an outstanding coach, I think, in Nathaniel. They’ll have to perform, but we think we’ve got the pieces to really get together and have a great season,” Walton said.

The first major decision under the Walton group's watch will be a contract extension for new quarterback Russell Wilson, who arrived via trade with the Seattle Seahawks in March. The new deal for the nine-time Pro Bowl pick is expected to be in the range of $260 million and five years.

Another pressing issue: Empower Field at Mile High. The stadium is only 21 years old, but it lacks the frills and revenue-producing features of new venues such as SoFi Stadium in Los Angeles and Allegiant Stadium in Las Vegas, the homes of the AFC West rival Chargers and Raiders, respectively.

“It would be premature to start talking about a new stadium. I’ll say that Empower Field at Mile High is a world-class facility,” Penner said, praising the club's relationship with the public agency that oversees the venue and noting the lease that doesn't expire until 2031. “We’ll evaluate all of our options and really dig in and try to understand the situation before making a decision.”

“It’s a credit to owners that aren’t alive, owners that are alive, and the Commissioner, that we’re able to generate a price increase and have that sort of equity value in what we do,” Indianapolis Colts owner Jim Irsay said. “It’s taken a lot of hard work and a lot of risk.”

“They’ll do a wonderful job,” Kroenke said. “Having people that you know you can count on who are forward-looking and are progressive and want to invest in the facilities, the communities they’re in, that’s a big deal.”

Joe Ellis, who served as team president for the past 11 seasons, has stepped down from his role and will serve as an advisor in 2022 at the request of the new owners.

“Pat Bowlen created an incredible legacy at the Broncos, and he leaves big shoes to fill,” Walton Penner said. “We look forward to continuing to build on that legacy.”

The arrival of the Walton-Penner group gave the NFL a moment to attempt to deflect some attention off two ownership-related black eyes that developed for the league earlier this year — the ongoing workplace culture investigations surrounding Washington Commanders owner Daniel Snyder and the tampering and tanking case around Miami Dolphins owner Stephen Ross.

“The integrity of the game’s critically important. I think the findings were very clear on the tampering charges,” Goodell said. “While tanking clearly did not happen here, I think we all have to understand that our words, and our actions have implications for being interpreted.”