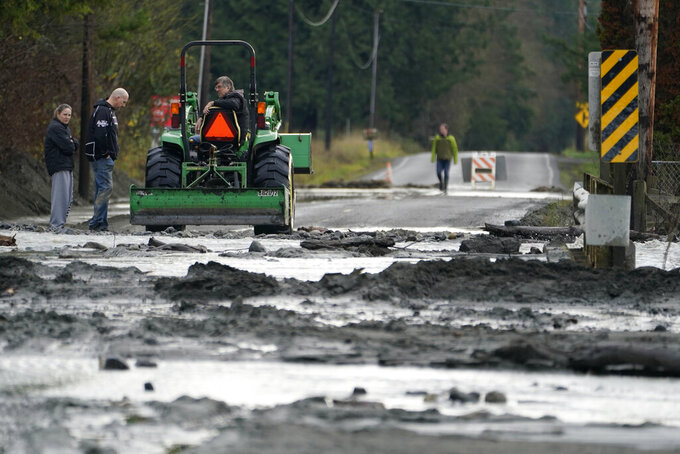 Elaine Thompson, ASSOCIATED PRESS
A tractor operator talks with people standing near a mud- and debris-covered road near Everson, Wash., Monday, Nov. 29, 2021. Localized flooding was expected Monday in Washington state from another in a series of rainstorms, but conditions do not appear to be as severe as when extreme weather hit the region earlier in November. (AP Photo/Elaine Thompson)

Forecasters said 2 inches (5 centimeters) of rain could fall Tuesday in Whatcom County just south of the Canadian border and up to 4 inches (10 centimeters) was possible in surrounding mountains.

Members of the Washington National Guard were helping with sandbagging, supply transport and were staffing road closure points to prevent drivers from bypassing them, the Whatcom County Sheriff's Office said.

“Excessive runoff may result in flooding of rivers, creeks, streams and other low-lying and flood-prone locations,” the National Weather Service said. "Any flooding that does occur will likely be minor."

Hundreds of people earlier this month were evacuated from those towns amid severe flooding from days of rain that caused an estimated $50 million in damage to Whatcom County.

People in the small communities of Sumas and Everson in northwest Washington were last asked to temporarily evacuate on Saturday night.

Water levels continued to drop Tuesday morning in Sumas, but heavy rains in the afternoon caused some water levels to rise, city officials said in a Facebook post.

“So, please be careful as you travel, as water levels continue to rise in certain areas around town throughout the rest of today. Life safety continues to be our main priority,” the post said.

Many local roads in the area and around the city of Bellingham were closed Sunday and Monday because of water over the roadway and some schools in the region closed.

A landslide Sunday blocked part of northbound Interstate 5 south of Bellingham and officials said an increased threat of landslides will remain in the region for several days.

A new record was set as of Tuesday for the wettest early September-November period in the Seattle area with more than 19 inches (48 centimeters) of rain recorded at Seattle-Tacoma International Airport between Sept. 1 and Nov. 28, according to the National Weather Service in Seattle.

The second wettest September-November period in Seattle was recorded in 2006, with 18.61 inches (47 centimeters) of rain, the National Weather Service said.