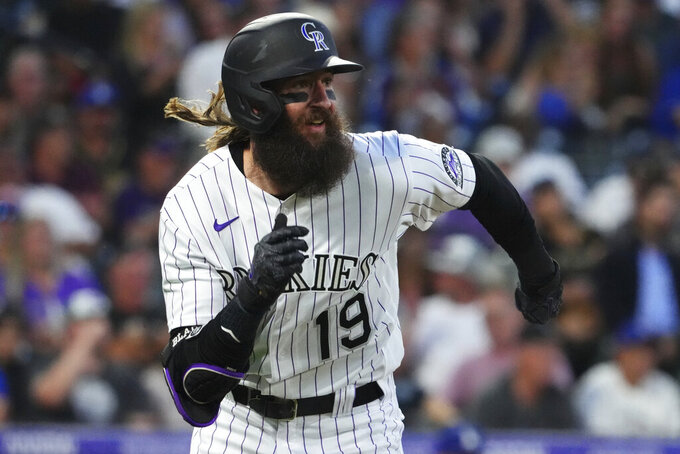 DENVER (AP) — Randall Grichuk and Elias Diaz homered and the Colorado Rockies continued their Coors Field mastery of Clayton Kershaw with a 7-4 victory over the Los Angeles Dodgers on Tuesday night.

The Rockies roughed up Kershaw for six runs and nine hits in four innings, his shortest outing in Colorado since he gave up five runs in three innings in his first career start there on July 22, 2008.

“I thought we did a good job of recognizing balls and strikes — being ready to hit but laying off the borderline pitches,” Colorado manager Bud Black said. “Aggressive on strikes, taking balls. That’s a good approach.”

Charlie Blackmon had four hits and scored twice and Brandon Rodgers had two hits and two RBIs as the Rockies clinched their second series victory over the Dodgers this season, the first time they have won consecutive home series against the Dodgers since 2016.

“I thought we did a good job from a team offense perspective,” said Blackmon, who is 21 for 69 against Kershaw since their first meetings in 2011. “We worked some walks. For the most part laid off some of his really good pitches to get ourselves into better counts.

“He throws a lot of strikes. He’s aggressive. He’s really good. He’s struck me out a lot. Sometimes it goes the other way.”

Kershaw (5-2) struck out four and walked four after issuing only seven walks in his previous eight starts this season. He is 11-7 with a 4.81 ERA in 25 career starts at Coors Field, his highest ERA at any venue.

“I’m going to go with, just not overthink it and just say I sucked today,” Kershaw said. “Thankfully, they’ll let me do it again in five days. But not a lot of positives today for sure.

“I don’t really think about Coors Field. I don’t think I would have pitched well anywhere today.”

Hanser Alberto, Max Muncy and Trea Turner hit bases-empty homers for the Dodgers, who had won five of six entering the series.

“The offense was doing their thing, kind of allowing me to find my groove and get to it,” Freeland said.

“You can’t take Kershaw lightly. He’s a Hall of Fame pitcher. He’s a guy you have to get on early and take his confidence and take wind out of his sails, and our offense did a really good job of that tonight.”

Freddie Freeman had two hits, and he singled, stole second and scored on Justin Turner’s single for a quick 1-0 lead in the first. Alberto’s second homer of the season made it 2-1 in the second inning.

Grichuk’s homer started a three-run rally in the Rockies’ second that included two walks, Blackmon’s RBI single and Rodgers’ two-out, RBI single with the bases loaded that short-hopped Kershaw’s right foot as he finished his delivery and bounced free.

Diaz homered in the third, and Blackmon singled and scored in the fourth as the Rockies scored in every inning off Kershaw.

“Sometimes this park can be more offensive,” said Blackmon, who had first-pitch singles in his three at-bats against Kershaw. “The Rockies are more comfortable playing at home. I think that’s probably part of it.”

Muncy’s solo homer in the sixth broke an 0 for 14 skid. He has 20 homers in 62 games against the Rockies.

Turner homered with two out in the ninth.

“I know there’s some people who think the NL East is the best, with the Mets and the Braves, and the Phillies had a little run here lately and the Marlins have some good pitching,” Black said. “But overall I think this division is the best division in baseball.”

Freeman didn't dispute reports Tuesday that he is seeking to separate from Excel Sports Management because of the way his free agent negotiations were handled in the offseason, when he left Atlanta for a six-year, $162 million contract with the Dodgers.

“It’s time to move on and focus on winning championships with the Dodgers, and that’s what I’m going to do,” Freeman told reporters.

Freeman was welcomed as a returning hero and was moved to tears during the Dodgers’ three-game series in Atlanta last weekend, where he received his 2021 World Series ring.

“Last weekend in Atlanta was a very emotional time for me and my family,” Freeman said in a statement. “I am working through some issues with my longtime agents at Excel. My representation remains a fluid situation and I will update if needed.”

The Rockies will honor the Stanley Cup champion Colorado Avalanche in pregame ceremonies Wednesday. The Cup will be present, and a member of the Avalanche will throw out the ceremonial first pitch.

Dodgers: OF Zach McKinstry (neck stiffness) was placed on the IL Tuesday and 1B/DH Jake Lamb was purchased from Triple-A Oklahoma City to fill the roster. Lamb was hitting .290 with 15 homers and 50 RBIs at Oklahoma City after signing a minor league deal with the Dodgers on March 18. … LHP Andrew Heaney (shoulder) is expected to miss at least two more starts, manager Dave Roberts said. … OF Mookie Betts (fractured rib) was to swing a bat Tuesday. “I still don’t know a time of return, but it’s positive,” Roberts said. … OF Cody Bellinger and C Will Smith were given the day off.

Marquez is 2-1 with a 2.89 ERA in 12 career starts against the Dodgers. He enters after his longest and most successful outing of the season, when he gave up three hits in 7 2/3 scoreless innings of a 1-0 victory at Minnesota on Tuesday.