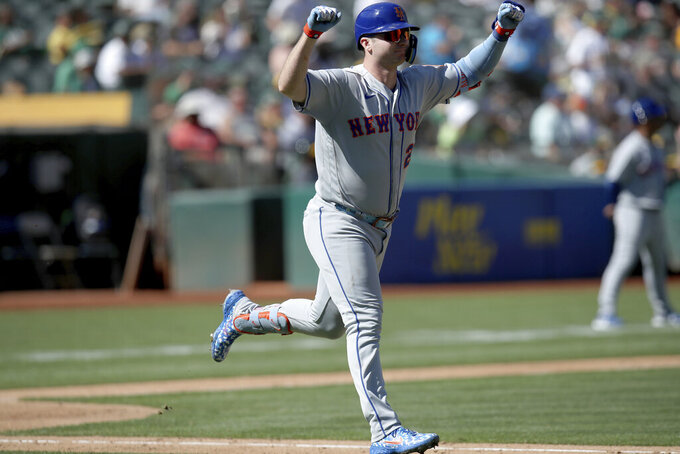 The Mets remained 1 1/2 games ahead of Atlanta. New York has won eight of 10, and plays the Braves on the road next weekend in a three-game series.

Alonso had four hits, including his 39th home run. He homered for the second straight day.

“It’s a huge honor,” Alonso said. “I wouldn’t be able to be in this position without my teammates.”

Alonso hit a two-run homer in the fourth. He had a three-run double during a five-run eighth. The Mets finished with 19 hits.

“He’s been doing things like that all year,” Buck Showalter said. “”It’s been an honor to have a good seat to watch him.

Scherzer (11-4) excelled a day after co-ace Jacob deGrom floundered. Scherzer allowed one run and four hits, striking out seven with one walk.

This was Scherzer's second appearance since exiting his start on Sept. 3 with fatigue on his left side. In his last start, the three-time Cy Young Award winner was pulled after six perfect innings and 68 pitches against Milwaukee.

“I feel pretty good about it,” Scherzer said. “I was able to get up to 90 pitches today. ... I am in a good spot. Hopefully next weekend when I get the ball I can get to 100 pitches. That would be a good number to hit.”

DeGrom allowed five runs and four walks the previous day in a 10-4 loss, the worst start for the two-time NL Cy Young Award winner since 2019.

New York improved to 18-4 in rubber match games, the most for the club since 1999. The last team to win 17 such games was the 2012 Texas Rangers. The last National League team was the 2009 Dodgers.

Tyler Naquin singled home Alonso in Mets second. Eduardo Escobar hit a two-run double the following inning off JP Sears (6-3) to increase the lead. Escobar hit a grand slam in the series-opener and has 19 RBIs in September.

The Mets tagged Sears for eight hits and six earned runs in 3 2/3 innings. The rookie has lost three of his last four decisions since starting 5-0 and was taken out after giving up a two-run double to Francisco Lindor.

Seth Brown hit his 25th home run for the A's. Connor Capel hit a three-run drive in the ninth.

The A’s set a franchise record with their 51st loss of the season at the Coliseum and have three home games remaining. Oakland lost 50 games at home in 1979.

The A’s honored Stephen Vogt prior to the game as the recipient of the club’s Catfish Hunter Award. The award is presented annually to the A’s player whose play on the field and conduct in the clubhouse best exemplifies the competitive, inspirational and courageous spirt of the Hall of Fame pitcher. Vogt announced earlier this week he would retire at the end of the season.

Mets: 2B Luis Guillome wasn’t in the lineup Sunday after being removed in the fourth inning of Saturday’s game after a knot in his arm developed. ... CF Brandon Nimmo returned to the lineup after he was held out of the lineup the previous day as a precaution after he returned Friday from a left quadriceps injury. … OF Starling Marte underwent a CT scan on his fractured middle finger that showed improved healing. He will continue baseball activities as tolerated. Showalter said after the game he “wouldn't rule out” Marte for next weekend.

Mets: After an off day Monday, New York will send Carlos Carrasco to the mound opposite Pablo Lopez (9-10, 3.88) to open a two-game home series against Miami.

Athletics: Oakland also has an off day Monday. James Kaprielian (4-9, 4.43) will face Patrick Sandoval (6-9, 3.01) as the Athletics start a three-game road series against the Angles.