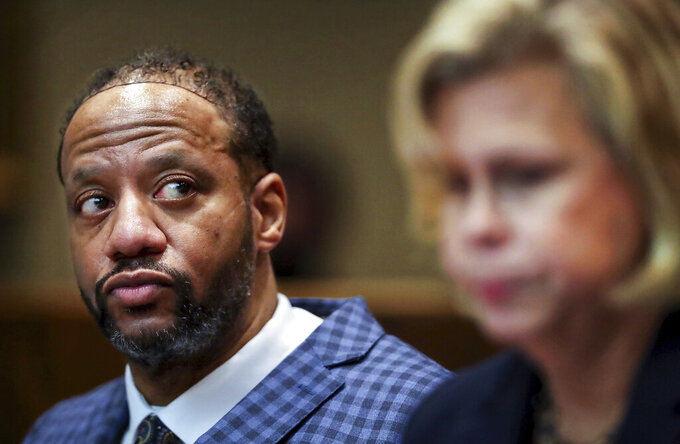 MEMPHIS, Tenn. (AP) — Moments before a Tennessee judge freed him from death row, Pervis Payne walked into a courtroom, hugged his lawyer and wept.

Payne, who was sentenced to death in the 1987 killings of a mother and daughter, held attorney Kelley Henry tightly and thanked her for arguing that he is intellectually disabled and cannot be executed under a relatively new Tennessee law.

“He just hugged me and just said ‘thank you,’ over and over and over again,” Henry told reporters after a hearing Tuesday in a Memphis courtroom. “I told him it was alright, 'I got you.’”

Shelby County Criminal Court Judge Paula Skahan signed an order vacating Payne's two death sentences handed down more than 30 years ago. Payne was convicted on murder charges in the stabbing deaths of Charisse Christopher and her 2-year-old daughter, Lacie Jo, in the Memphis suburb of Millington. Christopher’s son, Nicholas, who was 3 at the time, also was stabbed but survived.

The judge took action after Shelby County district attorney Amy Weirich announced Friday that the state will no longer pursue its execution plans after an expert hired by prosecutors “could not say that Payne’s intellectual functioning is outside the range for intellectual disability."

Payne's lawyers had filed a petition claiming Payne is intellectually disabled and brought in their own expert to examine him.

“The Petition is supported by two expert opinions concluding that Petitioner is intellectually disabled pursuant to Tennessee law,” the judge wrote in her order.

Payne, who is Black, has always maintained his innocence. He told police he was at Christopher’s apartment building to meet his girlfriend when he heard the victims, who were white, and tried to help them. He said he panicked when he saw a white policeman and ran away.

The case has drawn national attention from anti-death-penalty activists and includes the involvement of the Innocence Project, which argues for the use of DNA testing in cases claiming wrongful conviction. DNA tests failed to exonerate Payne.

Weirich, the district attorney, has said the evidence overwhelmingly points to Payne as the killer and her office initially contested the intellectual disability claims. A knife that was used as the murder weapon, a washcloth and other bloody items were found at the scene.

“While the evidence of Payne’s guilt has never changed or weakened, the laws regarding alleged intellectual disability as it related to the death penalty have changed,” Weirich told reporters Friday.

Executions of the mentally disabled were ruled unconstitutional in 2002, when the U.S. Supreme Court found they violate the Eighth Amendment’s ban on cruel and unusual punishment.

But until Republican Gov. Bill Lee signed a bill this summer making Tennessee’s law retroactive in prohibiting the execution of the intellectually disabled, Tennessee had no mechanism for an inmate to reopen a case to press an intellectual disability claim.

“The law was critical, because, for nearly a decade, the state has hid behind procedural obstacles, and the Legislature wiped those obstacles away,” Henry said.

Payne had been scheduled to be put to death last December, but the execution was delayed after the governor granted him a rare, temporary reprieve because of the COVID-19 pandemic. The reprieve expired in April, but the state Supreme Court had not set a new execution date yet.

Henry and prosecutor Steve Jones are expected to present arguments in court Dec. 13 concerning the issue of consecutive versus concurrent sentences. Henry said she continues to look for evidence that could exonerate Payne.

Payne also has received the support of clergy from the Church of God in Christ, and his family, including his elderly father Carl Payne and his sister, Rolanda Holman.

Holman said she remembers a judge sentencing her brother to death by electrocution more than three decades ago, and the judge telling Pervis Payne “may God have mercy on his soul.”

“Thirty-four years later, God did have mercy on his soul,” Holman said.