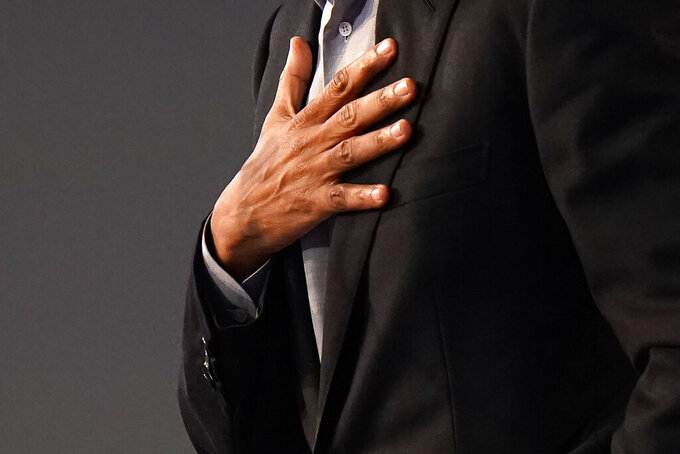 Alberto Pezzali, ASSOCIATED PRESS
Former U.S. President Barack Obama gestures as he speaks during the COP26 U.N. Climate Summit in Glasgow, Scotland, Monday, Nov. 8, 2021. The U.N. climate summit in Glasgow is entering it's second week as leaders from around the world, are gathering in Scotland's biggest city, to lay out their vision for addressing the common challenge of global warming. (AP Photo/Alberto Pezzali)

GLASGOW, Scotland (AP) — The Latest on the COP26 climate talks in Glasgow.

GLASGOW, Scotland — The European Union’s climate chief said Monday that U.N. talks in Glasgow must focus on ensuring the headline goal of the Paris Agreement can be met.

One of the issues that negotiators from almost 200 countries have been haggling over at the U.N. climate talks is whether to explicitly mention the Paris accord’s target in the final agreement of the 26th Conference of the Parties, or COP26, as the conference is known.

Frans Timmermans, the European Commission’s vice president, said that “at the end of the COP, we need to be in a position to say we’re still on track to be well below 2 degrees (Celsius; 3.6 degrees Fahrenheit). We still have a shot at the 1.5 degrees (2.7 F goal).”

“All our efforts this week should be directed at that,” he said.

Timmermans said a recent U.N. science report on the progress of global warming was “so alarming that I think there’s nobody that can still be in denial of the crisis we’re already in.” He also stressed the importance of reaching an agreement on transparently reporting emissions, something large emitters such as China in particular have resisted.

“We need to be sure that we’re comparing apples to apples and not apples to oranges,” said Timmermans.

GLASGOW, Scotland ___ Bangladesh's environment minister said the final outcome of the climate talks at Glasgow had to address the gap between the climate targets of countries and the degree to which emissions had to be scaled back for the world to limit warming to 1.5 degrees Celsius (2.7 degrees Fahrenheit).

Minister Shahab Uddin added that there needs to be a deadline for countries to come up with their long-term strategies to achieve their net zero emissions targets. He says longstanding demands -- like increased financing for poor countries and for rich countries to pay for loss and damages due to climate shocks -- needed to be addressed.

He said the science was clear. Failing to limit emissions in this decade would increase the risk “of dangerous and irreversible impacts” on natural systems and people. He said the global community still lacked the “feeling of urgency and true commitment” to implement climate action.

GLASGOW, Scotland___ World leaders made “inspirational” pledges at the start of climate talks in Glasgow, but inside the negotiating rooms, thorny political issues continue to reign, said Milagros De Camps, Deputy Minister of Environment of the Dominican Republic.

She said inside the talks, some nations' tactics still looked to delay and deny that there was any urgency. This was in contrast with world leaders, who used doomsday rhetoric to underline the importance of the conference.

She said that there was still resistance to acknowledge that small island nations -- whose very existence is at risk from climate change despite contributing a fraction of the world’s greenhouse emissions -- are a “special case.” She said rich nations needed to live up to the grand pledges and translate that into concrete national targets to combat climate change.

“The needle hasn’t moved, and incrementalism won’t suffice,” she said.

She added that rich nations had to stop subsidizing fossil fuels while fulfilling their old promise of giving poor countries $100 billion every year by 2020.

“The proof of the pudding will be in the eating,” she said.

GLASGOW, Scotland — Former U.S. President Barack Obama says he believes that President Biden's climate package will be “historic” and he welcomed the efforts of all U.S. politicians, Democrats and Republicans, in working toward slowing down global warming.

Obama spoke Monday on the sidelines of the U.N. climate conference in Glasgow.

“I believe President Biden’s Build Back Better bill will be historic. But I know Joe Biden wanted to do even more," Obama said. “Both of us have been constrained by the fact that one of our two major parties have decided to not only sit on the sidelines, but express hostility towards climate science and make climate change a partisan issue.”

"That’s got to stop. Saving the planet isn’t a partisan issue. I welcome any faction within the Republican Party that takes climate change seriously," Obama added.

He said climate change will affect all Americans and everyone on the planet, no matter how they voted.

“It doesn’t matter if you’re a Republican or a Democrat if your Florida house is flooded, or your crops in the Dakotas are failing, or your California house is burning. Nature, physics, climate science – they don’t care about party affiliation,” Obama said. "We need everybody – even if we disagree on other things. “

THE HAGUE, Netherlands — The Dutch government is joining a group of nations, including the United States and Canada, that has pledged to stop funding overseas fossil fuel projects.

It was not immediately clear how much Dutch funding will be affected. Last week, national broadcaster NOS reported that the government was guarantor in 2020 for loans financing fossil fuel projects overseas of more than 4.5 billion euros.

The decision was announced Monday as the United Nations climate summit in Glasgow entered its second week with key issues still unresolved.

State Secretary for Finance Hans Vijlbrief called the move “an important acceleration” and a “major step in the right direction to counter climate change.” Prime Minister Mark Rutte told reporters in The Hague that his caretaker administration had decided over the weekend to halt the financing.

Outlining the move in a letter to the Dutch parliament, the government said it will “prioritize the transition to a green energy supply with its foreign instruments and will work on new policy in 2022 to end international government support for the fossil energy sector.”

The Dutch branch of Greenpeace welcomed what it called an “unavoidable step.”

GLASGOW, Scotland — Ministers from all over the world are arriving in Glasgow to begin the “arduous task” of finding consensus, said Alok Sharma, who is chairing the two-week U.N. climate talks in the Scottish city.

He said the priority is for there to be a “sense of urgency,” while ensuring the talks are transparent and inclusive.

Sharma said countries had made commitments that’ll help the planet, but they had to be delivered and accounted for.

Patricia Espinosa, head of the U.N. climate office, said the world was coming into these talks with the “clear picture that we’re not there.” But at the same time, scientists say that it's still possible to achieve the world’s climate goals, like limiting future warming to 1.5 degrees Celsius (2.7 degrees Fahrenheit). They say that will mitigate the effects of global warming, such as increasing doughts, extreme weather, wildfires and rising seas.

“We need to accelerate the process going forward,” she said.

GLASGOW, Scotland — After a week of negotiations, numerous of the stickiest issues in climate talks remain unresolved and teams of cabinet ministers from different countries are being sent to move things along.

Briefing the United Nations Conference of Parties, or COP26, on the first week’s progress, COP President Alok Sharma had to correct himself, noting that “some” issues had been settled, rather than “many.”

Numerous developing nations were pessimistic. They called progress “disappointing,” saying announcements were high in quantity but worried that they were low in quantity.

No deals have been made yet on the three main goals of the U.N. — pledges to cut emissions in half by 2030 to keep the Paris climate deal’s 1.5 degree Celsius temperature rise goal alive; the need for $100 billion annually in financial help from rich countries to poor ones; and the idea that half of that money goes to adapting to global warming’s worst effects. Several other issues, including trading carbon and transparency, also weren’t solved yet.

And on the issue of more frequent updates of countries' emission-cutting goals — something poorer nations seek — negotiators listed nine different time options for future negotiators to choose from.

Sharma named teams of two ministers — one from a rich country, one from a poor — for each issue to oversee negotiations on each topic.

GLASGOW, Scotland — Rich nations are not being truthful in their commitments to climate change, delegates from developing nations said Monday.

Not fixing the financial pledge problem — the need for $100 billion annually in financial help from rich countries to poor ones to cope with climate change — shows rich nations’ pledges are “an empty commitment,” and without fixing that the climate talks in Glasgow cannot be successful, representatives from several countries, including Guinea, said.

“There is a history of broken promises and unfulfilled commitments by developed countries,” Diego Pacheco Balanza of Bolivia told the conference.

Follow all AP stories on climate change at https://apnews.com/hub/climate.