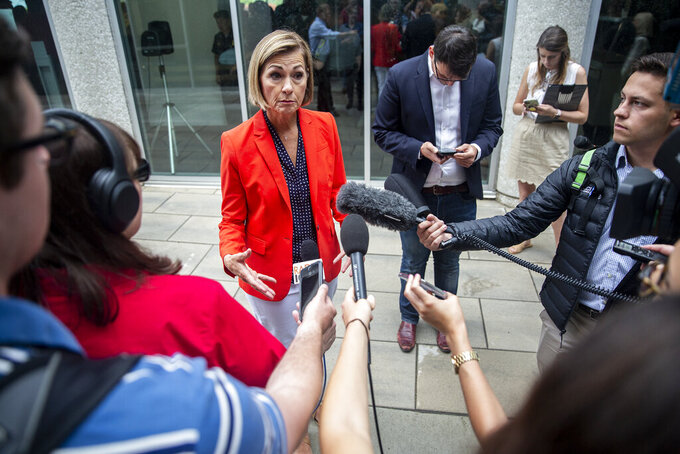 Kelsey Kremer, ASSOCIATED PRESS
Iowa Gov. Kim Reynolds speaks to the press after signing the Back the Blue bill, on Thursday, June 17, 2021, at the Iowa Law Enforcement Academy, in Johnston, Iowa. Reynolds signed into law the sweeping pro-police bill that also heightens criminal penalties for certain protest activities disappointing supporters of criminal justice reform who had hoped the governor and lawmakers would fulfill promises made last year to consider a ban on racial profiling by police and other measures that would ease mistreatment of minorities by police. (Kelsey Kremer/The Des Moines Register via AP)

“Instead of furthering an important discussion about anti-racial profiling measures and modernizing our public safety departments Gov. Reynolds took a giant step backward," said Rep. Ross Wilburn who is also chairman of the Iowa Democratic Party and member of the Legislative Black Caucus.

He said the promise she made last year and her commitment in the Condition of the State address in January to further work on racial profiling and other reform were lies.

“She gave into the prejudice within her own party,” Wilburn said.

The bill makes it easier for police to charge activists for public disorder, obstructing a roadway and engaging in unlawful assembly.

It makes it harder to sue and win monetary damages from police with qualified immunity language, provides legal protection from lawsuits for the driver of a vehicle who may strike a participant in a protest or demonstration. It restricts the circumstances in which an officer may be discharged, disciplined or threatened with discharge, and it expands sick leave and workers’ compensation rights for public safety employees.

American Civil Liberties Union of Iowa Executive Director Mark Stringer said the law is “clearly an effort to shut down public criticism of abuses by law enforcement.” He said it gives police less accountability by putting into law broad immunity from many state law claims brought in lawsuits by those alleging harm by police.

Reynolds signed the bill in front of about 150 officers from local and state agencies, Iowa Law Enforcement Academy students and lawmakers.

“Like so many Iowans I was raised to be grateful to the heroes who patrol our streets at great personal risk and sacrifice and tragically this fundamental and wholesome part of America’s culture is now under vicious attack,” she said. She told the law enforcement officers that “your governor, your legislature and your state stand behind you.”

Reynolds characterized racial unrest protests which occurred across the country last year after the killing of George Floyd by a Minneapolis police officer as lawless.

“Last summer when lawless mobs across the country coopted peaceful protests to riot and loot, Iowa experienced its share of unrest. The Back the Blue Act responds by making rioting a felony so if you riot, if you loot if you attack our law officers then you will be punished the fullest extent of the law,” she said.

Reynolds' response to a question about how the new law’s penalties will disproportionally impact minorities: “don’t break the law and it wont apply to you.”

Most of the new law goes into effect immediately. Some aspects of it that offer new workers compensation, disability and medical benefits to officers are retroactive to Jan. 1 of this year.

Reynolds introduced measures at the start of the 2021 legislative session to ban racial profiling by police and establish a system for tracking racial data on police stops, among many recommendations from a task force Reynolds appointed and headed by Lt. Gov. Adam Gregg, who was not at the bill signing.

Instead, Republican lawmakers left out those sections of Reynolds’ proposal and pushed through the bill with new rights and privileges for police and new penalties for protesters.

Reynolds has said she plans to propose the criminal justice reform measures again next year in a separate bill but the black caucus members were skeptical.

Wilburn also criticized the timing of the bill's signing two days before June 19, a day observed as Juneteenth to celebrate the date that word reached Texas that the Civil War was over and slaves would be freed.