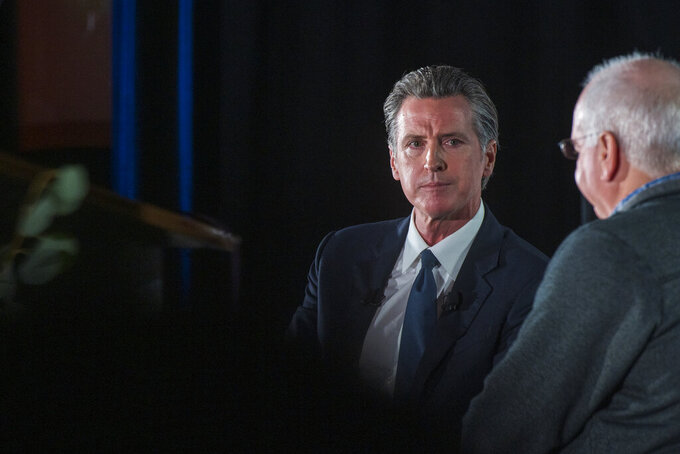 Newsom has a full schedule again after after receding from public view for nearly two weeks. He said Tuesday that he chose to take his children trick or treating on Halloween instead of discussing climate change with world leaders in Scotland, explaining the decision to abruptly cancel his trip was driven by the simple desire of a working parent to spend more time with his kids.

The Democratic governor's comments, delivered at an economic summit in Monterey, came after increasing media coverage and criticism from Republicans about his whereabouts and what he was doing. His last public event had been Oct. 27 when he got a coronavirus booster shot and then two days later his office issued a brief statement saying he was canceling his travel plans for unspecific “family obligations.”

His staff would not answer questions about where he was or what he was doing for much of that time. However, photos over the weekend published in Vogue showed Newsom attending the wedding of Ivy Love Getty, the granddaughter of the late billionaire oil tycoon J. Paul Getty whose family members have been major donors to Newsom’s campaigns.

By Monday, Newsom’s absence had prompted speculation about his health, mostly among conservatives on social media who rallied around the hashtag #wheresgavin. Newsom’s wife, Jennifer Siebel Newsom, added to the intrigue on Sunday night with a since-deleted tweet telling people to “please stop hating and get a life.”

But Tuesday, Newsom said his absence was nothing more than a chance to recharge with his family after a frenetic three years in office that included an unprecedented pandemic, record-breaking destruction from wildfires, a drought and fighting for his political life in only the second gubernatorial recall election in state history. Newsom beat back the recall in September and then spent the next several weeks considering hundreds of bills passed by the Legislature.

Climate change is a signature issue for Newsom, who many believe has aspirations of running for president some day. Attending the conference would have given him the opportunity to tout his climate change initiatives, which include banning sales of new gas-powered cars and trucks by 2035 and raise his profile with world leaders.

But as the trip neared, his children took the initiative.

“I’ve been on this damn treadmill, we’ve gone from crisis to crisis,” Newsom said. “The kids, literally, they kind of had an intervention. They said they couldn’t believe that I was going to miss Halloween.”

Newsom said for his kids, who range in age from 5 to 12, missing Halloween is worse than missing Christmas. “I had no damn choice; I had to cancel that trip,” he said.

Newsom’s comments earned applause from the audience and praise from his fellow Democrats in the state Legislature, many of whom blamed the governor’s political opponents and the media for blowing the story out of proportion.

Assemblyman Ash Kalra tweeted that had Newsom attended the conference, he would have been criticized “for traveling overseas instead of staying home attending to the state.”

Wesley Hussey, a political science professor at Sacramento State University, said Newsom could have prevented much of the fuss if he had simply said at the outset why he wasn’t attending the conference and taking a step back from public appearances.

“I think this is an example of where the governor and his press operations need to be aware of social media and distortions and always being in front of the story,” he said. “I think we should know what the governor is up to and give the governor space when he needs family time. And I think that those can go together.”

Neither the governor nor his representatives said why they didn’t offer details about Newsom’s whereabouts before this week. On Monday, Newsom’s office said the governor had been working in the Capitol on “urgent issues, including COVID-19 vaccines for kids, boosters, ports, the forthcoming state budget and California’s continued economic recovery.”

Newsom routinely has multiple public appearances each week. He relishes his role as leader of the nation’s most populous state, which if it were its own country would have the world’s fifth-largest economy. That’s what made his absence following his sudden withdrawal from the climate conference so curious.

“A governor’s absence is always a matter of public concern. That’s especially true for a governor claiming sole authority to control people’s lives through a ‘State of Emergency,’” tweeted Republican Assemblyman Kevin Kiley, who ran for governor in the recall election. Kiley has repeatedly tried and failed to convince his colleagues in the Democratic-controlled state Legislature to limit Newsom’s emergency powers during the pandemic.

Newsom’s allies quickly came to his defense on social media. Assemblywoman Lorena Gonzalez, a San Diego Democrat, tweeted that Newsom “is a husband & father of 4 young children who worked his butt off nearly every day during this pandemic & was rewarded by facing a ridiculous partisan recall election. I don’t care what he’s taking time to do with his family, he deserves time off.”

When he emerged Tuesday, Newsom added details of his week out of the spotlight. He went to his kids’ soccer tournament and took them trick-or-treating, having quickly obtained a pirate costume to join them. He said he brought his children to the Capitol last week, participating for the first time in tourist traditions like taking a selfie with the statue of a grizzly bear — the animal that appears on the state flag — outside of the governor’s office.

The children also got coloring books that are regular handouts from the Senate president pro tempore’s office.

“It’s been probably the most productive week I’ve had since I’ve been governor,” Newsom said.