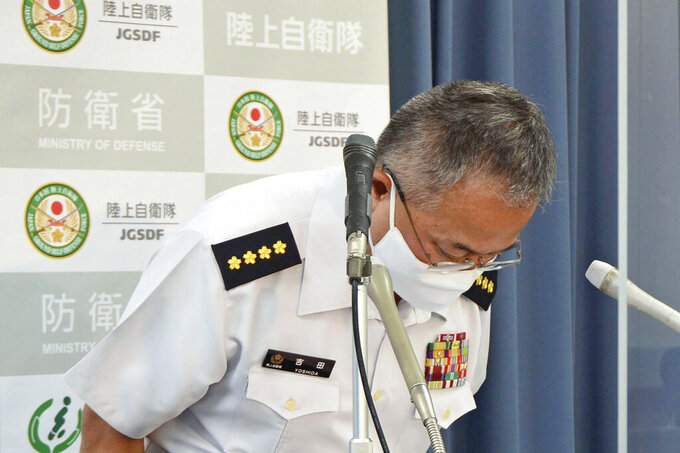 Uncredited, ASSOCIATED PRESS
Yoshihide Yoshida, head of Japan’s Ground Self-Defense Force apologize during a news conference in Tokyo Thursday, Sept. 29, 2022. Yoshida apologized to a former soldier for her "pain" because of sexual harassment she was inflicted by a group of servicemembers. (Kyodo News via AP)

TOKYO (AP) — In a rare admission of sexual harassment in Japan’s military, its army chief apologized Thursday to a former soldier for suffering caused by a group of servicemembers.

“Representing the Ground-Self Defense Force, I deeply apologize to Ms. Gonoi for the pain she had to suffer for a long time,” Yoshida told a news conference. “We offer a sincere apology.”

The investigation is continuing and further details, including the assailants and their punishment, have not been released.

Gonoi welcomed the apology and thanked those who supported her, but added that “my battle is not over.”

“I’m determined to get an apology directly from the perpetrators," she tweeted.

Japan’s Defense Minister Yasukazu Hamada earlier this month ordered a ministry-wide investigation into growing reports of sexual assault after Gonoi brought allegations of harassment of her and others.

Gonoi came forward in late August to request a reinvestigation of an alleged assault of her in 2021 by former male colleagues. She also said she had received information from 146 servicemembers who said they had been harassed while on duty.

The ministry said the number of various types of harassment complaints rose from 256 in 2016 to 2,311 last year.

In a country where gender inequality remains high, sexual harassment is often disregarded and the #MeToo movement has been slow to catch on. But Japanese women have started to speak up, including in the film industry.

Earlier this year, two film directors apologized after media reports emerged about sexual abuse allegations brought by several women, prompting a group of filmmakers and others in the industry to call for improvement.

Gonoi submitted a petition earlier this month to the Defense Ministry signed by more than 100,000 people seeking a reinvestigation of her case by a third party.

She said three senior male colleagues in August 2021 in a dorm at a training ground pressed the lower part of their bodies against her, forcing her to spread her legs, as more than 10 other male colleagues watched and laughed, but none tried to stop them.

Gonoi said in a statement that she filed a case with the ministry, but the investigation was not properly conducted and local prosecutors dropped the case in May.

A month later, she quit the army and disclosed her allegations on social media.

Gonoi said she felt her case had been quashed and she had to raise her voice because there could be more victims if she didn’t.

The defense ministry dispatched investigators to the regional army division overseeing the unit where Gonoi served. It also created a panel of outside experts to review measures against harassment and study the causes of the recent increase in reported cases.

Gonoi said she came forward in hopes that the problem would be mitigated and the ministry would release the findings in her case and take strict disciplinary action against the alleged assailants.

The ministry found more victims in other cases, Kyodo News agency said, and the final report is expected soon.