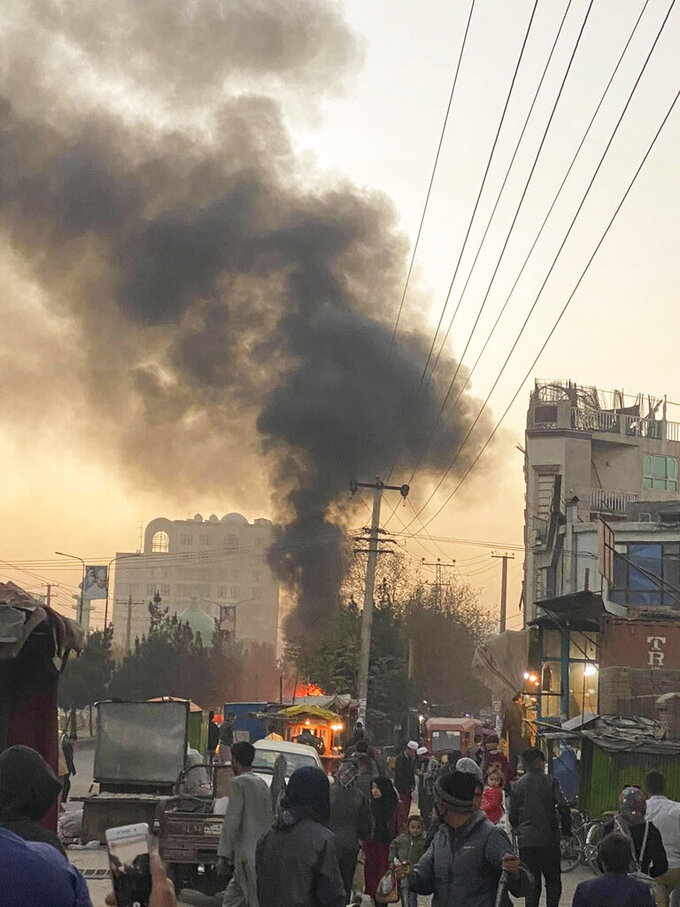 Uncredited, ASSOCIATED PRESS
Smoke rise on the sky following a bomb explosion in Kabul, Afghanistan, on Saturday, Nov. 13, 2021. Emergency workers say a bomb has exploded on a mini-bus on a busy commercial street in a Kabul neighborhood mainly populated by members of Afghanistan’s minority Hazara community. (AP Photo)

KABUL (AP) — A bomb exploded on a mini-bus Saturday on a busy commercial street in a Kabul neighborhood mainly populated by members of Afghanistan's minority Hazara community, emergency workers and the bus driver said. At least one person was killed and five wounded.

Workers with the ambulance teams at the scene told The Associated Press that the blast appeared to have been caused by a bomb on the bus.

The bus driver, speaking to the AP at the hospital, said that at one point during his route, a suspicious man got onto the bus and a few minutes later, the explosion went off at the back of the bus.

The driver, who goes by a single name Murtaza, said he saw two passengers with their clothes on fire falling out of the back of the vehicle while other passengers escaped out the front.

The spokesman for Afghanistan’s ruling Taliban, Zabihullah Mujahid, told the AP that a fire broke out on the mini-bus and caused an explosion, killing one person and wounding another.

Photos from the scene showed the burning wreckage of a vehicle with a pall of smoke rising into the air. The explosion took place on the main avenue running through Dashti Barchi, a sprawling neighborhood on the west side of Kabul largely populated by Hazaras.

Afghanistan's Hazaras, who are mostly Shiite Muslims, have been the target of a brutal campaign of violence for the past several years, blamed on the Islamic State group. Militants have carried out several deadly attacks in Dashti Barchi, including a 2020 attack on a maternity hospital.