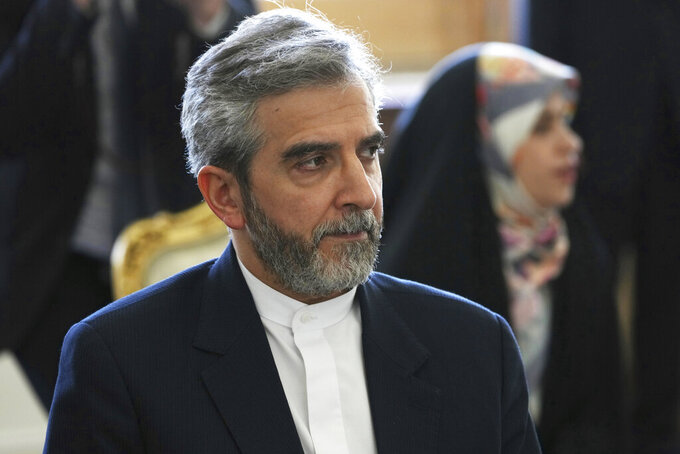 UNITED NATIONS (AP) — Iran said Thursday it is ready for new indirect talks with the United States to overcome the last hurdles to revive its tattered 2015 nuclear deal with major powers amid a growing crisis over the country's atomic program.

“The ball is in U.S.’ court, and if the U.S. acts realistically and shows its serious intention to implement its obligations, the agreement is not out of reach,” he added.

Ravanchi’s remarks came a day after indirect negotiations between Iran and the U.S. ended in Qatar after failing to make significant progress. Yet Ravanchi described the Qatar talks as “serious and positive.”

He said Iran will contact the European Union coordinators “for the next stage of talks.”

During intensive consultations with EU's foreign policy chief Josep Borrell in Tehran last week “Iran once again emphasized its willingness to provide creative solutions to the remaining issues in the hope of ending the deadlock,” Ravanchi said.

He spoke at a Security Council meeting on the U.N. resolution that endorsed the 2015 nuclear deal and its five permanent members — the U.S., Russia, China, Britain and France — and Germany. In 2018, then-President Donald Trump pulled America out of the agreement, known as the JCPOA, raising tensions across the wider Middle East and sparking a series of attacks and incidents.

President Joe Biden's administration has been working to renew the agreement, which placed curbs on Iran’s nuclear program in exchange for billions of dollars in sanctions relief, which Iran insists it has never received.

The State Department said after this week’s talks in Doha that Iran “raised issues wholly unrelated to the JCPOA and apparently is not ready to make a fundamental decision on whether it wants to revive the deal or bury it.”

Before Ravanchi spoke, U.S. deputy ambassador Richard Mills told the council that the United States “remains committed to a mutual return to full implementation" of the JCPOA.

Mills said the U.S. has been prepared for months to conclude a deal based on understandings negotiated in Vienna in March, “but we can only conclude a deal, and implement it, if Iran drops its additional demands that are outside the scope of the JCPOA.”

The Vienna talks have been on “pause” since March. And since the deal’s collapse, Iran has been running advanced centrifuges and rapidly growing stockpiles of enriched uranium to 60% purity, a short, technical step away from weapons-grade levels.

However, Tehran continues to suffer under intense economic sanctions while the West hopes to again curtail its nuclear program.

Before the council meeting, France, Britain and Germany issued a joint statement saying Iran’s nuclear program “is now more advanced than at any point in the past” and its actions “are rapidly unsettling the balance of the package we had negotiated over many months.”

The statement urged Iran “to conclude the deal, while it is still possible” and warned that its actions raise further obstacles to the IAEA's ability “to provide assurance of the peaceful nature of Iran’s nuclear program.”

U.N. political chief Rosemary DiCarlo expressed hope that Iran and the United States “will continue to build on the momentum of the last few days of talks” in Qatar to resolve the remaining issues.

While the U.N. nuclear agency hasn’t been able to verify Iran’s stockpile of enriched uranium, it estimates that the stockpile is more than 15 times the amount allowed under the JCPOA, including uranium enriched to 20% and 60% — “which is extremely worrying,” she said.

Also, the International Atomic Energy Agency reported that Iran has started to install additional advanced centrifuges at enrichment plants at Natanz and Fordo.

EU Ambassador Olof Skoog said that in view of Iran's “worrying nuclear trajectory" and new U.S. sanctions, it's vital that an agreement is concluded as soon as possible, stressing that “the space for further significant changes has been exhausted."

“This is important for Europe, for Iran, the region but also the world as a whole that — now more than ever — needs more security and stability," Skoog said.

“Attempts to step up pressure on Iran through unwarranted fueling of tensions around the JCPOA could fully invalidate prospects for reviving the deal,” he cautioned and urged all parties to focus on compromise.