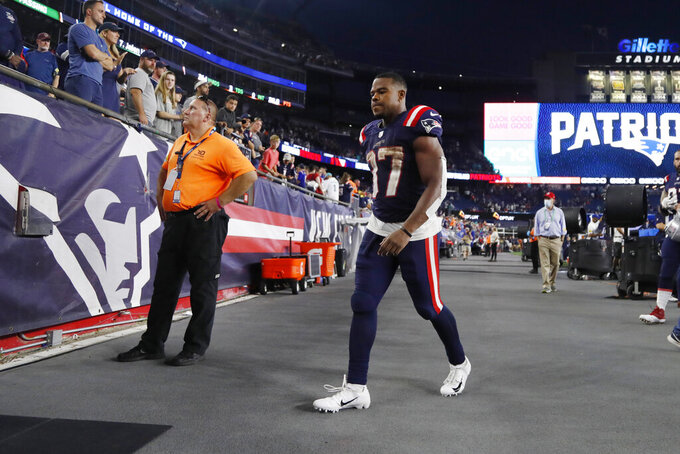 FOXBOROUGH, Mass. (AP) — The choreographed movements of the handshake Mac Jones and Damien Harris share before every practice are fast and hard to decipher.

It begins with a quick grasp of hands and touch of the fingertips, followed by two palm slaps. Then comes a dancing shimmy and flex, ending with both men angling their arms downward in a sort of modified salute.

It’s a special greeting reserved just for the two of them — a small carryover of the bond that first began when they were college teammates at Alabama and revived when they were reunited in New England this summer after Jones was selected 15th overall by New England in April’s draft.

Harris marked that occasion with a tweet that night, sharing a video of the pair sharing one of their signature handshakes during their Crimson Tide days.

“We just created it when I was young,” Jones said this week. “When I got here, he was extremely excited, and I was too because that’s one of the people that is one of my closest friends.”

The duo has leaned on each other this week coming off the Patriots’ 17-16 season-opening loss to Miami. While it ruined a solid first career start for Jones, it was especially biting for the second-year Harris, whose fourth career 100-yard rushing game was marred by his costly fumble in the fourth quarter with New England driving for a go-ahead score. Miami recovered and was able to run out the clock.

In his short time in the NFL, Jones said Harris has been one of the first guys to pick him up when he's sensed Jones was struggling. This week, the roles have been reversed as the Patriots prepare for their first road matchup of the season against the Jets on Sunday.

Prior to Sunday’s loss, the Patriots had only one four-fumble game since 2018.

After the loss Harris acknowledged his mishap, adding that he’s “not going to let this mistake define me.”

Jones said it’s the kind of accountability he has come to expect from his friend.

“He’s a thick-skinned guy, but he’s hard on himself. Just like me and a lot of the other guys on our team,” Jones said. “I feel like there’s a lot of perfectionists on our team, so yeah. Damien’s hard himself. But today he’s running the ball hard and doing exactly what he’s supposed to do, so that’s about what you expect out of him.”

Those expectations extend throughout the Patriots’ locker room.

“For Damien, that stings, man. That stings like a son of a gun,” running backs coach Ivan Fears said. “The whole team is sitting there ... all their faith is in you. And he’s had to ride with that. He’s had to deal with that. I’ll tell you, he’s the kind of guy that’ll come out all right.”

Coincidence or not, one of the Patriots’ first drills in practice at the start of the week was on ball security. It was less of a knock on Harris, as a reminder to everyone that details matter.

“I think it’s definitely necessary,” receiver Jakobi Meyers said. “It’s not really an elephant in the room, we all know we fumbled a good amount of times. It’s our responsibility as a team to go out there and fix it.”

Running back James White said it’s always been part of their practice routine, but that the sense of urgency has been dialed up.

“It will make guys better,” he said. “I think it’s going to be at the forefront of everybody’s mind. When we’re all running with the football we should protect it, because that’s what all defensive coaches are going to be preaching now.”

In the meantime, Jones said he’s taking it upon himself to ensure Harris knows he still has the full confidence of his teammates.

“Hopefully we can just continue on our journey together and go through the ups and downs together,” Jones said. “Whenever he ever feels like I’m down or something, he always comes over and is just, ‘Hey, you’re good. Let’s go.’ That’s how he is, and that’s how a lot of guys on our team are, and that’s why a lot of people love Damien.”