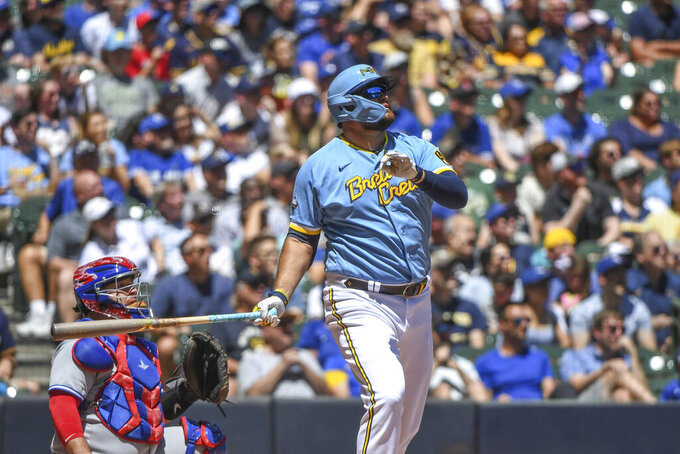 Milwaukee took two of three in the series between teams meeting for the first time since 2017.

Tellez, traded from Toronto to the Brewers last July, homered in the first inning. He then connected in the second for his 13th home run.

“Any time you can put runs on the board after they have, it’s huge,” Tellez said.

Milwaukee scored five times in the second. Tyrone Taylor led off with a double, Jace Peterson then reached on a perfectly executed drag bunt and Jonathan Davis had an infield single that brought in a run. The Brewers also stole two bases in the inning.

After Christian Yelich had an RBI grounder, Tellez homered again off José Berríos (5-4), driving a pitch over the right-field wall. The drive gave the Brewers an 8-3 lead as a crowd of more than 35,000 stood and chanted Tellez’s name.

“Berríos obviously didn’t have his stuff today,” Tellez said. “He left some pitches over the heart and was having trouble commanding stuff, and we made him pay.”

Tellez has two multi-homer games this season and seven in his career.

“It’s a day where the offense really picked us up and gave us a great cushion," Milwaukee manager Craig Counsell said. "Rowdy had a big day but up and down the lineup a lot of guys did good things. They carried us today. They made pitchers' jobs much easier.”

Alejandro Kirk hit a three-run homer in the Toronto first. After Tellez homered in the bottom half, a run-scoring double by Omar Narváez later in the inning pulled Milwaukee even.

González, making his second start for the Brewers, gave up four hits and three runs in four innings.

“We stuck to the guns with the sinker,” González said of settling down after allowing the first-inning homer. “I was able to get some calls down in the zone.”

Berríos allowed eight hits and a season-high eight runs in 2 2/3 innings. He surrendered six runs over four innings in his previous start on June 20 against the Chicago White Sox.

“It’s taxing on the bullpen. At the end of the day, it’s all about pitching,” Toronto manager Charlie Montoyo said. “For us to make a run, we need good ptiching and that hasn’t happened the last couple of days."

“It’s always a worry, but he’s got a track record so I’m sure he’s going to bounce back,” Montoyo said. “He’s a good big league pitcher.”

The outing frustrated Berríos, who had allowed three runs over 19 innings in his career against the Brewers before Sunday.

“It was one of those days,” he said. “I threw a better breaking ball but they were aggressive early with my fastball. I was throwing my fastball right in the middle and they did damage with it. I want to keep competing. I know I have great stuff and can compete at this level.”

Blue Jays: OF George Springer returned to the starting lineup after missing three consecutive games with right elbow discomfort. … Kirk started behind the plate after serving as DH on Saturday. Kirk got his hand got clipped by the backswing of Davis, forcing him to leave Friday night’s game.

Brewers: Placed OF Hunter Renfroe on the 10-day injured list with a left calf strain and recalled INF/OF Pablo Reyes from Triple-A Nashville. … 2B Kolten Wong, who has been on the IL with a calf injury, played the second game of rehab assignment with Class A Wisconsin on Sunday and homered in his first at-bat. Counsell said he expects Wong to join the team for Tuesday's game in Tampa.

After hitting home runs in his first two at-bats, Tellez's teammates stood on the top step of the dugout for his next three plate appearances. “I know this whole organization, this whole place cheers for him, roots for him and we do, too," González said. “It’s also awesome to see him do that against his former team.”

Kirk, who has 10 home runs on the season, has homered in four of the last five games. The Blue Jays catcher had nine career homers before this season.

Blue Jays: RHP Kevin Gausman (5-6, 3.19 ERA) will start as Toronto returns to Canada to host the Red Sox on Monday to begin an eight-game homestand. Gausman is 5-8 with a 4.01 ERA in 22 career appearances (17 starts) against Boston.

Brewers: After a day off on Monday, Milwaukee is on the road to take on the Tampa Bay Rays. RHP Brandon Woodruff (5-3, 4.74) will start on Tuesday for the first time since May 27 at St. Louis. Woodruff has been on the 15-day injured list with a right ankle sprain and Raynaud’s syndrome, which affected the fingers on this throwing hand.