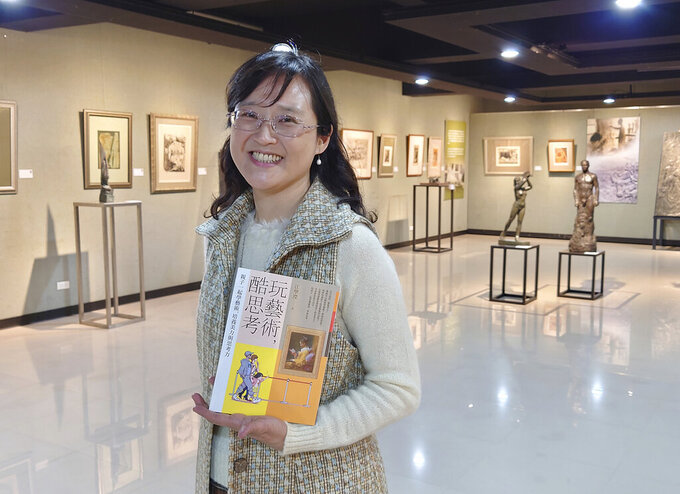 Chiang Ying-ying, ASSOCIATED PRESS
In this photo taken on March 23, 2021, Taiwanese author Iris Chiang holds her book "Play with Art" at the saloon featuring Taiwanese artist YUYU Yang's work in Taipei, Taiwan. Four years on after being sold to a Chinese publisher and no going to press, Chiang's book that teaches children how to appreciate art has fallen victim to the heightened tensions between China and Taiwan that are spilling over into the cultural sphere. (AP Photo/Chiang Ying-ying)

TAIPEI, Taiwan (AP) — Taiwanese author Iris Chiang hardly seems like the type whose work would be banned from publication in China. Yet four years after being sold to a Chinese publisher, her book teaching children how to appreciate art has yet to go to press, a victim of heightened tensions between China and Taiwan that are spilling over into the cultural sphere.

It’s not just about losing access to the huge Chinese market, authors and publishers say. It’s also about losing opportunities to exchange and connect, after three decades of growing contact between the two. In recent years, China has cut the flow of Chinese tourists and students to Taiwan and blocked its artists from taking part in Taiwan’s Golden Horse and Golden Melody awards, regarded as the Oscars and Grammys for Chinese-language movies and music.

China claims Taiwan, a self-governing island about 160 kilometers (100 miles) off China’s east coast, as its territory. The election of Tsai Ing-wen, who favors Taiwan’s current de facto independence, as the island’s president in 2016 ushered in a period of deteriorating relations. China has tried to isolate the island diplomatically and pressure it militarily.

While China’s ruling Communist Party has long banned books on sensitive issues from religion to the lives of Chinese political leaders, Taiwanese publishers previously sold a wide variety of other books to the mainland, drawing on a shared language and cultural history.

“Exchanges in publishing is really the exchange of ideas,” said Linden Lin, the head of Linking Publishing Co. in Taiwan. “It’s only through publishing that you can have this type of exchange.”

Now, any Taiwanese book has become harder to publish in China, according to editors, academics, publishers and authors. It is not a blanket ban, and publishers blame self-censorship by their mainland counterparts rather than any official order.

Titles that have been frozen out include a Taiwanese-Japanese fusion cookbook, a self-help book and a book of travel sketches from a Taiwanese artist’s travels in Beijing that featured cats roaming the city’s traditional “hutong” neighborhoods.

One sticking point is any content that suggests a separate Taiwanese identity. Younger Taiwanese in particular have developed a distinct identity. A 2020 poll found that two-thirds of the respondents didn’t think of themselves as Chinese.

“In the past, they would censor books about religion. … But for example if a book’s topic is Taiwan’s food then that’s fine,” said Rosine Liu, an editor at Taiwan’s Business Weekly, who previously sold two cookbooks by a Taiwanese author to China. “But now I feel like now if it’s called ‘Taiwan Cuisine,’ even that’s a little stressful.”

The soft-spoken Chiang thought she would market her book, “Play with Art,” toward prosperous parents in China, where the government was encouraging many people to have more kids — a fact she learned from one of her students from the mainland.

Things went smoothly with the Chinese publisher at first. At their request, she agreed to change one chapter that used examples from art museums in Taiwan. A Chinese writer would substitute a chapter based on museums in China.

Then the other side went silent, she said. When she reached out more than a year later, she was told the review process was slower than normal.

“After we got a new president, the response from the other side — the harshness of the situation and the unfriendliness — has created a lot of tedious things that make it inconvenient to have an exchange,” Chiang said.

That’s in sharp contrast to the 1980s and 1990s, when Chinese readers were drawn to Taiwanese writers such as Lung Ying-tai, whose essays contributed to the debate on Taiwan’s transformation from one-party rule to democracy. Sanmao, a Taiwanese writer who wrote stories about her life in the Sahara desert, captured a generation of Chinese women’s hearts.

There was also curiosity about the most basic things, after the two were cut off for decades following their split in 1949 during a civil war in China.

“Back then, relations were good and it seemed like there was a mood in China that they really wanted to understand Taiwan,” Chiang said. “What kind of fruit do you guys eat? What’s your art like? What’s your life like? How do you celebrate New Year’s? These small things in life.”

Now, Taiwanese are also sensitive to the heightened tensions, highlighted by debate last year over a children’s book from China. “Waiting for Dad to Come Home,” about a boy whose father was out of town during the Lunar New Year holiday treating COVID-19 patients, paints a rosy picture of China’s efforts to fight the pandemic.

Some in Taiwan argued China was using the island’s open environment to spread propaganda. But a government proposal to vet books from the mainland prompted criticism that the island would be falling back on authoritarian habits.

“If we say we are afraid that the people will see fake news, that I will help them filter information … then how can you call this democracy?” said Lai Hsiang-wai, a professor of press freedom at National Taiwan University of Arts.

The government dropped the proposal, saying it would only censor books published by the Communist Party or its military, the People’s Liberation Army.

Liu, the editor, said it was never a purely commercial exchange for her. She enjoyed meeting her mainland counterparts at book fairs and learning about their way of doing things. In the current political climate, these very basic human moments of exchange, which had helped people forge a connection to each other, have disappeared.

“For me, in this harsh environment, you will also shrink yourself, because that type of cooperation is mutual,” said Liu. “Because in the end we are all still carrying this burden of country and this burden of history.”

This story corrects the name of Taiwan's film awards to Golden Horse instead of Golden Rooster.