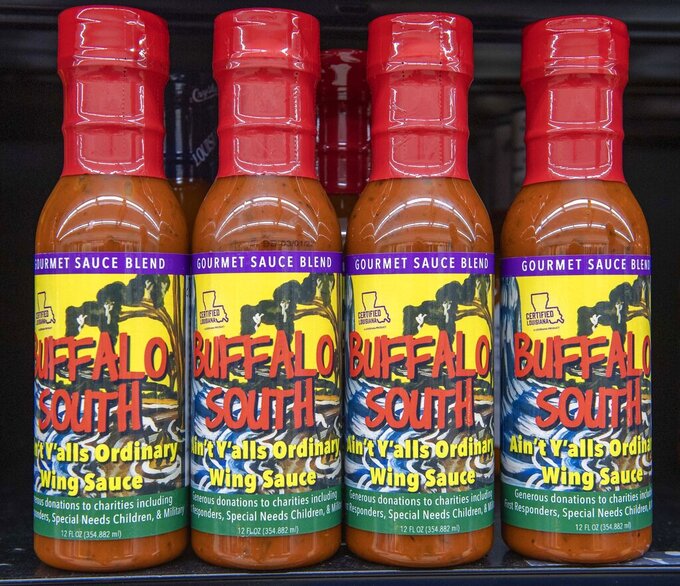 BILL FEIG, ASSOCIATED PRESS
The father and son team of Ryan and Randy Mast show their Buffalo South sauce at Bet-R Neighborhood Market located at 2812 Kalurah Street Thursday Oct. 14, 2021, in Baton Rouge, La. Randy began making the sauce in his kitchen in Donaldsonville some years ago, and now they're distributing it in local grocery stores in Baton Rouge and New Orleans. Five percent of their profits goes to nonprofits for special needs people. Bet-R was the first grocery store to stock Buffalo South sauce and Bet-R employs special needs people.(Bill Feig/The Advocate via AP) 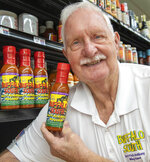 BATON ROUGE, La. (AP) — When Randy Mast couldn’t find the chicken wing sauce his wife craved, he decided to make his own.

This was in the late 1970s, before Buffalo wings were a thing.

And his wife was really missing the sauce that doused the chicken wings in her native Buffalo, New York.

So Mast fired up the stove in his Donaldsonville kitchen and began cooking.

“Buffalo wings were only known in western New York (at the time),” he said. “My wife wanted wings, and I said, ‘I’m not driving to Buffalo.’ We lived in the Baton Rouge area. So I just started experimenting with different ideas, and I came up with a sauce that we liked. And finally one day, I just wrote it all down, and I’ve kept it. And that’s been 40 some years.”

Now Mast and son Ryan have turned that recipe into a company: Buffalo South, a gourmet sauce that has the taste of Buffalo, New York, with a little south Louisiana mixed in.

“I was just new to Louisiana and learning about Southern cuisine and all the different flavors and so forth,” Randy Mast said. “And what it is is a blend of several different pepper sauces. But then I added the herbs and the spices and the seasonings and other flavoring that gives it its appearance. I added different spices and so forth until I came up with a combination that I really liked.”

And, it’s not really just for chicken wings.

“It can be put on just about anything,” said Ryan Mast. “We’ve even put it on ice cream, and it was a hit. And it can be mixed with other things to change the taste.”

Buffalo South gourmet sauce can now be found in 45 Baton Rouge area grocery stores, including Bet-R Neighborhood Market, Rouse’s, as well as some in New Orleans. A few Michigan stores — Randy Mast is a native — even stock it.

The business grew slowly, from Randy Mast cooking up six gallons at a time to commercial distribution in 2019. The Masts commissioned Donaldsonville artist Alvin Batiste to design the label, which shows Niagara Falls flowing into a Louisiana bayou, with lettering by the artist Simon Hardeveld, known as Simon of New Orleans.

The label is the Masts’ way of illustrating the marriage of western New York and Louisiana tastes.

In August 2019, Parish Foods in Rayne began mixing, bottling and packaging the sauce, which Randy Mast picks up and distributes.

Ryan Mast said he hopes the percentage will increase as future distribution and sales escalate.

“We’re not paying bills with this thing,” Ryan Mast said. “But it is fun and yes, we love to make it. But the net income is not as important as people enjoying the sauce and helping charities. Do we want to make a million, 2 million? 10? Of course. But we would also up our charity donations. You give it back. That’s the way I was raised and have always lived. The more you get, the more you can give back.”

While standing in the condiment aisle at Bet-R, Randy Mast grabbed a bottle of Buffalo South from a shelf and compared it to competing sauces. Some were a lighter color; others a little darker.

But, he pointed out, rotating the bottle between his fingers, his sauce has an added bit of Louisiana.

“You can see the small pieces of peppers in the sauce,” Randy Mast said. “There’s no other sauce that looks like this.”

As sauce distribution grows, the Masts have donated a portion of their profits to the Lighthouse for the Blind in New Orleans, the Down Syndrome Association and The Miracle League in Baton Rouge.

“That’s what it’s all about,” Ryan Mast said. “One, I want people to enjoy the sauce. Again, this isn’t just a wing sauce. You can put it on a hamburger or oysters or ice cream or even mix it with other sauces to create a different taste. It goes with everything.

“But we also want to help people. Every time a bottle leaves the shelf, a percentage of those proceeds will end up with a charity.”