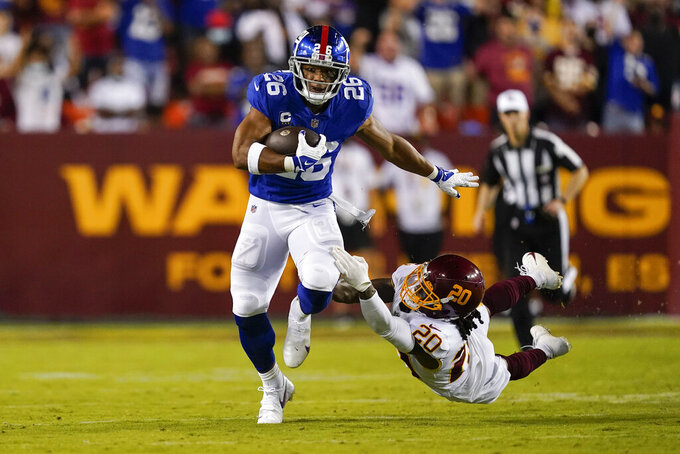 Alex Brandon, ASSOCIATED PRESS
New York Giants running back Saquon Barkley (26) breaks away from Washington Football Team cornerback Bobby McCain (20) as he runs with the ball during the first half of an NFL football game, Thursday, Sept. 16, 2021, in Landover, Md. (AP Photo/Alex Brandon)

Defense was supposed to be the biggest reason to believe Washington could repeat as NFC East champions, and it still might turn out to be.

But through the first two weeks of the season, the unit led by reigning Defensive Rookie of the Year Chase Young has not lived up to lofty expectations. Quarterback Taylor Heinicke showed Thursday night he could run the offense and led a comeback victory against the New York Giants, and yet the defensive struggles are the biggest question facing Washington going into a brief break before visiting the Buffalo Bills.

Washington allowed New York to score 29 points and gain 391 yards a week after the Chargers put up 20 and 424. That's a far cry from last season, when this unit ranked second in the NFL.

“We just have to do better,” defensive tackle Jonathan Allen said. "It’s not like the issues are we’re just not good enough. We obviously have the talent. We just got to focus on the little things, and honestly, thank God our offense was there to save us time and time again.”

Allen sacked Daniel Jones twice, and beyond that Washington did not get the kind of pressure the front has to for the defense to control play. Young did not buy into that perception, saying: “I feel like we were getting there. We just got to clean up the zone reads.”

The defense has a lot to clean up quickly with Buffalo's Josh Allen, New Orleans' Jameis Winston and Kansas City's Patrick Mahomes the next three QBs on the schedule. Coach Ron Rivera, who played linebacker, believes Washington's defensive problems are all correctable and stem from a lack of discipline.

“It’s something that’s very frustrating for us as coaches,” Rivera said of mistakes made that were part of the game plan. "The players, they’re trusting their teammates to do their job and we’ve got be disciplined enough to do the things we’re supposed to.”

Fortunately for Washington, the offense, which put up 407 yards against New York, none more important than the 40 in the final two minutes — aided by a Giants penalty — to set up Dustin Hopkins' game-winning 43-yard field goal.

“We knew we just needed to get a field goal and we practiced that situation a lot in practice,” Heinicke said. “I thought the guys were ready for it to come to fruition.”

Along with mental mistakes, one of the problems on defense seems to be a lack of effective communication. Once that gets sorted out and the pass rush breaks through, Washington might finally start to see the potential of the talent on that side of the ball.

“We all have to be on the same page,” Rivera said. "Some of that communication is verbal, and some of it is really just understanding what I’m reading and seeing.”

Heinicke was 34 of 46 for 336 yards, two touchdowns and an interception and looked like Washington's starter for the foreseeable future. He shouldn't have to look over his shoulder at Kyle Allen, and there's reason to believe Heinicke might still start in eight weeks or so if original No. 1 quarterback Ryan Fitzpatrick is back from a right hip injury.

Rivera said Washington would take it one game at a time but also praised Heinicke for showing growth and maturity.

“He works extremely hard at it,” Rivera said. "There is a lot of confidence, and you see the swagger and right now his teammates see it. They recognize it, and they’re feeding off of it.”

Critics of Hopkins and any free agent kickers hoping for a vacancy. Sure, he missed his first field goal attempt at the buzzer, but he made two others and validated Rivera for his trust.

“If he’s successful, we’re successful,” Rivera said. "Was it a tough miss originally? Yeah, but there was a chance to redeem himself. He got it, and he made it.”

Washington remains relatively healthy, outside Fitzpatrick and wide receiver Curtis Samuel, who will miss at least the Bills game on IR with a lingering groin injury.

Heinicke targeted Terry McLaurin 14 times against the Giants, notable because Fitzpatrick did not throw the way of Washington's top receiver once in the quarter and a half before getting injured in the season opener. McLaurin made 11 catches for 107 yards and a touchdown.

A mini-bye week, which Rivera would have preferred later in the season, before visiting Buffalo on Sept. 26.