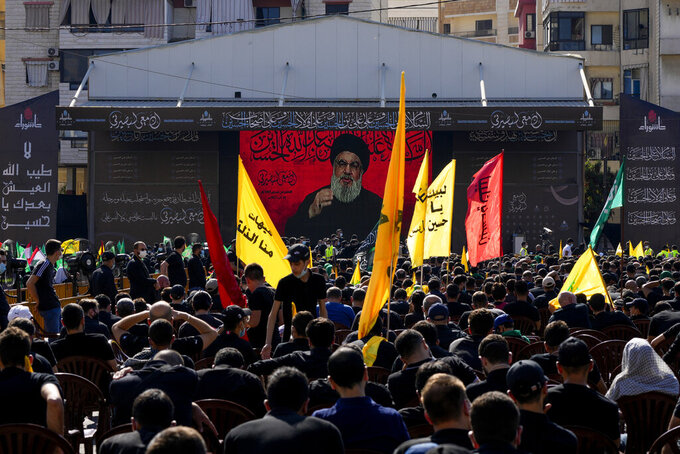 Hassan Ammar, ASSOCIATED PRESS
Hezbollah supporters listen to their leader Sayyed Hassan Nasrallah as he speaks via a video link during Ashoura, the Shiite Muslim commemoration marking the death of Immam Hussein, the grandson of the Prophet Muhammad, at the Battle of Karbala in present-day Iraq in the 7th century, in southern Beirut, Lebanon, Thursday, Aug. 19, 2021. The leader of the militant Hezbollah group Sayyed Hassan Nasrallah said Thursday that the first Iranian fuel tanker will sail toward Lebanon "within hours" warning Israel and the United States not to intercept it. (AP Photo/ Hassan Ammar)

BEIRUT (AP) — The leader of Lebanon's militant Hezbollah group said Thursday that an Iranian fuel tanker will sail toward Lebanon “within hours,” warning Israel and the United States not to intercept it.

The delivery, organized by the Iran-backed Hezbollah, would violate U.S. sanctions imposed on Tehran after former President Donald Trump pulled America out of a nuclear deal between Iran and world powers three years ago.

Sayyed Hassan Nasrallah said in a televised speech that the tanker, carrying diesel fuel, will be followed by others to help ease Lebanon’s crippling fuel shortage that has paralyzed the country for weeks.

Lebanon is going through an unprecedented economic meltdown, including a severe fuel crisis.

Hours after Nasrallah's comments, Lebanese President Michel Aoun's office announced that U.S. Ambassador to Lebanon Dorothy Shea told him the United States would help Lebanon get electricity from Jordan and facilitate the flow of Egyptian gas through Jordan and Syria to northern Lebanon.

Shea told Aoun that negotiations are ongoing with the World Bank to pay for Egyptian gas and to fix cables and pipelines that will be used, according to the statement.

There was no immediate comment from the U.S. State Department or the American Embassy in Beirut. Shea, the U.S. ambassador, spoke about the crisis in Lebanon with the English service of the Saudi-owned Al Arabiya TV on Thursday.

In his speech, Nasrallah did not say how Lebanon would pay for the fuel. Earlier, he had said Tehran could be paid in Lebanese pounds. The currency has lost more than 90% of its value since the country's economic crisis began in October 2019.

“I would like to say that at the moment the tanker sails out ... it will be considered in Lebanese territory,” Nasrallah said and blamed the West for what he called an undeclared siege of Lebanon that triggered the current crisis.

Hezbollah and its allies accuse the U.S. and some Gulf Arab nations of punishing Lebanon because of Hezbollah's military activities in other countries, including Syria and Iraq.

Neighboring Syria has blamed Israel for mysterious attacks that have targeted oil tankers heading from Iran to Syria this past year.

For weeks, Lebanese have been waiting in long lines at petrol stations to fill their tanks. Diesel shortages amid severe power cuts have shut down thousands of private generators, leading to lengthy blackouts and even shortages of bread. Some hospitals have warned that patients could die because of shortages of diesel fuel that powers their generators.

The shortages are blamed on smuggling, hoarding and the cash-strapped Lebanese government’s inability to secure deliveries of imported fuel.

Lebanon has for decades suffered electricity cuts, partly because of widespread corruption and mismanagement. The Mediterranean nation of 6 million — including 1 million Syrian refugees — is near bankruptcy.

The situation deteriorated dramatically last week after the central bank decided to end subsidies for fuel products. The decision will likely lead to a hike in the prices of almost all commodities in Lebanon.

Nasrallah said his group does not aim to “defy anyone,” by arranging the fuel shipment from Iran, but added that “we cannot stand idle amid the humiliation of our people whether in front of bakeries, hospitals, gas stations and darkness at night.”

Hezbollah’s opponents are likely to be angered by Nasrallah's remarks as importing Iranian oil may lead to U.S. sanctions on Lebanon.

On Thursday, Coral, one of the largest fuel companies in Lebanon, said it was running out of gasoline. A tanker that's bringing in supplies has been stuck off the Lebanese coast for eight days because of paperwork, it said. The company warned it won't be able to resupply gas stations for the first time since it was founded.

“I’m trying to find solutions for the Lebanese people, Shea, the U.S. ambassador, told Al Arabiya English. “We’ve been talking to the governments of Egypt, Jordan, the government here (Lebanon), the World Bank. We’re trying to get real, sustainable solutions for Lebanon’s fuel and energy needs.”