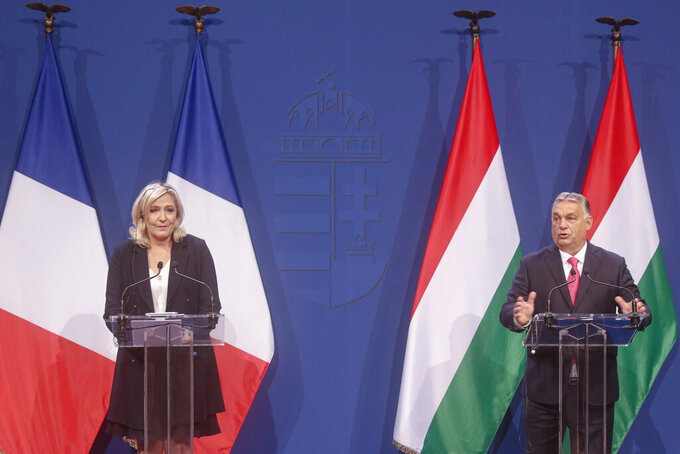 At a news conference in Hungary's capital following the meeting, Le Pen lambasted what she said was emerging “ideological hegemony” in the European Union, and she urged deeper cooperation among nationalist political parties that favor diminishing the EU's power over its member nations.

“We have to have convergence, and this has to be our mode of existence,” Le Pen said.

The visit reflected growing efforts by both Orban and Le Pen to consolidate the European right, including politicians and parties that share their anti-immigration views and opposition to the EU exercising certain legal powers over the bloc's 27 national governments.

Le Pen offered support to Orban in his government’s conflict with the EU, which has accused Hungary of backsliding on essential rule of law commitments like media freedom and the independence of the judiciary. The EU has initiated legal action against Hungary and has yet to approve billions in post-pandemic recovery funds.

“My message to the Hungarians is hold on and keep up,” said Le Pen, who is expected to run in France's presidential election next year. “You are projecting bravery to the nations of Europe and to freedom fighters.”

Le Pen has also extended her support to Poland, which has a similar battle with the bloc. Last week, she met with Polish President Mateusz Morawiecki, a key Orban ally, on the sidelines of an EU summit in Brussels.

After that meeting, Le Pen tweeted that she and the Polish president had discussed the “unacceptable blackmail” of Poland by the EU’s executive commission.

The bloc has accused Warsaw of undermining the independence of the judiciary and is threatening sanctions over Morawiecki’s insistence that Polish law trumps EU law.

But Le Pen on Tuesday emphasized the primacy of national laws, whether they comply with EU rules or not.

“When sanctions are used to threaten people, especially Hungary and Poland, these are all efforts for new types of European hegemony," she said.

Le Pen's meeting last week with Morawiecki shocked many in Poland since the country’s ruling Law and Justice party has long refused to cooperate with the far-right politician over her warm relations with Russian President Vladimir Putin — a sensitive topic in the country that was long dominated by Russian and Soviet rule.

Orban receiving Le Pen in Hungary's capital also represented a pivot from the prime minister's earlier reluctance to be associated with the European far-right. In a 2019 interview for American magazine The Atlantic, Orban firmly ruled out any cooperation with the French politician, saying she was “a red line."

"I have nothing at all to do with Madame Le Pen,” Orban said in the interview.

But at the Tuesday news conference, Orban called Le Pen a “sovereigntist” and praised her for extending support to Hungary in its conflicts with the EU.

He said that Le Pen would be a partner in renewing the European right, and that “this renewal can only happen if we enter into alliances with one another.”

Both politicians are preparing for key elections next spring, with Orban facing the most serious challenge to his power since he took office in 2010.

Le Pen is aiming to unseat French President Emmanuel Macron but facing a potential challenge from rabble-rousing television pundit and author Eric Zemmour, whose anti-Islam and anti-immigration rhetoric has won over some of Le Pen’s base, according to polls.

Orban declined Tuesday to endorse either Le Pen or Zemmour, saying it was a decision for the French people.

Angela Charlton in Paris and Vanessa Gera in Warsaw contributed.