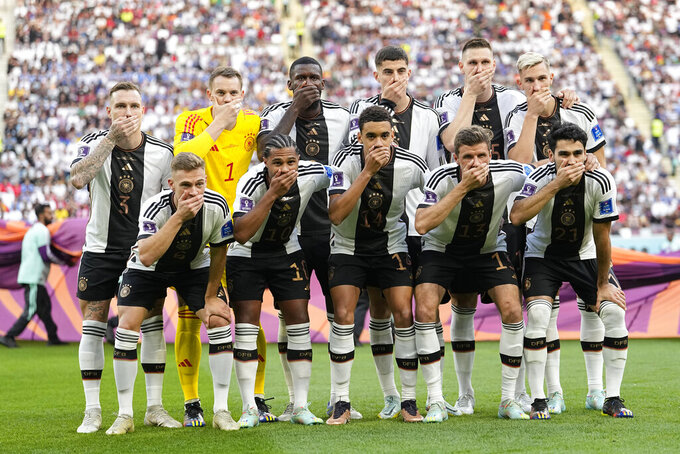 Ebrahim Noroozi, ASSOCIATED PRESS
Players from Germany pose for the team photo as they cover their mouth during the World Cup group E soccer match between Germany and Japan, at the Khalifa International Stadium in Doha, Qatar, Wednesday, Nov. 23, 2022. (AP Photo/Ebrahim Noroozi)

DOHA, Qatar (AP) — Germany's players covered their mouths for the team photo before their opening World Cup match on Wednesday to protest against FIFA following the governing body's clampdown on the “One Love” armband.

The Germany team lined up in the traditional formation before its game against Japan and all 11 players covered their mouths with their right hands in a coordinated gesture.

“It was a sign from the team, from us, that FIFA is muzzling us,” Germany coach Hansi Flick said after the match, which his team lost 2-1.

The gesture was a response to FIFA’s effective nixing of seven European teams' plans to wear armbands that were seen as a rebuke to host nation Qatar and its human rights record.

Team captains, including Germany captain Manuel Neuer, had planned to wear the armband with the heart-shaped, multicolored logo, a symbol for inclusion and diversity. But the seven federations backed down after FIFA made it clear they would face consequences if they did not.

“We may have our bands taken away from us, but we'll never let our voices be taken from us,” Neuer said. “We stand for human rights. That's what we wanted to show. We may have been silenced by FIFA regarding the captain's armbands, but we always stand for our values.”

Neuer said the idea for the mouth-covering gesture came from the team.

“We really wanted to do something and we thought about what we could do," Neuer said. "It was clear that we wanted to send a signal.”

FIFA said Germany will not face disciplinary action for the gesture.

Against Japan, Neuer wore an armband with the FIFA-approved “No Discrimination” slogan, though it was hard to see under the sleeve of his jersey. Neuer said it was too loose and that it kept slipping.

The German soccer federation posted a statement on Twitter during Wednesday's game stating its position.

“With our captain’s armband, we wanted to send a signal for values that we live in the national team: diversity and mutual respect. Being loud together with other nations.

"It’s not a political message: human rights are nonnegotiable. That should be obvious. Unfortunately it still isn’t. That’s why this message is so important to us,” the federation said. "Denying us the armband is like muzzling us. Our stance stands."

Qatar has been under scrutiny for its human rights record and laws criminalizing homosexuality.

FIFA issued its warning to the federations on Monday, hours before England and the Netherlands were set to play with their captains wearing the “One Love” armbands. The governing body said the players would immediately be shown a yellow card and could face further consequences.

German Interior Minister Nancy Faeser, who is also responsible for sports, wore a “One Love” armband in the stands at the Germany game, where she was sitting beside FIFA president Gianni Infantino. Faeser posted a photo of herself on Twitter wearing it with the hashtag #OneLove.

News agency DPA reported that Faeser had the armband on under a pink blazer that she took off during the first half.

Earlier, Faeser criticized Qatar for forcing a German fan to remove a rainbow-colored armband and headband at another game.

“This is not in line with my understanding of the security guarantees that I was given by the (Qatari) interior minister,” Faeser said. “Security must apply to all people. I’m very disappointed about this.”

The rainbow flag is a widely used as a symbol of tolerance with regard to sexual diversity.

Faeser said "such symbols should be openly shown.”

At a later match, Belgian Foreign Minister Hadja Lahbib wore the “One Love” armband when she met with Infantino at her country’s game against Canada. She also posted a photo of herself on Twitter wearing the band.