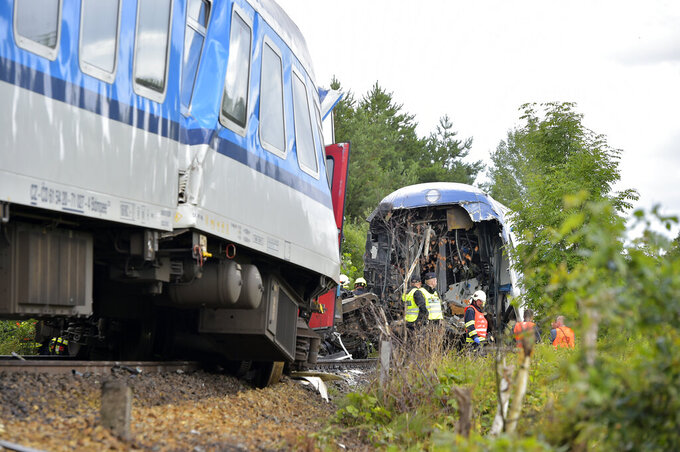 Chaloupka Miroslav, ASSOCIATED PRESS
The Western Express Train collided with a passenger train near the village of Milavce between the stations Domazlice and Blizejov, Czech Republic, Wednesday, Aug. 4, 2021. Two people died in the accident, 38 people were injured, seven of them are in critical condition. (CTK Photo via AP/Miroslav Chaloupka)

PRAGUE (AP) — Two passenger trains collided in the southwest of the Czech Republic on Wednesday, killing three people and injuring dozens of passengers.

Czech Railways said a local passenger train and an international high-speed train that was heading from Munich to the western Czech city of Plzen and the Czech capital of Prague were involved in the collision.

Police said at least three people died in the crash, which occurred shortly after 8 a.m. (0600 GMT) in the town of Milavce. The victims included the the drivers of both engines and a female passenger, authorities said.

Dozens of people were injured, five of them seriously, the Fire Rescue Service of the Plzen region said in a statement. Four helicopters were transporting the injured to nearby hospitals and to Prague, while three German speakers were taken to hospitals in Germany.

The regional rescue service said a total of 52 people needed treatment. Nearby rescuers from Germany came to help their Czech colleagues treat the injured.

Pictures from the site showed the badly damaged front of the high-speed train's engine. The train is operated by Germany’s Laenderbahn company and the Czech Railways.

Czech Transport Minister Karel Havlicek said human error likely caused the crash. He said the driver of the high-speed train had failed to stop at a designated location.

“The situation is serious,” Havlicek said.