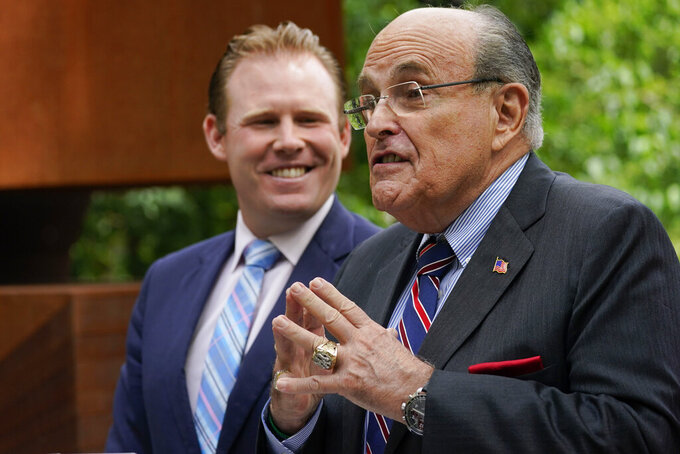 Mary Altaffer, ASSOCIATED PRESS
FILE - Andrew Giuliani, left, a Republican candidate for Governor of New York, is joined by his father, former New York City mayor Rudy Giuliani, during a news conference, June 7, 2022, in New York. One place the former New York City mayor is in high demand these days is on the campaign of his son, Andrew Giuliani, who on Tuesday is hoping to become the Republican nominee for governor of New York. (AP Photo/Mary Altaffer, File)

NEW YORK (AP) — After 2020, Rudy Giuliani is not someone most politicians would summon to hold a news conference on their behalf.

As the frontman of former President Donald Trump’s false claims of election fraud, Giuliani made notorious appearances before cameras where he espoused baseless theories — once while doing an impression of actor Joe Pesci as dark streaks of what appeared to be hair dye ran down his face — and another outside a Philadelphia landscaping company. This past week, his unsupported accusations and the fallout of those claims became the centerpiece of hearings from the House committee investigating the Jan. 6, 2021, riot at the U.S. Capitol.

But one place the former New York City mayor is in high demand these days is on the campaign of his son, Andrew Giuliani, who on Tuesday is hoping to become the Republican nominee for governor of New York.

The campaign is considered a long shot, with the favored U.S. Rep. Lee Zeldin as the presumed front-runner in the Republican race with the endorsements of the state’s GOP and Conservative Party. And in an otherwise favorable year for Republicans, Democratic Gov. Kathy Hochul is expected to win the office in November.

New York is one of the bluest states in the country, where Democrats have more than twice as many registered voters as Republicans and have held the governor's mansion for 15 years. It's also a state where — outside of Republican voters — the only name less popular than “Trump” might be “Giuliani.”

The 36-year-old worked as an aide in Trump’s White House and as a commentator on the conservative network Newsmax, but has never held elected office before.

Before launching his campaign, he had been principally known for appearing, while still a child, next to his father at his 1994 mayoral inauguration. He comically mimicked his father’s gestures and repeated his words, antics that were parodied on “Saturday Night Live” by Chris Farley.

As he campaigns for governor, the younger Giuliani still seems to be doing an imitation of his father. He not only shares some of his mannerisms, but has frequently used his appearances to make false claims about the 2020 presidential election, including falsely stating that Trump won the election.

Andrew Giuliani has also been accused of somewhat conspicuously omitting his first name on his website and campaign materials, perhaps to give the impression among Republicans that his father might the candidate.

“People would say, well with a famous last name, it’s easy to run in politics,” Giuliani said, responding to the criticism during a debate on Newsmax.

“I would tell you with a name like Andrew, it’s very difficult to be the leading candidate for governor in a Republican primary,” Andrew Giuliani quipped, referring to former three-term New York Gov. Andrew Cuomo, a Democrat who resigned in disgrace last year amid sexual harassment allegations.

Andrew Giuliani said he was very proud of his father and called him “New York’s greatest crime fighter.”

He reiterated a law-and-order message on Sunday after his father, while campaigning at a supermarket on Staten Island, was smacked on the back by a man. Rudy Giuliani called for the man to be prosecuted and said “it was hard standing up” after, though video from the New York Post shows the man slapping Giuliani with an open palm and the former mayor turning to look at him.

“The assault on my father, America’s Mayor, was over politics,” his son said. "As governor I will stand up for law and order so that New Yorkers feel safe again.

Before he was known as Trump’s attorney describing unfounded international election plots on television, Rudy Giuliani was hailed a national hero for leading New York City through the wake of the 9/11 terrorist attacks.

He had been a U.S. attorney in New York famous for prosecuting mafia figures and later was a Republican mayor known for tackling crime with his “broken windows” theory of policing. The philosophy involved deterring serious crime by cracking down on minor offenses such as public urination or panhandling window-washers known as “squeegee men.”

Critics said the theory was not effective and targeted minorities, but in his campaign, Andrew Giuliani has called for the return of “broken windows” policing “all around the state of New York.”

Andrew Giuliani has frequently appeared with his father at news conferences, rallies and other campaign events, the two standing side by side behind a podium or in the back of a truck decorated with a “Giuliani” sign. Often they wear red Giuliani campaign hats — a design that evokes Trump’s famous “Make America Great Again” hat.

Though Trump has issued endorsements in primaries around the country, he has not issued one for Giuliani or Zeldin, a staunch ally.

“I think Trump wonders if he would help or hurt," Giuliani mused last week.

Rudy Giuliani has sought to assure people that his son’s experience includes watching his father serve as mayor.

“It is true he was a child during most of my tenure, but I don’t know. Do you consider a 15-, 16-, 17-year-old a child? He worked with me on those things when I was there,” Giuliani said at a news conference on Thursday. “In many of those situations, your candidate Andrew Giuliani has helped me. He knows it backwards and forwards from the time he was a kid.”

In New York, the backing of a political party and its apparatus has in most every case mattered. Zeldin, with his resume and wide support on the right, is expected to win Tuesday, said Thomas Doherty, a political strategist and former aide to New York’s last Republican governor, George Pataki.

Doherty said Andrew Giuliani has name recognition but a thin resume and is not seen as a serious contender.

“I’m sure that whatever votes he gets, he’s getting on the name of his father,” Doherty said. “There’s nothing wrong with that except for the fact that there’s nothing on his resume that says ‘I can be governor of New York.’”

Zeldin made that point during the last GOP debate, derisively referring to Giuliani’s experience in the Trump administration as the “Chick-fil-A runner at the White House outranked by the White House Easter egg bunny.”

Outside of his childhood antics at his father's inauguration, Andrew Giuliani was in the headlines when he sued Duke University in 2008, claiming he had been improperly cut from the golf team. The school said Giuliani’s dismissal was based on bullying behavior, which he denied. His lawsuit was dismissed in 2010.

He worked on Trump’s 2016 presidential campaign and then in the Trump White House. He served as an associate director of the Office of Public Liaison and later as a special assistant to the president.

Rudy Giuliani said his son’s “four years with Trump — that’s like five college educations. He’s much better prepared for this.”

The former mayor acknowledged some will be skeptical of his son and may think he’s too young and inexperienced to be the governor of a state of nearly 20 million people.

“You’re taking a chance. You took a chance on me," the candidate's father said at Thursday's news conference. "The chance is worth it because he’s got that exceptional spirit, Teddy Roosevelt kind of spirit.”