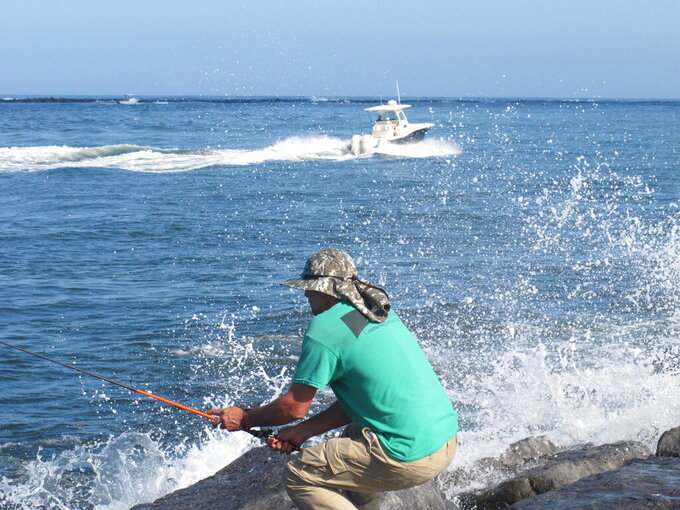 Wayne Parry, ASSOCIATED PRESS
This Sept. 18, 2021 photo shows a fisherman dodging a wave crashing on the rocks of the Barnegat Inlet in Barnegat Light, N.J. The inlet is included in a $16 billion flood control plan that would build storm gates that could slam shut across the waterway, a proposal on which the government is seeking public input. (AP Photo/Wayne Parry)

BARNEGAT LIGHT, N.J. (AP) — A proposed $16 billion billion plan to address back bay flooding, one of the major sources of storm damage at the Jersey Shore, is raising concerns about where water would go during storms, whether barriers proposed as part of it would hinder navigation and the impact it would have on the environment.

During an online hearing Monday night on the project, officials with the U.S. Army Corps of Engineers said it could prevent $1.8 billion worth of storm damage a year when fully constructed.

“It doesn't eliminate all damage, but it will greatly reduce damages,” said Robert Hampson, a hydraulic engineer with the Army Corps.

But officials did not yet have detailed answers on some concerns, particularly environmental ones, noting that the project, which is one of the most ambitious and expensive flood control efforts any U.S. state has yet taken to address back bay flooding, is still in the planning stages.

The proposal calls for construction of huge gates across the mouths of three inlets in New Jersey that could be slammed shut when major storms approach, closable barriers that would cut parts of two bays in half and the elevation of nearly 19,000 homes.

Back bay flooding refers to floods that are not primarily caused by waves crashing over ocean barriers, but by stealthily rising water levels in bays along inland shorelines.

Although ocean waves caused severe damage during Superstorm Sandy in 2012, back bay flooding also caused extensive damage in that storm. In numerous places, it was the primary source of property damage during Sandy.

It also would change the way several iconic spots at the Jersey Shore would look and operate.

When someone asked where all the water diverted by the gates and barriers would go during storms, Hampson said the barriers may cause a temporary increase in water levels near the structures of 6 inches to 1 foot when they are closed.

Brian Williams, who did not identify his hometown in the online meeting, expressed concern about the project's impact on marine life.

“Can you guys inform the native residents of this area you're going to do this: whales, dolphins, fish, birds, crabs?” he asked. “I'm pretty sure they didn't get a notification on their shell phone. And I'm pretty sure they wouldn't approve of this project.”

It calls for large storm gates across the Manasquan, Barnegat and Great Egg Harbor inlets. In addition, so-called “cross-bay barriers” would be erected in Absecon Bay near Atlantic City and along a former railroad right of way that would extend along 52nd Street in Ocean City.

These bay barriers would have a swing gate in the middle that could be shut during major storms, and slat-like gates spanning about a third of a mile that would be lowered down into the water to block surges of water during storms.

Similar barriers have been proposed for waterways in Texas and New York like those already in place along the Mississippi River, the Providence River in Rhode Island, and in Holland, England and Venice, Italy. But other places, including Boston, considered the idea but decided the cost outweighs the benefits.

The plans announced last month by the U.S. Army Corps of Engineers and the state Department of Environmental Protection are just that: plans. There is no guarantee of funding for the massive project, which would run from Neptune in Monmouth County all the way to the state’s southern tip in Cape May.

A second hearing is to be held Tuesday afternoon.