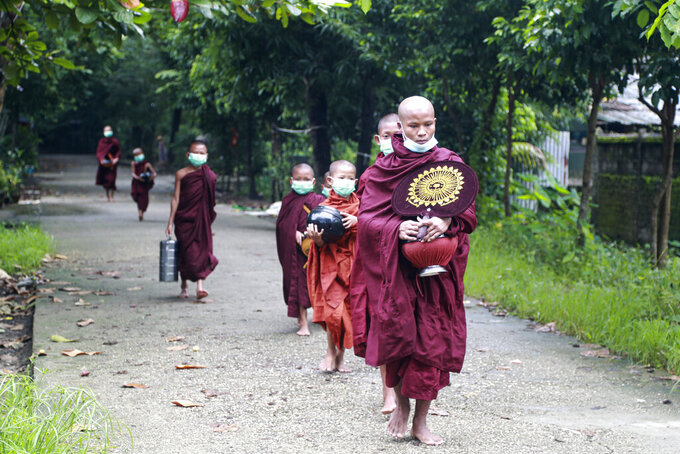 BANGKOK (AP) — A homemade bomb exploded at an office of Myanmar’s state electricity provider on Friday, injuring at least seven people in the latest example of opponents of the military-installed government turning to violence after their peaceful protests were suppressed with deadly force.

State television MRTV reported that four employees of the Electric Power Corp. in Mandalay, the country’s second biggest city, and three other people were injured. Reports from independent media gave slightly different casualty counts and said the injured included customers who had come to pay their bills.

Offices and staff of EPC have been targeted since earlier this month when the government decided to crack down on customers who are not paying their bills by cutting off their service.

Refusing to pay the bills has been a low-key way of participating in the civil disobedience movement against the February military takeover that ousted the elected government of Aung San Suu Kyi.

The disobedience movement urges all forms of non-cooperation with the government, including state workers not turning up for their jobs. But even people who have just shown sympathy with the movement have been fired, and many ministries and state enterprises now have staff shortages.

The opposition became more militant after security forces used deadly force to break up anti-government protests. More than 900 demonstrators and passersby have been killed by police and soldiers according to a detailed accounting by the Assistance Association for Political Prisoners. The government puts the tally at about a third of that and says its use of force was justified to put down rioting and terrorism, and that scores of security personnel have also been killed and wounded.

When the government threatened to cut off electricity, opposition activists hoped the non-payment protest would continue, with people adopting alternatives such as cooking gas, generators and solar panels.

In practice, however, many people felt they could not afford to lose their electricity supply, particularly apartment dwellers who depend on it to power pumps that supply their water.

According to The Irrawaddy, an online news service, at least nine electricity company offices in Yangon, the country’s biggest city, have been attacked, along with offices in Bago Region and Shan state. There have also been reports of company workers attacked in the street.