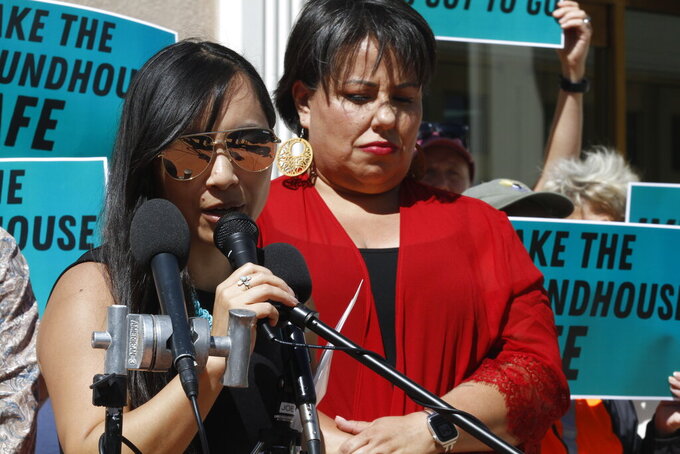 Morgan Lee, ASSOCIATED PRESS
Center for Civil Policy Director Lan Sena, at microphone, and Organizers in the Land of Enchantment Deputy Director Andrea Serrano, right, call on state legislators to make changes that provide safety from sexual harassment and greater accountability at a news conference Monday, Sept. 26, 2022, outside the state Capitol building in Santa Fe, N.M. State legislators in New Mexico are reconsidering how they evaluate complaints of sexual misconduct against colleagues, amid outrage about the handling of a complaint against an influential senator. (AP Photo/Morgan Lee)

SANTA FE, N.M. (AP) — State legislators in New Mexico are reconsidering how they evaluate complaints of sexual misconduct against colleagues, amid outrage about the handling of a complaint against an influential senator.

A panel of leading legislators met Monday to discuss possible changes to ground rules for harassment investigations at the Legislature.

“It has become clear that our anti-harassment policy is not working,” said Democratic state Rep. Daymon Ely of Corrales, co-chairman of a legislative ethics committee. “This is intended to start a discussion.”

Harassment complaints against lawmakers are often assigned for an initial investigation to a panel of four legislators, which may deadlock on a 2-2 vote. Ely proposed the changes that would assign an outside expert to break any tie vote, with public notice of the outcome.

Ely outlined proposals that would remove secrecy provisions that currently prevent people who complain of harassment by legislators from publicly discussing any investigation that has been dismissed without a finding of probable cause.

“How do we fix that so that we have closure for those people?" said Democratic Sen. George Muñoz of Gallup. "It can’t come out in a tie. There has to be closure for both sides.”

Also Monday, a coalition of advocacy groups held a news conference in Santa Fe to describe a “toxic culture” that favors perpetrators over victims of harassment at the Legislature.

Some said an independent authority such as New Mexico’s State Ethics Commission would be better suited to review harassment complaints against legislators — rather than a panel of legislators.

“The current system only supports the perpetrators,” said Lan Sena, policy director for the Center for Civic Policy. “This is a classic case of the fox guarding the hen house.”

Sena reiterated calls for the resignation of Democratic state Sen. Daniel Ivey-Soto of Albuquerque in response to harassment accusations.

Ivey-Soto, a gatekeeper on election legislation, recently announced that a Senate investigation into allegations of sexual harassment against him had been “indefinitely suspended, with no further action to be taken.”

But a leaked report also shows that a special counsel to the investigation concluded there was probable cause to indicate that Ivey-Soto violated anti-harassment policies. And the female lobbyist who leveled accusations of harassment against Ivey-Soto has filed a lawsuit challenging secrecy provisions at the Legislature that prevent her from saying more.

Marianna Anaya’s harassment complaint to the Legislature in February was accompanied by an open letter to the public that accused Ivey-Soto of groping her at a hotel reception in 2015 and of more recent aggressive and disrespectful behavior while discussing proposed legislation over drinks. She called on the lawmaker to resign, as other women say they were harassed by Ivey-Soto.

Ivey-Soto said he has no recollection of touching Anaya during the encounter and that their encounters over the years were never sexual. The Associated Press generally does not identify people alleging sexual assault, but Anaya has been openly public about her allegations and prior advocacy against harassment.

On Saturday, Ivey-Soto was removed from one of his leadership positions on an interim committee in response to harassment allegations.