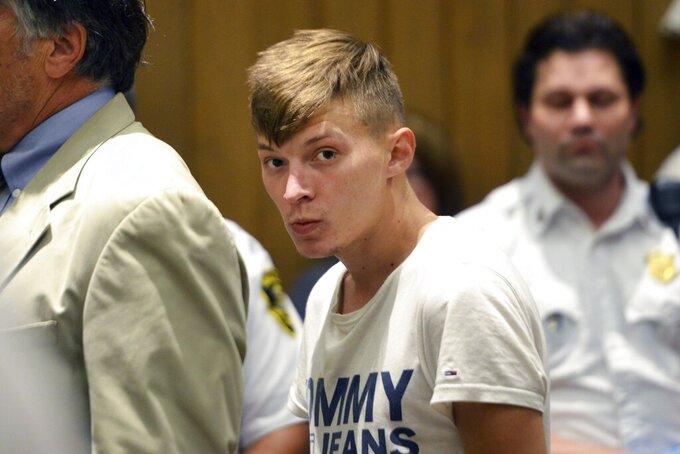 Don Treeger, ASSOCIATED PRESS
FILE - In this June 24, 2019, file photo, Volodymyr Zhukovskyy, of West Springfield, Mass., a truck driver, is arraigned on charges in causing the deaths of seven motorcycle riders, in Springfield, Mass. The New Hampshire Supreme Court has rejected an appeal for a bail hearing for the truck driver who's been in jail since he was charged with causing the deaths of seven motorcyclists in 2019. Twenty-five-year-old Zhukovskyy is scheduled to face trial on Nov. 29, 2021 on multiple counts of negligent homicide, manslaughter, driving under the influence and reckless conduct stemming from the crash that happened in Randolph. He pleaded not guilty. (Don Treeger/The Republican via AP, Pool)

CONCORD, N.H. (AP) — The New Hampshire Supreme Court on Thursday rejected an appeal for a bail hearing for a truck driver who's been in jail since he was charged with causing the deaths of seven motorcyclists in 2019.

Volodymyr Zhukovskyy, 25, of West Springfield, Massachusetts, is scheduled to face trial on Nov. 29 on multiple counts of negligent homicide, manslaughter, driving under the influence and reckless conduct stemming from the crash that happened in Randolph on June 21, 2019. He pleaded not guilty.

The victims, members of the Jarheads Motorcycle Club, were from New Hampshire, Massachusetts and Rhode Island.

A judge denied three requests for a bail hearing, agreeing with prosecutors that Zhukovskyy is a danger to himself and others. After the third denial, in April, Zhukovskyy's lawyers challenged the judge's decision and they said that Zhukovskyy was entitled to a hearing because both sides disputed facts that were relevant to his dangerousness.

Prosecutors argued that the judge was not required to hold a bail hearing under state law nor use any specific method to assess Zhukovskyy's dangerousness. The state Supreme Court agreed, and noted undisputed facts establishing a pattern of reckless behavior.

“The charged offenses are especially indicative of the defendant’s character and the risk of danger he poses given that this is not the first time the defendant has been charged with driving while under the influence," the court wrote.

The justices noted Zhukovskyy's 2014 conviction of operating a vehicle while under the influence of alcohol in Massachusetts, and that he was released on bail in Connecticut on a similar offense at the time of the 2019 crash.

The justices also noted that Zhukovskyy, in court, noted it is “not a secret" that he has a “history of substance abuse" that includes misdemeanor drug possession convictions in 2018 and 2019.

“We are not convinced by the defendant’s argument that the fact that he has been sober while in pretrial detention raises ‘an important doubt’ about whether he is currently dangerous," the court wrote.

“Although commendable, his sobriety while detained in a restrictive environment does not negate the undisputed fact that he allegedly committed the June 21, 2019 offenses while driving under the influence of drugs in violation of release conditions" following his arrest in Connecticut, the court said.

The justices wrote it was reasonable for the judge to conclude “based solely on the undisputed facts, that, because the defendant had failed to lead a law-abiding life free from controlled substances when on conditional release, he is unlikely to do so now."

“Sorry, but we can’t comment on any aspect of the case at this time," Steve Mirkin, one of his public defenders, said in an email.