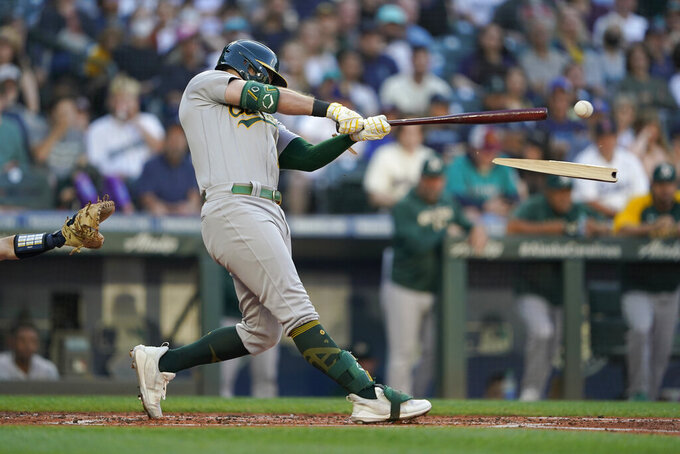 Ted S. Warren, ASSOCIATED PRESS
Oakland Athletics' Seth Brown breaks his bat as he lines out to end the top of the third inning of the team's baseball game against the Seattle Mariners, Friday, July 1, 2022, in Seattle. (AP Photo/Ted S. Warren)

SEATTLE (AP) — Sean Murphy was largely responsible for James Kaprielian finally picking up his first victory of the season on the mound. Both in the game Murphy called behind the plate and what he did with the bat.

Murphy delivered a pair of key two-out hits, including a solo home run, and the Oakland Athletics beat the Seattle Mariners 3-1 on Friday night to snap a four-game losing streak.

Murphy had a two-out RBI single in the fifth inning off Seattle starter Marco Gonzales that scored Tony Kemp to give the A’s a 1-0 lead. He came through two innings later with an opposite field homer off reliever Penn Murfee to extend Oakland's lead to 3-1.

The homer was Murphy’s ninth of the season and the second allowed by Murfee in his 29th appearance. Murphy had a third two-out hit, a double in the ninth inning.

“Just trying to get some up and in middle and put a good swing on it,” Murphy said. “Luckily, I did.”

Kaprielian earned his first victory of the season, keeping Seattle in check for six strong innings. The right-hander allowed one run and three hits, a turnaround from his first two starts this season against Seattle when he allowed seven earned runs on 12 hits over 10 1/3 combined innings.

Kaprielian had not pitched more than 5 2/3 innings in any of his previous 11 starts this season.

“Really encouraging to just see (Kaprielian) just from the body language, the intensity from pitch one,” Oakland manager Mark Kotsay said. “He looked like the (Kaprielian) of old.”

Seattle’s lone run off Kaprielian (1-5) came in the sixth inning when Julio Rodríguez missed a home run by about a foot and settled for a stand-up triple. Rodríguez scored on Jesse Winker’s infield ground out.

The Mariners nearly pulled even but like Rodríguez, Eugenio Suárez didn’t have enough on his drive and settled for a double that bounced off the wall. Suárez was stranded at second when Abraham Toro struck out.

“I’m an intense competitor. I think everyone in this clubhouse knows that and I want the ball,” Kaprielian said. “For me it's a great opportunity that I was able to go out there in the sixth and work through that."

Seattle threatened again in the seventh, loading the bases with two outs. But, reliever Zach Jackson got Winker to hit a deep fly ball that was caught on the warning track by Ramón Laureano in center field.

“You’re banging the ball over the park last night and come back tonight and it's tough to scratch out a hit,” Seattle manager Scott Servais said. “I thought Winker hit the tar out of that ball. He thought he got it.”

Lou Trivino pitched the ninth for his fifth save.

Gonzales (4-9) was knocked around for eight hits, tying a season-high, but limited Oakland to the two runs. Murphy’s RBI single was aided by Gonzales’ only walk of the game. Gonzales has lost three of his last four starts, but has allowed five earned runs combined in those three losses.

“I’m right now just trying to have tunnel vision and just really focus on what I need to do to get better, make the guys around me better,” Gonzales said. “I feel like that’s all we can control.”

Mariners: C Luis Torrens is recovering faster than Servais expected after injuring his left shoulder during last weekend’s brawl with the Angels. Servais said Torrens has not started baseball activity, but has full range of motion in the shoulder and could be in consideration for being activated sometime late next week.

Athletics: RHP Paul Blackburn (6-3, 3.12) is 1-3 with a 5.18 ERA over his past six starts. Blackburn started the season 5-0 with a 1.70 ERA in his first nine outings. Blackburn had a no-decision in his last start, giving up three runs over five innings against the New York Yankees.