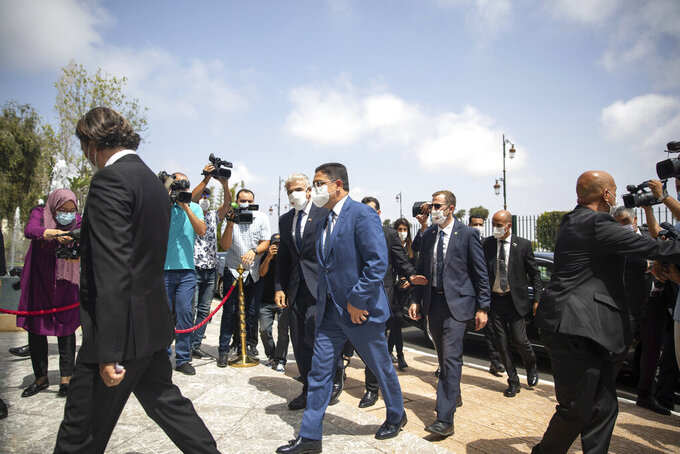 RABAT, Morocco (AP) — Israel’s foreign minister on Thursday inaugurated the country’s diplomatic representation in Morocco, a symbol of the normalization of the relations between the two nations.

Yair Lapid’s two-day visit is the first to the country by an Israeli minister since 2003. It comes less than a year after Israel and Morocco reached a deal to establish formal ties under the U.S.-brokered “Abraham Accords.”

Lapid tweeted photographs of himself formally opening the Israeli liaison office in Rabat, the capital, alongside Morocco's Foreign Affairs Deputy Minister Mohcine Jazouli. He was then to head to Casablanca, where he was to visit a synagogue, the Temple Beth-El.

Israel and Morocco signed an air service agreement and another agreement to cooperate in the fields of culture, sports and youth activities. They also signed a memorandum of understanding on establishing a political consultation mechanism between their countries’ foreign ministries, which appeared to fit into the wider design of the face-to-face diplomacy during Lapid’s visit.

U.S. Secretary of State Antony Blinken tweeted on Wednesday that the United States congratulates Morocco and Israel "on the reopening of the Israeli Liaison Office in Rabat. We will continue to work with Israel and Morocco to strengthen all aspects of our partnerships.”

Israel and Morocco had low-level diplomatic relations in the 1990s, but Morocco cut them off after the second Palestinian uprising erupted in 2000. The two countries maintained informal ties, with thousands of Israelis traveling to Morocco each year.

They shook up the region by upending the long-held belief that Israel could not normalize relations with the broader Arab world without progress in resolving its decades-old conflict with the Palestinians. The Palestinians have rejected the agreements.

As part of the deal to establish formal ties with Israel, the U.S. agreed to recognize Morocco’s claim over the long-disputed Western Sahara region, though the Biden administration has said it will review that decision. Morocco’s 1975 annexation of Western Sahara is not recognized by the United Nations.