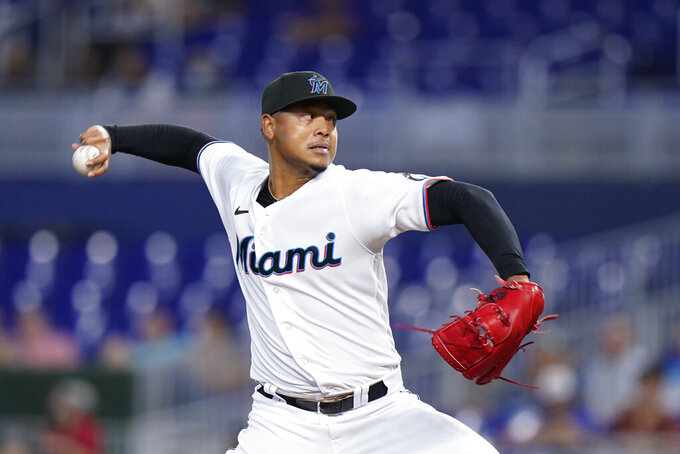 Wilfredo Lee, ASSOCIATED PRESS
FILE -Miami Marlins' Elieser Hernandez delivers a pitch during the first inning of a baseball game against the Atlanta Braves, Wednesday, Oct. 5, 2022, in Miami. With holes to fill on their pitching staff, the New York Mets have acquired right-handers Elieser Hernandez and Jeff Brigham in a trade with the Miami Marlins, Friday, Nov. 18, 2022. (AP Photo/Wilfredo Lee, File)

NEW YORK (AP) — With holes to fill on their pitching staff, the New York Mets acquired right-handers Elieser Hernandez and Jeff Brigham in a trade with the Miami Marlins on Friday.

Miami receives minor league righty Franklin Sanchez and a player to be named or cash.

In four big league seasons with Miami, Brigham is 3-7 with a 4.52 ERA and two saves. He has appeared in 53 games, making four starts.

Both pitchers are eligible for arbitration this winter.

The 23-year-old Woods made his major league debut this season, throwing two shutout innings in two outings for the Braves. He was 2-9 with a 4.60 ERA in 59 games (18 starts) over four minor league seasons in Atlanta's organization.

All three newcomers offer depth as the Mets rebuild their pitching staff following a playoff loss to San Diego in the wild-card round.

Ahead of Friday night's deadline, the Mets chose not to offer 2023 contracts to Smith and Reid-Foley. Both now become free agents.

Smith had a terrific year at the plate during the pandemic-shortened 2020 season but has struggled since and was demoted to Triple-A this year. He batted .194 with no homers and a paltry .560 OPS in 58 major league games this season while earning a $3.95 million salary. He would have been eligible for arbitration again.

Reid-Foley is recovering from Tommy John surgery in May and likely will miss at least the beginning of next season. The right-hander had a 5.40 ERA in seven appearances this year before injuring his pitching elbow.