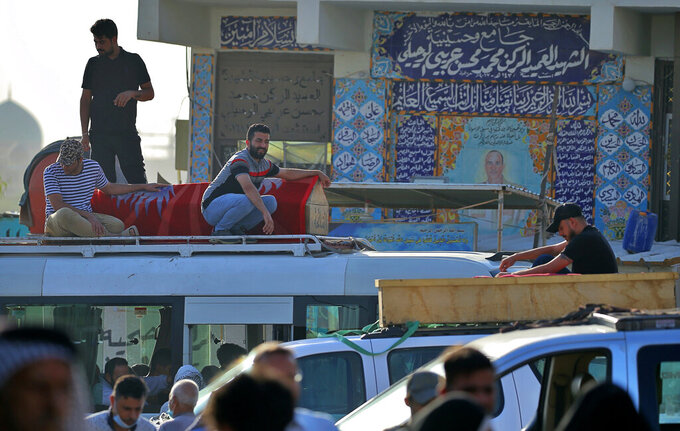 Anmar Khalil, ASSOCIATED PRESS
Mourners accompany victims of a Monday bombing at a Baghdad market that was busy with shoppers a day before the Muslim Eid al-Adha holiday, before their burial in Najaf, Iraq, Tuesday, July 20, 2021. ​Iraqi medical officials said the Monday bomb attack in Sadr City, a Baghdad suburb, killed at least 30 people and wounded dozens of others. (AP Photo/Anmar Khalil)

BAGHDAD (AP) — Families laid to rest loved ones Tuesday who were killed in a deadly bombing that claimed at least 30 lives just hours earlier in a busy market in Iraq's capital.

Coffins were carried by relatives and placed on minibuses that transported them for burial. The funerals were held for the victims of the blast the night before in a crowded market in Sadr City, a Baghdad suburb.

Iraq's military said it concluded an investigation into the bombing and found it was caused by a suicide bomber who detonated an explosives-filled vest in the middle of a popular market. Iraqi security officials initially said the attack was caused by a roadside bomb.

The military said in a statement that at least 50 people were wounded in the attack. It was the third time that militants targeted Sadr City this year.

The Islamic State group claimed responsibility for the attack and said in a statement posted online the bombing was carried out by Abu Hamza al-Iraqi.

The attack occurred a day before the Eid al-Adha holiday when many residents were out shopping for gifts. New clothes are typically given during the holiday.

Hussein al-Lami laid to rest his 12-year-old nephews Murtada and Amir Sahi the night before, soon after they were killed in the attack.

“The calamity was huge, especially for the parents and relatives of the two martyrs,” he said. “Today, Iraqis are spending Eid with calamity after they suffered in this terrorist act. Now there is misery in every Iraqi house."

In June, 15 people were wounded when a bomb placed under a kiosk in another Sadr City market detonated. In April, at least four people were killed in a car bomb attack in Sadr City. That blast was caused by an explosive device attached to a parked car at the market.

Large bomb attacks, once an almost daily occurrence in Baghdad, have slowed in recent years since IS was defeated on the battlefield in 2017.

At the Vatican, the pope expressed his deep sadness at the loss of life in the explosion Monday, according to the text of a telegram sent in his name to the papal envoy in Iraq.

Francis “sends condolences to the families and friends of those who have died,” the Vatican said Tuesday evening. Francis also “renews his fervent prayers that no act of violence will diminish the efforts of those who strive to promote reconciliation and peace in Iraq."

The pontiff made a pilgrimage to Iraq in March that stressed peaceful coexistence in the country.