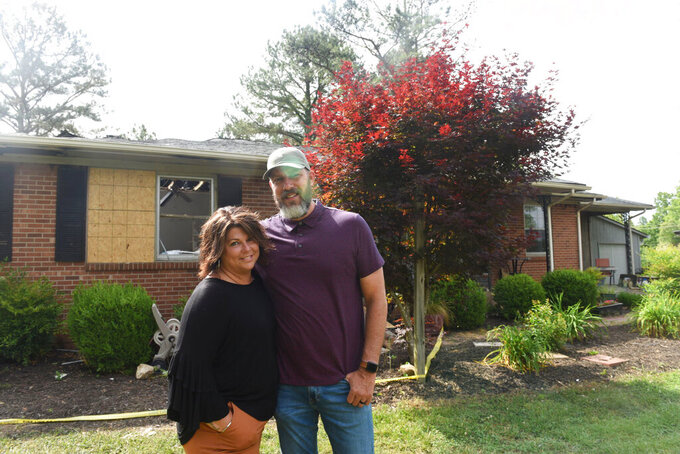 John R. Crane, ASSOCIATED PRESS
Jackie and Jeff Lynch have been overwhelmed with support and donations from their church and the community since a May 25 fire damaged their home, seen Thursday, June 3, 2021, in Danville, Va. The couple, who have been married since 2015, are co-pastors at Compassion Church on Third Avenue in Danville. (John R. Crane/Danville Register & Bee via AP)

DANVILLE, Va. (AP) — Jeff Lynch had just finished mowing the grass and was talking to his mom on the phone when he saw smoke in front of the house.

“When I got up and looked, smoke was pouring out of the back of the house,” Lynch said during an interview in front of the home last Thursday morning on Olde Hunting Trail off Mount Cross Road where he and his family live.

Flames were coming out of a shed attached to the back of the house, he said. It was right after dinner and he and his family were in the home.

“I ran in and told them the house is on fire, you’ve got to get out,” he said. “The flames were flying.”

“By the time I got the water hose hooked up, I couldn’t even get to the fire, it was so hot,” he said.

The fire was caused by the lawn mower that backfired in the shed, sparking the blaze, said Jeff’s wife, Jackie Lynch.

Since the May 25 fire that heavily damaged the home he shares with Jackie, her 86-year-old mother and their five children from previous marriages, their church and other community members have showered them with food, clothes, money, cards and emotional support.

Jeff and Jackie Lynch, who have been married since 2015, are co-pastors at Compassion Church on Third Avenue in Danville.

“People have helped us tremendously,” said Jeff, who has lived in the home since 2017.

At just that moment during the interview, a woman driving by shouted from her car, “Love you guys!”

For Jackie, who grew up in the two-story, ranch-style home built by her parents in 1974, the past several days have been especially emotional.

“This house was always, for me, a safe haven,” Jackie said. “It was always stable.”

The home has also held a special place in the hearts of her kids, who would bring their friends to the home to hang out.

“My kids didn’t go to other people’s houses,” she said. “They always came here.”

On the front of the home, some windows were boarded up while a mattress, ceiling fan and other debris could be seen piled up through another, with backyard trees and the sky visible.

Yellow tape and debris littered the front porch. Inside, insulation and studs were visible amid the destruction, where part of the roof was gone.

But amid the devastation, some family treasures — including Bibles, old love letters written by Jackie’s father to her mom, Jackie’s son’s college degree from George Mason University and Jeff’s baseball cards — were spared, Jackie said.

The Lynches, Jackie’s mother and five of their children are staying at a friend’s home in south Danville. For all the damage their Olde Hunting Trail home, the house is salvageable and should be repaired in about four to six months, Jeff said.

Patty Johnson, who has been a member of Compassion Church for five years, is letting the Lynches and their family stay at her home while she is working in Montana.

For Johnson and the Lynches, the arrangement was fortuitous.

Johnson had just gotten off the phone with Jackie on May 25 when Johnson got a call from her employer, Oklahoma-based Hope Center Ministries, asking her to work for several weeks in Montana. Just minutes later, a mutual friend called Johnson telling her that the Lynches’ home was on fire.

At first, Johnson didn’t believe it since she had just finished talking to Jackie.

“I said, ‘No it is not. I just got off the phone with her, everything is fine,’” she recalled.

But when she called Jackie, she found out it was no joke.

“I jumped up and took off over there,” said Johnson, who had recently let Jackie’s mother, who has dementia, stay with her while the Lynches went on vacation.

When Johnson arrived at the home after enduring diverted traffic, she ran up to Jackie’s mother and hugged her. But she didn’t recognize Johnson at first.

When Johnson reminded her, Jackie’s mother said, “Patty, Patty, Patty, everything I own is in that house,” Johnson said.

“I just held her,” she said. “You could see the roof falling through the window.”

Angela Fitzgerald, chief accountability officer at Compassion Church, recalled the Facetime call she had with Jackie and one of the Lynches’ grandchildren just about 10 or 15 minutes before the fire.

“It was surreal,” Fitzgerald said. “The youngest granddaughter, she had just sang ‘Twinkle, Twinkle Little Star.’”

Within an hour, dozens of people from the church were at the scene to comfort the Lynches, said Fitzgerald, who drove to their home from where she lives in Gretna.

“People were showing up with coolers of water,” she said. “It was just amazing.”

The next day, Fitzgerald was inundated with calls from people wanting to know how they could help. A “meal train” was set up through June 12 that provided food for the Lynches “so that family does not have to worry about feeding themselves so they can concentrate on what’s going on at the moment,” she said.

“A meal train is an opportunity for people to bring food,” she said, adding that enough clothes have been offered to the Lynches to fill a tractor-trailer truck.

Gift cards are the preferred way to donate, Fitzgerald said. They can be sent to Compassion Church Danville at 215 Third Ave. Danville, VA 24540.

“It has absolutely been a devastating disaster to us, but the love people have shown us...” Jeff Lynch said.

For Jeff, the home has been a place where their grandchildren have played and made memories. The couple is looking forward to the day when they can move back in and make more.

“We’re excited about what it will be when it’s put back together,” Jackie said.