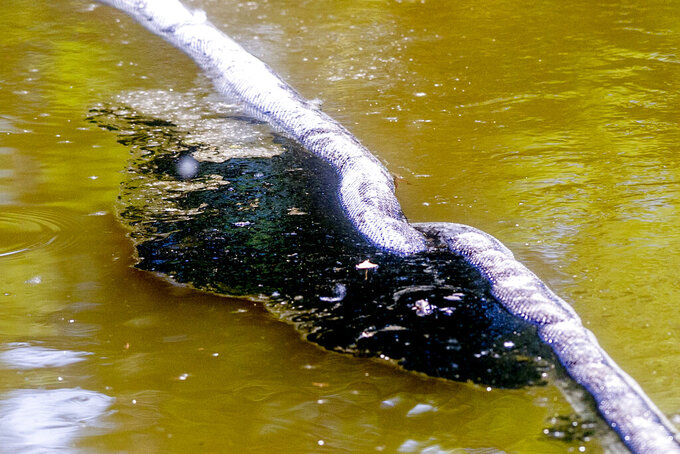 Jake May, ASSOCIATED PRESS
City, Genesee County and state of Michigan agencies are responding to a significant oil spill in the Flint River. Officials for the Michigan Department of Environment, Great Lakes, and Energy said the spill, estimated at several thousand gallons, was reported to a state hotline at 8:15 a.m. Wednesday, June 15. Hugh McDiarmid, an EGLE spokesman, said state environmental officials and local emergency responders are in the area of the spill -- James P. Cole Boulevard and I-475 -- and have begun to deploy a boom across the river in an effort to absorb the material. (Jake May/The Flint Journal via AP)

FLINT, Mich. (AP) — State regulators on Monday ordered a Flint chemical company to truck wastewater to a water treatment plant, weeks after it was blamed for an oily discharge in the Flint River.

The 11-page order describes disputes between Lockhart Chemical and the Department of Environment, Great Lakes and Energy. The state said the company has a “long-running history” of failing to comply with environmental laws.

“This company was given multiple opportunities to fix the problems at their facility and they refused. Now they must face the consequences,” Attorney General Dana Nessel said.

The state said breaches in the system have resulted in wastewater leaks, which enter Flint’s storm sewers and discharge pollution to the Flint River. The company has underground tunnels and an open trench.

“The system is structurally unsound,” the order states.

A spill of oily material into the river was reported on June 15. Investigators subsequently discovered more wastewater infiltrating the storm sewer that leads to the river, the state said, especially after significant rain.

Flint’s drinking water has not been threatened. Flint used the river for drinking water in 2014-15 before lead contamination caused the city to return to Lake Huron water provided by a regional supplier.