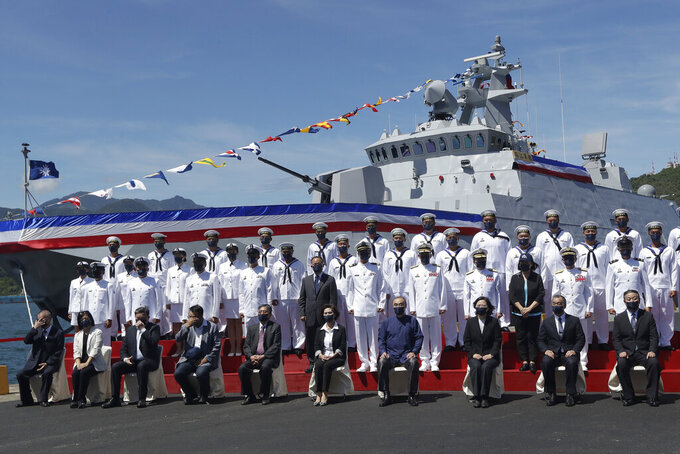 Chiang Ying-ying, ASSOCIATED PRESS
Taiwan's President Tsai Ing-wen, third from right, takes group photo with officers during the commissioning ceremony of the the domestically made Ta Jiang warship at the Suao naval base in Yilan county, Taiwan, Thursday, Sept. 9, 2021. Taiwan's president oversaw the commissioning of the new domestically made navy warship Thursday as part of the island's plan to boost indigenous defense capacity amid heightened tensions with China. (AP Photo/Chiang Ying-ying)

SU'AO, Taiwan (AP) — Taiwan's president oversaw the commissioning of a new domestically made navy warship Thursday as part of the island's plan to boost indigenous defense capacity amid heightened tensions with China.

President Tsai Ing-wen spoke at a naval base in Su'ao, on the island's east coast, saying the ship “proves that on the path to becoming independent in national defense, no matter what difficulties arise, we can overcome them one by one.”

The ship known as the Ta Jiang and nicknamed a “carrier killer” was built by Lung Teh Shipbuilding Co., a Taiwanese company. The ship is designed to have air defense capabilities and can carry anti-ship missiles.

It is the first of six of its kind that will be commissioned by the navy.

Tsai has made boosting Taiwan's domestic defense industry a priority. She has pushed the military aviation industry with the production of new trainer jets and called for the development of more sophisticated systems by utilizing the island’s high-tech industries.

In addition, Taiwan is currently producing its own submarine after four years of research and design. It decided to built its own after Beijing successfully prevented it from purchasing such craft from abroad in recent years through the use of economic and diplomatic threats.

China claims Taiwan is a part of its national territory, although the two have functioned independently since a civil war in 1949. Beijing has publicly said it seeks “peaceful reunification” with Taiwan.

China's Foreign Ministry spokesman Zhao Lijian noted Tsai's commissioning of the warship, saying “there is no way out for Taiwan’s separatist forces to use military means to confront the mainland.”

In the past few years, Taiwan has faced increasing harassment from Beijing, which has sent fighter jets flying towards the island on a near daily basis.

In August, the PLA conducted live assault drills with a squad of fighter jets, anti-submarine aircraft and combat ships.