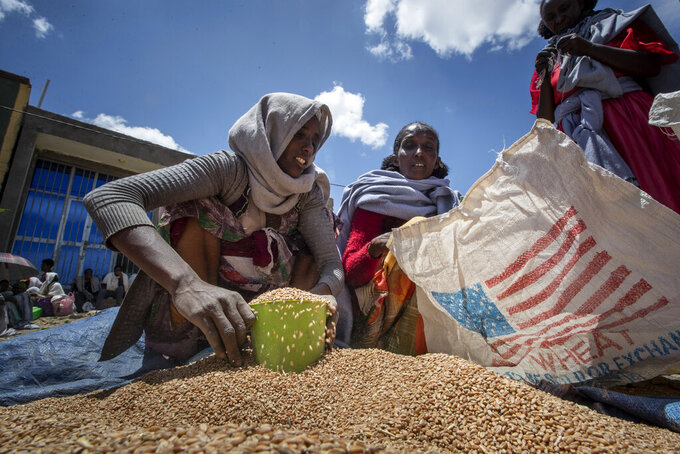 Ben Curtis, ASSOCIATED PRESS
FILE - In this Saturday, May 8, 2021 file photo, an Ethiopian woman scoops up portions of wheat to be allocated to each waiting family after it was distributed by the Relief Society of Tigray in the town of Agula, in the Tigray region of northern Ethiopia. The United States warned late Thursday, Aug. 19, 2021 that food aid will run out this week for millions of hungry people under a blockade imposed by Ethiopia's government on the embattled Tigray region. (AP Photo/Ben Curtis, File)

NAIROBI, Kenya (AP) — The United States is warning that food aid will run out this week for millions of hungry people under a blockade imposed by Ethiopia’s government on the embattled Tigray region.

Samantha Power, the administrator of the U.S. Agency for International Development, said in a statement late Thursday that less than 7% of the needed food aid has been reaching the Tigray region of some 6 million people, and USAID and other aid groups “have depleted their stores of food items warehoused in Tigray” after nine months of war.

“This shortage is not because food is unavailable, but because the Ethiopian government is obstructing humanitarian aid and personnel, including land convoys and air access,” she said. USAID has warned that up to 900,000 people in Tigray face famine conditions in what has been called the world’s worst hunger crisis in a decade. The Associated Press has reported that scores of people have starved to death.

Ethiopia’s government, on the defensive after resurgent Tigray forces retook much of the region in June, has accused humanitarian workers of arming and supporting the fighters, and aid workers have described intense searches and confiscation of personal medication, cash and communications equipment as they try to enter the region on rare convoys or flights. The government also suspended the operations of Doctors Without Borders’ Dutch section and the Norwegian Refugee Council, accusing them of spreading “misinformation.”

A spokeswoman for Ethiopian Prime Minister Abiy Ahmed, Billene Seyoum, rejected Power's allegations: “That is not the case.” Security is the top priority and there will be “continuous checks and processes” for aid entering Tigray, and any “hiccups” are discussed with affected partners, she told reporters on Friday.

Power’s remarks came shortly after United Nations Secretary-General Antonio Guterres told reporters that humanitarian conditions in Ethiopia are now “hellish.” On Friday a U.N. humanitarian spokesman, Saviano Abreu, told the AP that if the current situation continues, it poses an “imminent threat” to the lives of hundreds of thousands of people facing famine.

Guterres called for an immediate cease-fire, unrestricted aid access, the return of basic services and the creation of conditions for an Ethiopian-led dialogue.

Dialogue is highly unlikely. Ethiopia’s government this year declared the Tigray People’s Liberation Front, which dominated the country’s government for 27 years before Abiy came to power, a terrorist group after a political fallout turned into fighting. Asked about a peace process, the prime minister's spokeswoman said the unilateral cease-fire that Ethiopia's government declared as its forces retreated from Tigray in June was an “olive branch that the TPLF refused to accept.”

“The TPLF’s offensive into other regions will only prolong this conflict and the suffering of the Ethiopian people,” Power said, also urging the Amhara regional government to withdraw its forces from western Tigray and neighboring Eritrea to remove its forces from Ethiopia permanently.

Caught in the middle are civilians. Thousands have died.

An aid worker who recently visited the Tigray region told the AP that conditions are so dire, and resources so constrained, that at least one large aid group’s staffers had been forced to begin rationing their own food, let alone have enough means to help others.

With bank services still cut off along with telephone and internet access, aid groups are running out of money, the aid worker said. And while access inside Tigray is safer and easier than before the turn in the war in June, fuel is in such short supply that it’s only available on the black market and diesel prices are five times higher than before, the aid worker said, speaking on condition of anonymity for fear of retaliation.

If the cash and fuel shortages can’t be resolved, aid work “will grind to a halt,” the aid worker said, adding that some groups already had stopped some work altogether.

While the aid worker saw shops stocked with supplies, many people didn’t have the means to buy them. “One definition of famine is not a lack of food, it’s the lack of access to food,” the aid worker said, adding that farmers had largely missed the crucial planting season.

The latest U.N. humanitarian update on Tigray, released on Thursday, said 100 trucks of supplies — 90 of them with food — must enter Tigray every day to help meet the needs of more than 5 million people. But just 316 trucks had entered the region between July 12 and last Sunday.

Now hundreds of thousands of people have been displaced in Amhara and Afar, creating a new humanitarian crisis. Abiy's spokeswoman accused the Tigray forces of indiscriminate shelling and the destruction of hospitals there. Spokesman for the Tigray forces Getachew Reda has denied targeting civilians.