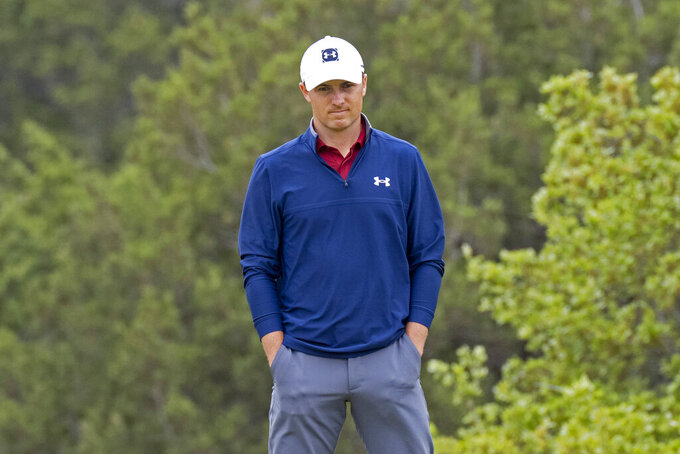 Michael Thomas, ASSOCIATED PRESS
FILE - Jordan Spieth waits his turn to putt during the third round of the Valero Texas Open golf tournament in San Antonio, in this Saturday, April 3, 2021, file photo. Spieth will try to complete the career Grand Slam next week at the PGA Championship. (AP Photo/Michael Thomas, File)

Last year: Collin Morikawa hit driver to 7 feet for eagle on the par-4 16th hole at Harding Park and closed with a 6-under 64 for a two-shot victory over Dustin Johnson and Paul Casey to capture his first major. The PGA Championship was postponed nearly three months because of the COVID-19 pandemic, and it was the first major championship held with no spectators allowed on the course.

Grand Slam: Jordan Spieth needs to win the PGA Championship to become the sixth player to capture the career Grand Slam. He has not finished in the top 10 in the previous four PGAs when he had a chance to complete the slam.

Kiawah Island history: The Ocean Course was designed by Pete and Alice Dye and is most famous for hosting the 1991 Ryder Cup that was dubbed “War on the Shore.” It also hosted the World Cup of Golf in 1997 (Padraig Harrington and Paul McGinley) and 2003 (Trevor Immelman and Rory Sabbatini), before the PGA Championship that was won by Rory McIlroy in 2012.

100 years ago: Walter Hagen won the first of his five PGA Championship titles with a 3-and-2 victory over U.S. Open champion Jim Barnes at Inwood Country Club in New York.

Noteworthy: The top 60 in the world after the PGA Championship will be exempt into the U.S. Open.

Key statistic: Americans have won 17 of the last 24 majors, including the last five at the PGA Championship.

Quoteworthy: “This is obviously a huge confidence boost going in there knowing that my game is closer than it has been.” — Rory McIlroy on winning his final start before the PGA Championship at Kiawah Island. He has not won a major in nearly seven years.