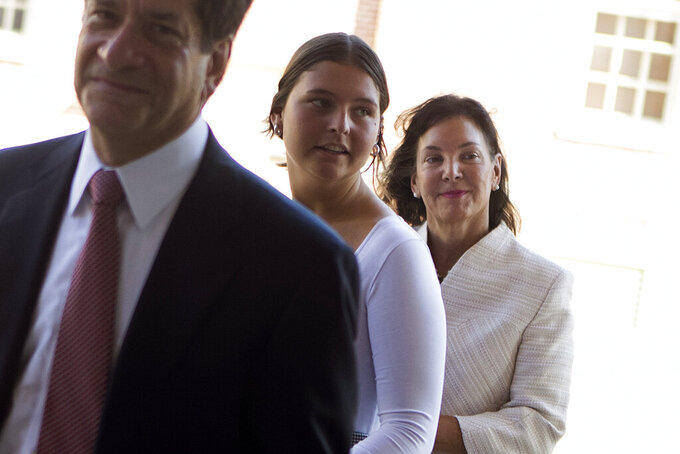 Jerry Habraken, ASSOCIATED PRESS
Delaware State Auditor Kathy McGuiness, right, arrives at the Kent County Courthouse with her daughter Saylar McGuiness, center, Thursday, June 30, 2022 in Dover, Del. A jury returned a mixed verdict Friday in the corruption trial of McGuiness, acquitting her of felony charges but finding her guilty of three misdemeanors. McGuiness, a Democrat elected in 2018, is the first statewide elected official in Delaware to be prosecuted while in office. (Jerry Habraken/The News Journal via AP)

DOVER, Del. (AP) — The jury in the corruption trial of Delaware State Auditor Kathy McGuiness acquitted her on Friday of felony charges of theft and witness intimidation but found her guilty on three misdemeanor counts.

Jurors deliberated for about four hours over two days before finding McGuiness, a Democrat elected in 2018, guilty of conflict of interest, official misconduct and structuring a contract with a consulting firm to avoid compliance with state procurement rules.

It marks the first time in Delaware history that a sitting statewide elected official has been convicted on criminal charges.

Even though fellow Democrats quickly called on her to resign, the misdemeanor convictions don't prevent McGuiness from holding public office, and she said she still plans to seek reelection in November.

The conflict of interest charge involved the May 2020 hiring of McGuiness’s daughter, Elizabeth “Saylar” McGuiness, who still works for the auditor’s office. Prosecutors alleged that Saylar McGuiness, 20, was hired even as other part-time workers in the auditor’s office left because of a lack of work during the early stages of the coronavirus pandemic. Authorities said McGuiness then allowed her daughter special privileges, including access to a state vehicle and permission to work remotely while away at college in South Carolina, that were not available to other “casual-seasonal” workers.

The jury rejected the prosecution’s claim that, by exercising control over state funds used to pay Saylar McGuiness, and having access to their joint bank account, Kathy McGuiness committed felony theft. Jurors also acquitted her on a felony charge of intimidating and harassing employees who she suspected might be cooperating in an investigation of her office.

McGuiness was convicted, however, of structuring payments under a no-bid communications services contract with My Campaign Group, a consulting firm she had used in a 2016 campaign for lieutenant governor, to avoid having to get them approved by the state Division of Accounting.

The structuring and conflict of interest convictions laid the foundation for jurors to also find McGuiness guilty of official misconduct. Each of the three misdemeanor charges carries a maximum penalty of one year in prison, but a presumptive sentence of probation. No sentencing date has been set.

“I will say I believe it’s political,” McGuiness said when asked why she found herself in court.

Both McGuiness and Democratic Attorney Kathleen Jennings have been mentioned as possible gubernatorial candidates in 2024.

“From the moment I took office, I promised that no one would be either above the law or beneath justice,” Jennings said in a prepared statement. “Today’s guilty verdict confirmed that.”

Defense attorney Steve Wood said he would refile a motion for acquittal on all charges or, alternatively, ask for a new trial. He said Superior Court Judge William Carpenter Jr. made “multiple erroneous decisions” during and in advance of the trial.

“The state engaged in multiple acts of discovery misconduct which the court agreed with, but then failed to impose any kind of a meaningful sanction. The crime of structuring as defined by the court we have argued, and will argue again, is contrary to the way the crime is defined in Delaware law,” Wood said.

“Along the way, we repeatedly objected to evidence that we thought is nothing other than inadmissible and unfair character evidence,” he added.

As state auditor, McGuiness is responsible for rooting out government fraud, waste and abuse. Instead of protecting the public from such misconduct, McGuiness engaged in it, prosecutor Mark Denney told jurors in closing arguments.

“Kathy McGuiness knew just how to play the system, and she did,” he said.

Wood, meanwhile, noted that chief investigator Franklin Robinson repeatedly made false statements in a search warrant affidavit and grand jury testimony, despite seeing documents with contradicting information. Wood told jurors the prosecution’s investigation was “incomplete, incompetent and biased from the very beginning,” and spurred by complaints from disgruntled employees as McGuiness tried to make changes in her office following her predecessor’s 30-year tenure.

“We had some bumps along the way. ... Change is very difficult for some folks,” McGuiness said. “I wanted to make that office relevant again, because I can tell you that most people don’t even know we have a state auditor and what we do.”

Following the verdict, Democratic leaders in the state Senate called on McGuiness to resign immediately, having previously urged her to take a leave of absence pending her trial.

“Any public official engaged in these behaviors is unfit for public office, but especially the state’s top financial watchdog,” the lawmakers said.

The misdemeanor convictions, however, do not disqualify McGuiness from holding office.

In October, just days before McGuiness was indicted, the Delaware Supreme Court overturned a judge’s ruling that a small-town police chief who had been convicted of official misconduct was guilty of an “infamous crime” under Delaware’s constitution, and therefore unable to serve as a town commissioner. The judge’s ruling came in response to a petition by Jennings seeking to nullify Michael Capriglione’s election as a Newport town commissioner.

The Supreme Court determined, however, that only felonies can be disqualifying “infamous” crimes.