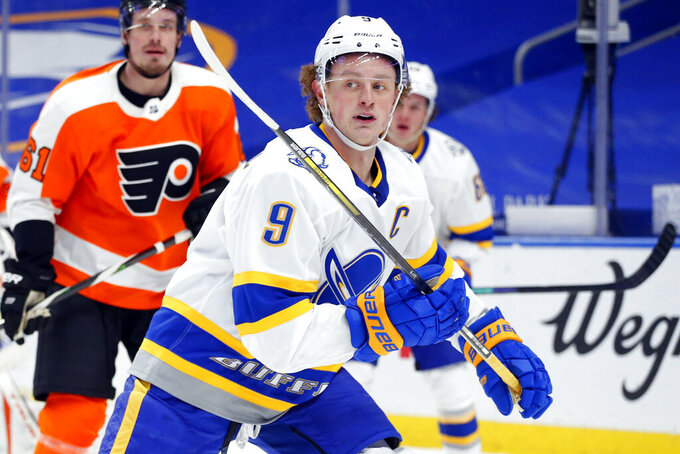 Jeffrey T. Barnes, ASSOCIATED PRESS
FILE - Buffalo Sabres forward Jack Eichel (9) is shown during the second period of an NHL hockey game against the Philadelphia Flyers in Buffalo, N.Y., on, Feb. 28, 2021, file photo. The Eichel era in Buffalo ended when the former face of the franchise was traded to Vegas. (AP Photo/Jeffrey T. Barnes, File)

BUFFALO, N.Y. (AP) — The Buffalo Sabres had just completed a pregame meeting and veteran forward Kyle Okposo was struck by what he noticed once the coaches left the room.

Rather than head their separate ways, most players stuck around to chat. Without referencing how things went in the past, Okposo was making a clear point about the current — post-Jack Eichel — makeup of the Sabres and the bonds being formed among a group of developing youngsters and journeymen.

“We all truly enjoy being around each other. And that’s a really special thing when you’re in the NHL, because it doesn’t happen everywhere,” Okposo said.

The moment made him reflect to his youth hockey days of teammates always hanging out together and playing mini-sticks in arena hallways.

“This is the grown-up version of that,” he said. “I think we have a team in there and we have guys in there who truly care about each other. And our whole thing is happening the way it’s supposed to. And I’m really excited about our future.”

The Eichel era in Buffalo officially ended on Nov. 4, when the former face of the franchise was traded to Vegas. In reality, the players who remained in Buffalo had moved on from their deposed captain long before then.

It was nothing personal, said Okposo, who maintains close ties to Eichel. It was a matter of having to look forward, start fresh and have this group of players develop, as he put it, organically and “write their own chapters.”

There is plenty of blame to go around for how Eichel’s six seasons in Buffalo proved a failure.

There were questionable trades and high-priced signings with no vision toward developing team culture by instead allowing cliques to form among players. There was the decision to thrust Eichel into the role of captain, perhaps before he was ready for the responsibility.

Add it up, and the Sabres’ decision to essentially tank the 2014-15 season for a shot to draft either Connor McDavid or Eichel led to Buffalo finishing last in the standings four times and 10 seasons without a playoff appearance to match the NHL’s longest drought.

With Eichel gone, along with the offseason departures of forward Sam Reinhart and defenseman Rasmus Ristolainen, the Sabres can start new with a core of youngsters and a first-time NHL head coach in Don Granato with a track record of player development.

In replacing Ralph Krueger in March and Buffalo in the midst of an 18-game winless streak, Granato has insisted the team play without fear of making mistakes and a focus on staying on the attack.

Too often, Granato said, players are accustomed to playing in fear a miscue will lead to being benched. Granato has removed that threat while acknowledging it takes time for players to recalibrate.

It’s a philosophy and a system built with an eye on the future in hopes that players gain confidence through experience.

At 7-6-2, the Sabres are off to a better start than expected, while enduring the tell-tale peaks and valleys of a team seeking its identity. And they’ve been competitive despite missing four key players to injury, plus forward Alex Tuch, who was acquired in the Eichel trade but remains sidelined through January with a shoulder injury.

Granato has emphasized staying in the moment, but allowed himself an opportunity to depart from his message in assessing whether the Sabres had pinned a franchise’s hopes on one player.

“I think moving forward, there’s more concern for me in the players we got. We’re extremely excited about what we got back. But nobody’s our savior,” Granato said. “Nobody has to come in here being a savior. Maybe that’s been the challenge of the past.”

Matt Duchene has rediscovered his groove in his third season with the Nashville Predators. With nine goals — three of them game-winners — and seven assists, he’s just the fourth player in franchise history to have 16 or more points through the first 15 games of a season.

He’s already surpassed last year’s totals, when he had six goals and 13 points in 34 games. And Duchene’s burst in production coincides with the Predators going 8-1-1 after an 1-4 start. All but one assist came during the 10-game run.

“I really haven’t changed anything in terms of my approach, my mentality,” Duchene said, after scoring the decisive goal in a 4-3 overtime win at St. Louis last week.

The 13-year NHL veteran is a nine-time 20-goal-scorer who signed a seven-year, $56 million deal with Nashville in free agency in 2019.

“He’s faster this year, much more competitive on the puck,” Hynes said.

Coming off a 5-2 win over Edmonton at Winnipeg on Tuesday, the Jets visit the Oilers to complete a home-and-away series on Thursday night between two of Canada’s top three Western Conference teams.