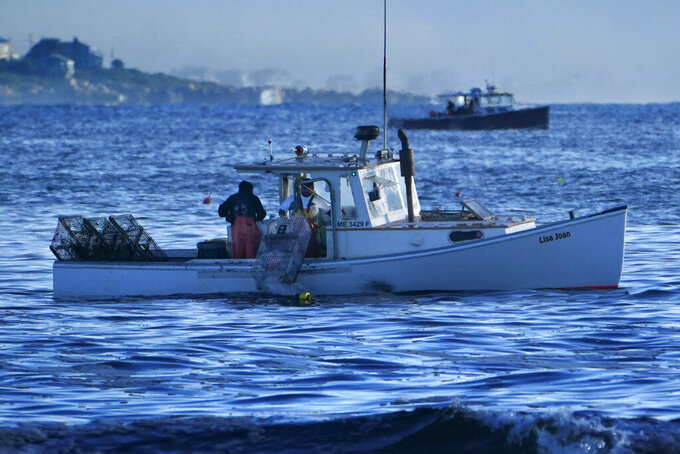 PORTLAND, Maine (AP) — Maine's governor said Tuesday the federal government is moving ahead too quickly with potential new restrictions on the lobster fishing industry, and isn't taking the industry's concerns about the changes into account.

The National Oceanic and Atmospheric Administration recently announced it was seeking input on new rules to reduce risk to rare whales. The North Atlantic right whales number less than 340 and they are vulnerable to entanglement in lobster fishing gear.

Maine Gov. Janet Mills, a Democrat, said the agency's plan to provide only one chance for public comment about the new rules later this month is not sufficient. She wrote in a letter to Commerce Secretary Gina Raimondo, who oversees NOAA, that lack of input from fishermen will put coastal industries and communities at risk.

NOAA and the U.S. Department of Commerce did not respond to requests for comment.

The protection of the lobster industry has emerged as an issue in Mills' reelection race this year. Her opponent, Republican former Gov. Paul LePage, said last week that he would push back at the “Biden Administration’s destructive regulatory policy aimed at destroying the livelihoods of our fishermen over the false notion they are harming whales.”

LePage has accused Mills of not doing enough to support the industry, which is among the most important to the state’s economy. Mills said Tuesday she was pushing back against NOAA actions that carried the possibility of hindering the lobster industry.

The Maine lobster industry, which is one of the most lucrative fishing industries in the U.S., is also reeling from recent losses in court. A judge ruled in July that the federal government has not done enough to protect the whales from entanglement and more rules are needed.

Some retailers have also pledged to stop selling lobster after conservation group Seafood Watch added the seafood to its “red list” of products to avoid due to the threat to whales. Mills and LePage both blasted the group's recommendation.