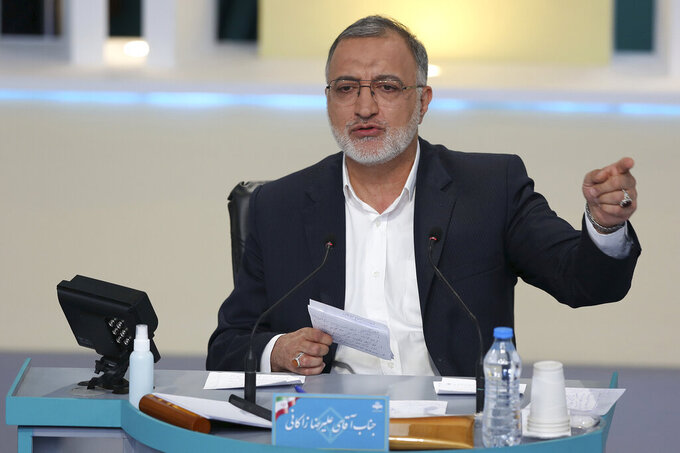 Morteza Fkharinazhad, ASSOCIATED PRESS
FILE - In this June 5, 2021 file photo, made available by the government-affiliated Young Journalists Club, then presidential candidate Alireza Zakani speaks in a televised debate in Tehran, Iran. On Thursday, Sept. 2, 2021, Iran’s state TV is reporting that the country’s Interior Ministry has approved Zakani, 55, as the new hard-line mayor for the capital, Tehran, after a city council election. (Morteza Fakhri Nezhad/YJC via AP, File)

TEHRAN, Iran (AP) — Iran’s state TV is reporting that the country’s Interior Ministry has approved a new hard-line mayor for the capital, Tehran, after a city council election.

Alireza Zakani, 55 heads a parliamentary research center, and he was one of the seven approved 2021 presidential candidates. He withdrew from the race to support the eventual winner, fellow hard-liner Ebrahim Raisi.

Zakani previously served as a lawmaker. He was also the head of the Revolutionary Guard’s volunteer unit at Tehran University in 1999.

Zakani replaces Pirouz Hanachi, an architecture professor at the Fine Arts Faculty of Tehran University. He had also previously served as the deputy mayor for urban development.