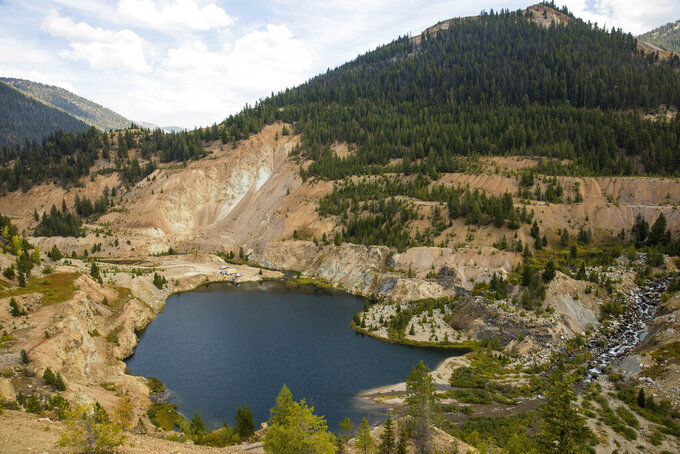 Riley Bunch, ASSOCIATED PRESS
FILE - The Yellow Pine Pit open-pit gold mine is shown on Sept. 19, 2018, in the Stibnite Mining District in central Idaho. The Nez Perce Tribe and two conservation groups say Idaho officials violated the Clean Air Act as well as the state's regulations by issuing an air quality permit for a proposed gold mine in west-central Idaho. (Riley Bunch/Idaho Press-Tribune via AP, File)

BOISE, Idaho (AP) — Idaho officials violated the federal Clean Air Act as well as the state’s regulations by issuing an air quality permit for a proposed gold mine in west-central Idaho, the Nez Perce Tribe and two conservation groups said.

The department in June issued the permit to Perpetua Resources Idaho and its Stibnite Gold Project about 40 miles east of McCall.

“The (permit) being challenged here authorizes emissions of air pollutants from the (Stibnite Gold Project) that will occur over the mine’s anticipated 16-year life span,” the petition states. “These emissions include massive quantities of dust generated by mining, hauling, and processing. The dust includes particulate matter and arsenic — pollutants which can cause serious harm to human health and the environment.”

Mining in the area dates back more than a century and has resulted in two open pits, including one that has been blocking a salmon spawning stream since the 1930s. The site also has extensive tailings left from mining operations that are the source of elevated levels of arsenic.

Perpetua Resources' plan involves expanding mining in the area but also restoring old mining areas in the process, ultimately restoring the entire area when mining is finished. Plans call for creating a third open-pit mine in the area.

The company has said the area still contains more than 4 million ounces of gold and more than 100 million pounds of antimony. Antimony is used in lead for storage batteries as well as a flame retardant. The company also says the mines will create hundreds of jobs.

“The Stibnite Gold Project is designed to be protective of Idaho’s people and the environment, while redeveloping and improving existing conditions at an abandoned mine site,” Perpetua Resources spokeswoman McKinsey Lyon said in a statement. “Those challenging this permit may not like mining activity, but that does not invalidate a permit that meets the requirements of the law and was issued only after robust scientific analysis and public input.”

The Nez Perce Tribe says the project is within its aboriginal homeland where the tribe has treaty rights.

The U.S. Forest Service is conducting an environmental review of the project. It's not clear when a final decision will be made on whether the project can move forward.